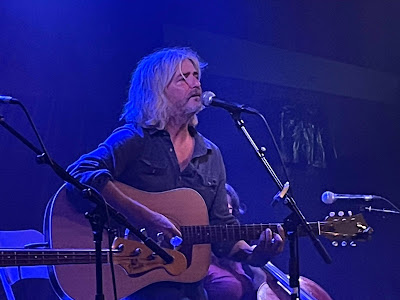 John Bramwell made the short trip across the Pennines to the historic Leadmill venue in Sheffield for the latest in his series of shows to preview his forthcoming The Light Fantastic album as well as delight the audience with a series of old I Am Kloot classics accompanied by Dave Fidler and Harriet Bradshaw. Support came from Howarth.

Local singer-songwriter Howarth opens up the evening with a half-hour set of his own creations as well as an opening cover of Patsy Cline's You Belong To Me. Immediately likeable, he jokes about telling audience members at the bar that the support is shit before coming on and pissing himself as a kid on holiday, but it's his songs that impress most. Personal and affecting, with a rich voice that heightens the feeling that these songs have been lived in and through, the likes of Missing and An Hour Or Two are well-crafted songs that hold the audience's attention, something a support often isn't able to do whilst the final song Love Is Blind is probably the best of the lot. 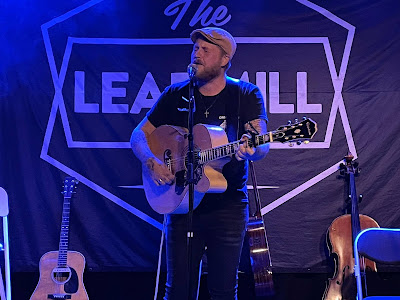 Seeing John Bramwell perform without a guitar in hand isn't something we'd ever envisaged, but for the opening song of the evening, it's exactly what we witness. Sky Full Of Thunder And Lightning, one of the series of new tracks performed tonight, sees Dave on acoustic guitar and Harriet on cello, both also providing beautiful vocal harmonies. The Light Fantastic, the title track from the album John and the Full Harmonic Convergence (of which he, Dave and Harriet form three-fifths of) follows and leaves an equally strong impression - confirming John's half-joking half-serious assertion that he's back. On the basis of the significant amount of new material tonight, he's writing material now that's at least the equal of anything he's done before and with Dave and Harriet in tow, he looks like he's enjoying it more than he ever has, and the Sheffield audience pick up on this and respond accordingly.

Time's Arrow and Who Is Anybody Anyway from his solo Leave Alone The Empty Spaces are augmented by the other two as is I Am The Sky, from The Light Fantastic but previously revealed as a single in 2019. The chemistry between the three is clear as is the respect and love from the Sheffield audience who are appreciative and responsive. The trio of It's Just You, Leave No Traces and Days Go By, that come together towards the end of the set, are a little more instant and accessible but cut from the same cloth.

They do get their fair share of I Am Kloot tracks in the middle of the set as well as the accordion solo singalong of To The Brink and the traditional closing duo of Northern Skies and Proof that gives us the opportunity to loosen our vocal cords. With cello and two acoustics on the likes of 86 TVs, Mouth On Me and The Same Deep Water As Me, or in some cases just John solo on Astray and At The Sea, the songs come to life, raw, stripped back and with the emotions behind the songs laid stark and bare. The audience's attention, fixated on the stage rather than distracted and chatting as they often are at quiet shows, adds significantly to the moment. 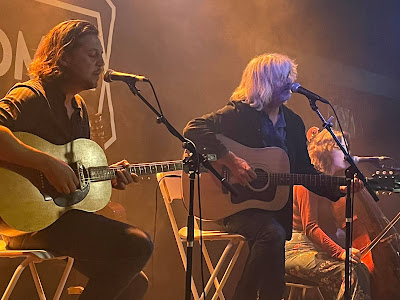 John's on good form all night, laughing that no one enjoys the shows more than him, comparing his long hair and movements to the Muppets movie at the end of each song as he looks to the others, when he holds his guitar up to discuss with Harriet the next song he then states "I wasn't secretly snogging her" which has them and the room in stitches. He champions both Dave and Harriet's solo work, gracefully allowing Harriet two songs and Dave one in the middle of the set to showcase their own work with both of them having new material set for release next year as well. Harriet's Colour And Light and What That Makes Me are intricate and delicate and showcase the range in her voice, whilst Dave's All The While is more jaunty and upbeat with a timeless feel to it.

The long-awaited release of The Light Fantastic will hopefully signal a resurgence in support for John Bramwell. The songs are as a collective the strongest he's written and there's a sense of lightness and joy in the performance of them, accompanied with talented musicians and friends, that will surprise those who haven't followed him on his new journey. Not for him the life of travelling the country resting on past laurels, as he could quite easily do given the strength of his back catalogue - like the best artists the creative urges are still strong and vibrant and worth your time and attention.

He played Sky Full Of Thunder And Lightning, The Light Fantastic, Time's Arrow, Who Is Anybody Anyway?, I Am The Sky, 86 TVs, Mouth On Me, Colour And Light (Harriet solo), All The While (Dave solo), What That Makes Me (Harriet solo), Bigger Wheels, The Same Deep Water As Me, Bullets, To The Brink, Astray, At The Sea, I Still Do, It's Just You, Leave No Traces, Days Go By, Northern Skies and Proof.

Email ThisBlogThis!Share to TwitterShare to FacebookShare to Pinterest
Labels: Howarth, I Am Kloot, John Bramwell, John Bramwell And The Full Harmonic Convergence