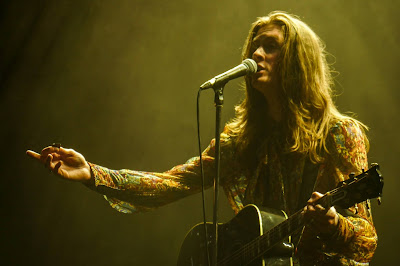 Eighteen months late, Blossoms make their triumphant first headline appearance at a sold out Manchester Arena with a set covering and celebrating their three albums to date and all the crowd favourites that have seen fans of all ages take them to their hearts. Support came from The Lathums and The Magic Gang.

The Lathums are first up once we’ve negotiated our way in through the queues - not sure how much the lads singing “we’ve only come to see The Lathums” would actually see. It’s rare that a band likely to hit number one in the album charts is on so early and the arena is impressively full on the floor for them. They’ve bulked out their sound since we last saw them in preparation for their inevitable onslaught on the nation’s academies and beyond and the likes of The Great Escape, I See Your Ghost and the closing Artificial Screens pack a mighty punch.

They don’t quite do it for us, even though we can appreciate their undoubted ability to craft songs with structure and substance, but listening to the cheers at the end of each song our uncertainty clearly isn't the case for the majority of people in the venue and given their admirable work ethic and commitment to connect with their growing dedicated fan base, you wouldn't bet against them headlining this place one day in the not too distant future. Hopefully though they'll be given the chance to grow and their meteoric rise so far be tempered to allow them to develop further as a band in the same way the headliners have been.

The Magic Gang have been reduced to a threesome tonight due to the dreaded COVID and it's a brave move to play this show without Christian but if they hadn't told you they were a man down you wouldn't have known. They trade in big melodic songs with vocal harmonies to boot and the likes of one of their earliest tracks Jasmine and their last two - What Have You Got To Lose and How Can I Compete - are fine examples of these. Even without an excited local fanbase like The Lathums to back them up, the arena has pretty much filled up by the time they're on and they get a great response from a crowd who are here because of their love of such songs. 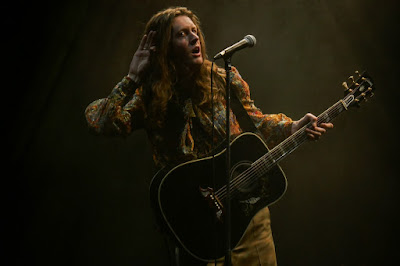 It's Blossoms' night though. The standard pre-show fare (Courteeners, Rick Astley, Sweet Caroline, Queen), sets the crowd's mood at the right level and there's a deafening roar that accompanies them launching into Your Girlfriend and a relentless six-song opening salvo barely pausing for breath between songs. Tom's standard introduction, a reassuring reminder of all the way back to their 2013 / 2014 shows, "Good evening Manchester, we are Blossoms from Stockport" is segued effortlessly into the middle of There's A Reason Why, just after the chorus has sent fifteen thousand sets of arms skyward for the first of many times all night.

We've followed their journey from doing their first ever sit down press interview at the Blue Cat in Heaton Moor and their early shows just round the corner from here at Night And Day, The Ruby Lounge, Sound Control and their rise through the mid-size venues to here and it feels like the perfect moment for them to cement this as the level they're now operating at. They look and sound like this is their natural home, even throwing in a costume change for the encore. There's not a single lull in their ninety-minute set; across three albums they've created the most impressive indie-pop catalogue of their generation, fusing so many little subtle influences into these songs, a half-snatched twisted line here, a between-song gesture there (Tom spelling out Oh No I Think I'm In Love With You is pure Jarvis Cocker FEELING CALLED LOVE). It's why as you look around there's young and old here, joined in unison and celebration. 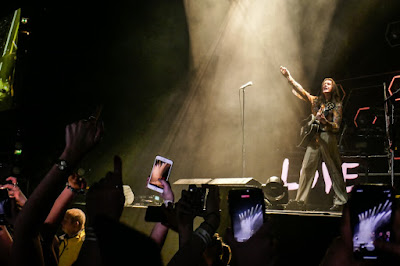 Assured and confident, Tom is in his element, facial expression beamed to the big screen here, hip sway or shake there, lyrical tweak ("I picture me, and fifteen thousand people, pleasantly, then I'll hold you in my favourite room) thrown in as well as his customary band introductions across the course of the evening and strutting round the stage to each of them at one point or another during the night. Blossoms have always had a gang of friends feel to them and it's never left them.

There's no special guests as some may have hoped, but that's a good thing in our book. This was Blossoms' big statement show and as the night progressed we realised our initial reticence with the Rick Astley collaboration was that we actually just want to hear Blossoms play Blossoms songs. They still do however though add an instrumental end section that incorporates Blue Monday into Between The Eyes and Tom adds parts of You're Gorgeous and Half The World Away into the end of Your Favourite Room. With album four in the can ready for release, and Care For, the recent single and one song from it that's played tonight already fitting seamlessly in alongside more familiar songs, hopefully The Smiths shows will be a fun distraction then back to business. 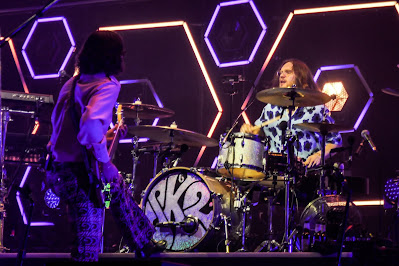 We're drawn back to the fact though that this is a celebration, eighteen months delayed, of a band confirming its status, of filling a space that they could only have dreamed of eight years ago as they made their formative steps. But tonight felt like they were in their natural home, the likes of Blow, Cut Me And I'll Bleed and Blown Rose may have been there from those early shows but they have grown in stature and form with the band, whilst the tracks from last year's number one Foolish Loving Spaces album expand to fill this space with ten of them on stage at points in the show. They fit seamlessly together as well, a sign that Blossoms know their sound, what works and have evolved it over time without cutting it up and starting again and it makes for a night that flows perfectly.

We leave like everyone else euphoric after an hour and a half, topped off by fifteen thousand of us losing our collective shit to Charlemagne, immersed in the most immediate joyous songs that have come out of our extended city in the last few years delivered by a band that has worked their arses off to get to where they have, doing the hard miles that some think beneath them whilst retaining an accessibility and openness to their fans, remembering who helped to put them where they are. This was their night, but it was also ours. 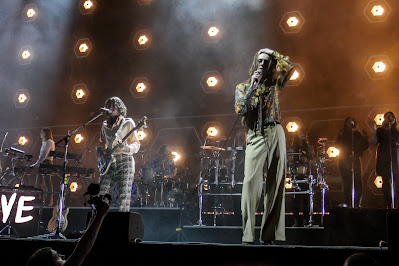 It almost feels like a guilty pleasure to declare your love for Blossoms in some quarters, like success is a dirty thing when standing on that stage has to be the dream of any band starting out in this city. There's nothing guilty and everything pleasurable here though - a band truly coming of age and making the big step up we knew they were capable of at the right moment. We left the arena buzzing and feeling like a proud parent.

photos by At Most One Tour - do not share without permission

Blossoms played Your Girlfriend, There's A Reason Why, I Can't Stand It, Getaway, My Swimming Brain, The Keeper, Honey Sweet, Cut Me And I'll Bleed, Blown Rose, Sunday Was A Friend Of Mine, If You Think This Is Real Life, Falling For Someone, Blow, Between The Eyes, Like Gravity, My Favourite Room, Care For, Oh No I Think I'm In Love, At Most A Kiss and Charlemagne.

Email ThisBlogThis!Share to TwitterShare to FacebookShare to Pinterest
Labels: Blossoms, The Lathums, The Magic Gang