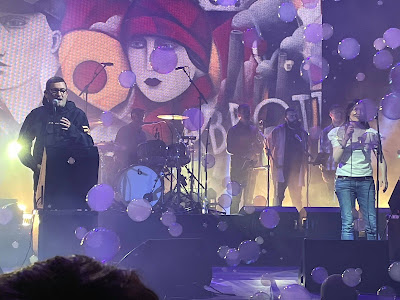 Two songs in and Paul Heaton thanks us for a number of things, being careful, being patient after the multiple reschedulings of this show, for giving him and Jacqui their first number one in twenty three years with the appropriately titled Manchester Calling and telling us that we deserve "a good night out." With the most endearing duo around that was pretty much guaranteed as they ran through a mammoth twenty-five song set calling in at The Housemartins, The Beautiful South, Biscuit Boy and the growing Heaton / Abbott catalogue.

A Heaton and Abbott show at Castlefield Bowl feels like a ritual now; a stopping-off point on every album cycle tour which comes around every couple of years because of the prolific songwriting efforts of Paul and songwriting partner Jonny Lexus who's on stage tonight on lead guitar. It's a coming together to celebrate, to sing along and reminisce and pay homage to a lyricist who has for close on to forty years written songs that have engrained themselves in the psyche of music lovers across the land. Jacqui is far more than a sidekick to him though, she's the sweet to his sour, the ying to his yang and whilst the singing styles of the two are quite contradictory, they are also the perfect complement.

Tonight's setlist is one of the most comprehensive for some time. It starts with The Only Exercise I Get Is You, Manchester Calling's opening track and then moves through The Housemartins' Five Get Over Excited, the Beautiful South standard Old Red Eyes and 2017's Crooked Calypso's I Gotta Praise. The songs come from different eras and times yet feel joined together by a symbiotic bond whilst still proudly wearing their own heritage on their sleeve. They're followed by an obscure Housemartins b-side I Smell The Winter, which Paul tells us they played once back in the day and then laughingly tells us they'll probably only play it once now as the only people who know the lyrics will be stalkers or killers with the sort of dry acerbic wit that is liberally applied throughout these songs and which form part of their timeless appeal. 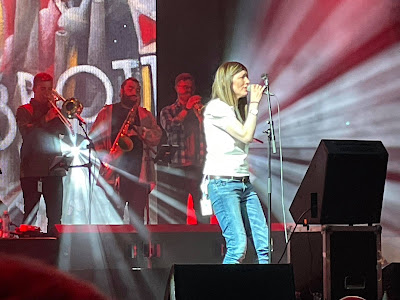 Jacqui takes centre stage on Rotterdam and, a few songs later, Everybody's Talkin', which Paul tells us was the first song she every sang at school. She always seems slightly taken aback and surprised by the adulation she gets from the audience when she sings these songs as if she's just doing what she loves most and comes naturally to her, but it's every bit deserved and exactly why there's two instead of one names above the door.

The middle section of the set focuses heavily on their more recent work - Crooked Calypso's She's Got The Garden, Wisdom, Laughter and Lines' I Don't See Them, What Have We Become's DIY and Manchester Calling's A Good Day Is Hard To Find nestled around a beautiful emotionally tender Prettiest Eyes and a surprise resurrection of Paul's Biscuit Boy persona's Poems track. The songs are subtly augmented by brass, not too overpowering but strong enough to make its presence felt in the right places.

Paul gives a shout out to his neighbours who he's put on the guestlist as thanks for appearing in the video to A Good Day Is Hard To Find and he apologises to their kids a little later on for the swearing in the socialist hoedown of Heatongrad where they list all the things they'd change if they ruled the world. It's typical of the man, but also of the whole spirit of the evening, the most well-natured crowd we've witnessed in what can often be a bearpit of drunken excesses in the bowl.

Manchester, with its references to rain and most of the suburbs that surround it and its chorus line of "what makes Britain great, makes Manchester yet greater" is the perfect introduction to the back end of the set which serves as a listing of the most recognisable songs of their careers. Song For Whoever is almost taken away from them by the sheer volume of the singing back, whilst that happens during Don't Marry Her, mainly due to the Fuck Me punchline of the chorus. A Little Time is sped up, a nod to not just turning up and playing these songs straight, and it slips wonderfully into a frantic Happy Hour that sees Paul imitate the dad dancing that the rest of us are performing without the benefit of lights on us before You Keep It All In brings the main part of the set to an end. 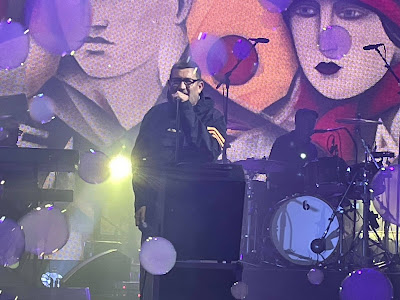 They're not allowed to go anywhere though, a moving I'll Sail This Ship Alone that sees people link arms, hold hands and sing together, something we've missed for a long time and which these songs make you do almost involuntarily, is followed by a frantic Perfect 10 that sees Paul dancing off to the side of the stage as the two vocalists deliver their own views on the pros and cons of the size of the opposite sex before coming to the conclusion that it's what inside that counts the most in much the same way as they themselves are often dismissed as uncool in some way when there's nothing more cool than writing great songs that connect with thousands of people in the way these do.

Caravan Of Love is a glorious singalong that feels as relevant, or actually more so, than it ever did as an antidote to the hate that's peddled by people in positions of power whilst Good As Gold (Stupid As Mud) is a perfect end to the evening, as smoke balls fill the arena and the stage is lit up as they take a well-deserved bow at the end of the night.

Paul and Jacqui have quietly become national treasures, adding to their legacy with each album they produce and each triumphant show like this that they perform. You may know exactly what you're going to get with them, although there are a few surprises dotted around tonight, but what that does is give you an absolutely cast-iron guarantee that you will have the good night out that Paul says that you deserve.

Paul and Jacqui played The Only Exercise I Get Is You, Five Get Over Excited, Old Red Eyes, I Gotta Praise, I Smell Winter, Rotterdam, I Don't See Them, Poems, Everybody's Talkin', She Got The Garden, Prettiest Eyes, A Good Day Is Hard To Find, DIY, Dumb, Manchester, Heatongrad, Song For Whoever, Don't Marry Her, A Little Time, Happy Hour, You Keep It All In, I'll Sail This Ship Alone, Perfect 10, Caravan Of Love and Good As Gold (Stupid As Mud).