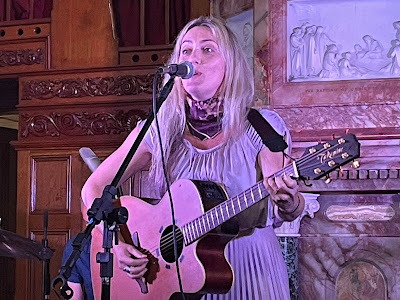 Wainsgate Chapel sits on top of the hills overlooking Hebden Bridge and each year runs a small programme of live music to audiences of up to a hundred and fifty. Due to access being via narrow roads and up steep hills (we know, we walked up), the events take place in daytime with the audience sat in the church pews and on the balcony giving it a really unique feel and creating an intimate space for some very special concerts and Little Sparrow's two-hour two-set performance of tracks from her debut Wishing Tree and forthcoming second album was no exception.

For those not familiar with Little Sparrow's work, it is the project of Katie Ware with a cast of other musicians who perform with her live when they are available as they all are exceptionally talented and in demand in their own right - cellist and vocalist Sarah Dale, guitarist Jonny Lexus (who will be playing to a packed Castlefield Bowl with Paul Heaton and Jacqui Abbott in a few days), drummer and percussionist Mitch Oldham and a special guest Robin Dewhurst, no doubt still coming down from son Josh's sold-out Blossoms show at the MEN Arena the previous night, on piano. Dead centre though is Katie's show-stopping voice whether it be in the high notes, the more tender delicate moments or at the points where the musicians let loose and she has to fight to be heard.

The mammoth eighteen-song set acts both as a reminder of her debut album Wishing Tree, now seven long years old, and its long-awaited follow-up which she tells us is almost complete plus Tender and Dry from her recent Three Songs EP with Sarah and Robin and a couple of covers - Madness's Baggy Trousers and James' Sit Down, over which she plays her indelible mark, stripping down the original and rebuilding them around her rich emotive vocal that casts different light and shade over the words of each of them, a reinvention more than a straight cover.

The interaction between Katie and Sarah is at the heart of everything, the cello provides dramatic effect to these songs which accentuates the drama in the song and the vocals while Sarah's backing vocals often act as a foil or a counter to Katie's, no more so on the encore Sending The Message from Wishing Tree which almost feels like they're dueling to be heard. That's not to downplay the contribution of the others though, the piano fleshes out Tender and Dry Your Eyes, while Mitch's magic box of kit creates subtle and beautiful percussive effects beyond the drums and Jonny's guitar is understated yet crucial to the songs and his backing vocals add further contrast. 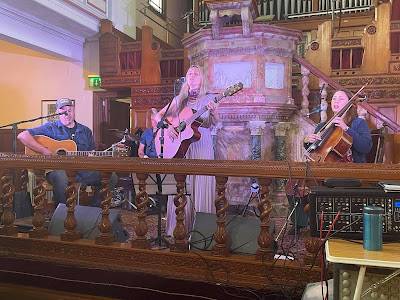 The new songs follow the detailed storytelling pattern of Wishing Tree, Old Ways ("possibly the happiest song I've ever written") and Garden being particular standouts and whilst Katie jokes about being told to write something more commercial, the magic in these songs is not in their radio-friendliness but the beauty in the way they've been crafted. Songs about human emotions and feelings are the order of the day, even if the means of describing them are at times a little eccentric (spiders in Corner Of The Room or bears in Hunted) they touch a raw nerve at many points through the set, something that music should always aim to do and so often doesn't.

The audience are silent, save for Sarah and Mitch's little boy adding noise that adds to the real homely family feel to the whole afternoon with Sarah pushing Katie to tell everyone about the merch on sale and her internet presence. People are here to listen and appreciate music in a stunning setting rather than to chat about this and that and it makes the whole thing even more pleasurable. The building makes the music played in it feel even more special than it is, which is some achievement given the high standards of both songwriting and musicianship that are on display here.

There's no show, no airs and graces, just talented artists doing exactly what they do best with the ever-expanding set of wonderful songs that Katie has in her locker. The second album might be seven years and counting, with real life getting in the way, but it'll be worth every moment of the wait once it arrives if this Sunday afternoon is anything to go by.