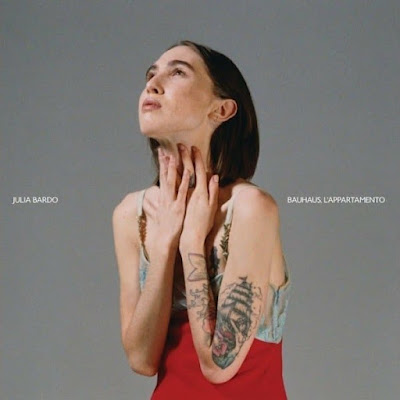 It's two years since Italian-born Julia Bardo, then of Working Men's Club still, announced herself to the world with the stunning debut single Desire, a world away from the band that had broken into daytime 6 Music with their own debut Bad Blood. By the time the Phase EP had come out the following year, just prior to lockdown, Julia was out on her own, newly-signed record deal in hand and already making her mark. A year and a half on, Bauhaus, L'Appartamento, a brand new set of songs prefaced by a few appetiser singles, is out in the world, is a statement of intent yet also a revealing honest laying bare of all the uncertainties of loving and living far from home.

Right from the opening bars of The Most, which have a nagging resemblence to The Smiths' Jeane, Bauhaus, L'Appartamento has a real sense of introspection as if being placed in front of a microphone is a catalyst for a series of heart-to-heart chats with whoever is there to listen.

The Most's ridiculously hopelessly head-over-heels simple declaration "I need you here, because I love you the most" might read as that on first listen, but as the record progresses you can't help but realise it also hides a sense of loneliness and uncertainty, unsurprising given the album has been created in a time where Julia couldn't visit her homeland. Singles Into Your Eyes ("I've never felt so lonely, baby, no, I've never been so alone") and It's Okay (To Not Be Okay) bring this into plain sight; a reminder that you don't have to be a loud young man to be able to articulate in music that we live in a fucked-up world where we're all struggling to find our own place and sense of belonging - and in many ways it feels much starker being sung in a lightly-accented softer voice.

Standing feeling alone in a full room, imposter syndrome and the feeling that whatever we do isn't quite good enough (even though it usually is) are common feelings, but ones that are very rarely expressed with such clarity or eloquence. Love Out Of Control feels so helpless - "nothing works, works for me" - and vulnerable whilst Do This To Me's repetition of "I still don't understand why you do this to me" propels you into a headspin.

The mood swings, the sense of not belonging that plague many of us, the contradictions in our trains of thought are laid bare in The Greatest and it's unsettling without the aggression or anger that usually comes with it - the opening lines of "I always wanted to be the greatest, I always wanted to be adored" appear to be the polar opposite of "I never wanted to open my heart to you, I'm still here alone and I don't need anyone" that follow, yet by the next time the line comes around, the 'I don't need anyone' is replaced by 'I want to be adored.'

Bauhaus L'Appartamento is a record for every mood - you can allow it to wash over you, Julia's vocals soothing you over the music which lets her take centre stage, or you can dive in, immerse yourself in the sadness, uncertainty and romantic optimism that runs right through it if you reach under the surface - and find it more relatable than you'd think. It's full of hidden depths, new revelations, subtle vocal intonation here, a slight change of direction there, that makes it a fascinating rabbit hole of an album with something new around each corner.