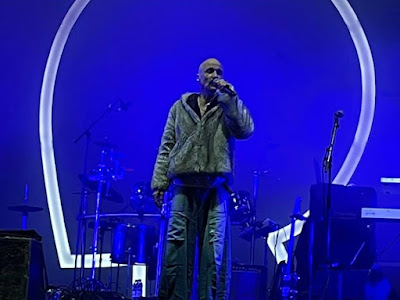 James' summer of festival shows moved on to Newcastle Exhibition Park where they headlined an event For The NHS supported across two stages by Zuzu, Beth Macari, Cruel Hearts Club and The Voluntears.

On entering the site we hear a band sound checking on a not very well-advertised second stage and as there are absolutely no stage times available, either on line or posted around the festival site, we have no idea who they are or when they're on. We hang around for five minutes and they start playing, battling against the bleed from the main stage from which the separation is nothing more than one row of trees or bushes. The sound from the main stage is louder ten feet in front of the second stage than it is the first and ridiculously bands are timed to clash and then there's gaps, including a half hour one around 7pm, where there's no music.

It feels disorganised, chaotic and whilst the facilities are thankfully not challenged by a crowd of about seven thousand, they'll be pushed to the limit for three days of thirteen thousand consecutively. It feels like it's been put together on the cheap with the audience as a minor concern. The staff are excellent on the ground, but you feel they're let down by the people in charge, which is no great surprise given who the organisers are. 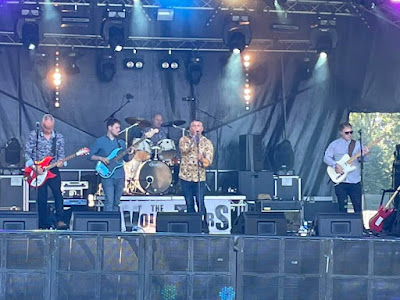 That band are The Voluntears and the five-piece produce an energetic set of post-punk songs that remind us of many of the bands from that scene in its early heyday. They make light of the small audience, offering us drinks and telling us we're beautiful, while running through a set with a surprising level of variety and melodies and harmonies to go with the riffs that lead the songs. They're not afraid to slow things down at times without losing the crowd that have been drawn across from the main stage or have stopped curiously as they enter the site. Can't Take No More and Naughty Neighbours are particular highlights and their final song Rosey Road has the audience arms aloft. It's a shame they were let down by the festival's poor communications because they deserved a much bigger audience. 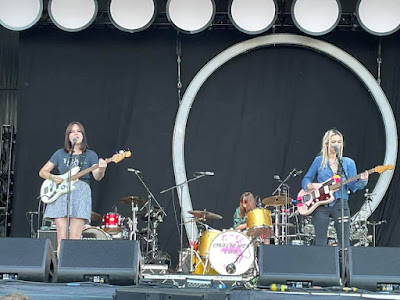 Cruel Hearts Club are next on the main stage and the trio, sisters Gita and Edie who share vocal responsibilities as well as guitars and drummer Gabi, deliver a perfect early evening set. Having ditched their classical training for something more rock and roll although they do slow things down at points in the set. However, they're at their best when they're loudest and angriest like Suck It Up and early single Dirty Little Scum and can't even be derailed by an unfortunate wardrobe mishap when Edie removes her jacket and go down well with the growing Newcastle crowd. 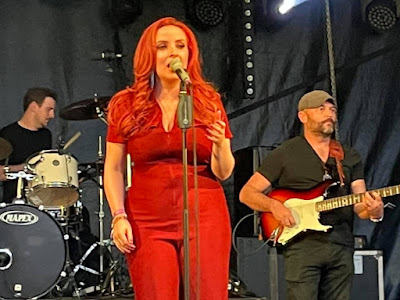 We'd seen Beth Macari about three years ago when she played a lead vocal in the orchestral Motown and Northern Soul night at the Bridgewater Hall in Manchester and were keen to see her on her own. For someone who trades in big soulful numbers, she has the prerequisite strength in her voice that possesses the depth and emotion to take on a set of her own songs as well as a fabulous cover of Dua Lipa's Levitating. It's easy to see why Gotta Get Back reached the UK Soul charts and her debut single Clone helped her make her name for herself, backed here by a strong band who provide her with the platform to unleash her voice. She acknowledges three young girls dancing down the front and dedicates her final song to her grandma and the NHS and wins over the local crowd with her accent. 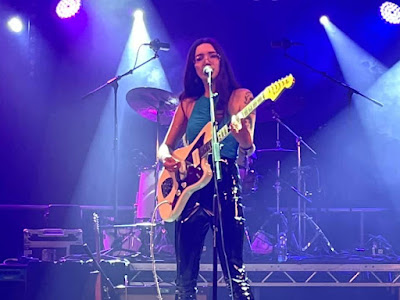 We stay at the second stage for Zuzu, who we are shamefully seeing for the first very time. The communications mean there's only a smattering of people there as she takes to the stage but she immediately charms us, joking that Three Lions by Lightning Seeds, bleeding through the trees, will be the death of her. If it were, she'd go down with a legacy of under-appreciated indie-pop gems that showcase both her exciting voice and her independent free spirit that has won her so many admirers. Tracks are drawn predominantly from her previous singles - the likes of Get Off, How It Feels and Skin And Bone - but there's still space for a few new songs from her Queensway Tunnel debut out in November, in particular The Van Is Evil. Her bubbly positive personality and humour helps make her our favourite Scouser since fellow Evertonian Wayne Rooney stopped knocking them in at the Stretford End. 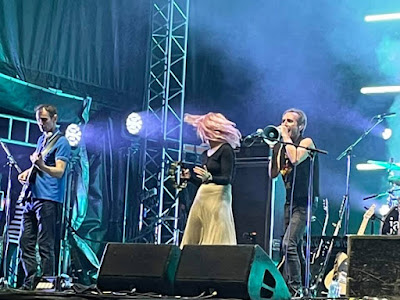 James head onto stage and launch into Isabella from All The Colours Of You and it's clear that, even though this band have played as a nine-piece half a dozen or so times, they're in one of those phases of the band where they spark off each other. Contained to the stage Tim searches looking for connection, finding them with each member of the band at some point in the evening. Born Of Frustration feels bigger and bolder than before whilst Ring The Bells shows how they've been working on the songs and integrating the bigger line-up with Chloe taking a bigger vocal part allowing Andy to add his signature trumpet and experimentation - something that's noticeable as the evening progresses. It's one of those subtleties the expanded line-up offers them.

Before Moving On, Tim explains that they're not going to play Recover, a song about Tim's father-in-law dying of COVID because it's too depressing for the evening, but he insists on taking Johnson to task for the pittance of a pay rise offered to the NHS that's "bullshit" compared to the risk they're putting themselves at, suggesting that he should try it himself before dedicating Moving On to the NHS staff and people who've lost loved ones. The crowd cheer although you suspect the way some of them comment when Tim talks about the political and social issues behind Wherever It Takes Us and All The Colours Of You they enabled it to get their Brexit. 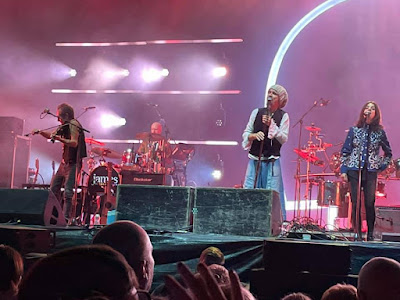 Five-O takes us on wonderful wandering journey, with Saul's violin taking the song off its beaten track, Tim transfixed by his colleague's work like many of the audience around us. Wherever It Takes Us is clearly a band favourite and is evolving before our eyes and ears, but it feels like it's missing something tonight - which may well be the sound that isn't loud enough down the front and seems to be lacking a bit of body to it as if the festival have done it on the cheap for the main stage (the second was fine).

Johnny Yen gets a few roars of recognition with the new semi-improvised section firstly taking us on an instrumental detour before then dealing with Tim's obsession with fire. The new-look James are having a lot of fun with some of these old favourites that haven't been played in a while. Say Something, one of the straight-forward songs in their catalogue and adored by those around us participating in the gig, is a wonderful coming together both on and off stage.

Honest Joe is a surprise inclusion after a long absence and a real indication of how this new James are, like when they've played Stutter in previous gigs, going to deliver some very special nights with this new line-up. Tim alludes to this when he tells us that this is the real James and it makes them fresh and alive and why they're still going. For a band that says it's bedding in, they're still making an awful lot of changes to the setlists. 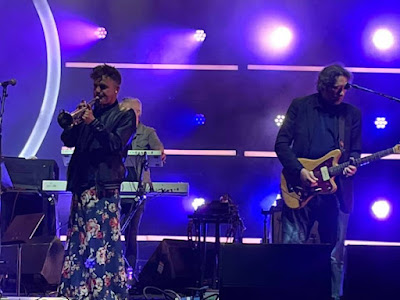 "This is another new song" Saul says deadpan before Tim counts us into a raucous Sit Down. Debbie, not born when this song filled every dance floor in the land, is particularly energetic in the up parts, the extra lyrics from the original version in the second verse almost derail the singalong, but by the time we get to the chorus and the dropdown, we could be in St James Park after a home win rather than another park overlooking the city.

The crowd is very sterile around us all the way through, even for the big-hitters Getting Away With It (All Messed Up), Sometimes, Sound and Come Home that finish off the evening, standing arms folded, complaining at people dancing (swaying rather than anything remotely moshing if we're talking details), chatting incessantly and getting offended at others moving around. Special mention has to go to the group who sang nothing all night until Be My Baby came on after the band left the stage, each of who were holding up a song title written on their phone screens (Laid) through the last three songs. James were never going to read it from that distance - although we were secretly hoping they would and then play something different, but if you go to a gig and behave like that, it's such a shame that you go home disappointed.

It's the opposite of our experiences of Newcastle crowds from the past, particularly at the Academy which was always a highlight of the tour. Tonight was one of those where, from our vantage point at least, the performance didn't get the audience it deserved.

James played Isabella, Born Of Frustration, Ring The Bells, Moving On, Five-O, Wherever It Takes Is, All The Colours Of You, Johnny Yen, Say Something, Honest Joe, Sit Down, Getting Away With It (All Messed Up), Sometimes, Sound and Come Home.

Note there has been much press about SSD, one of the businesses reportedly behind this festival and accusations made. We attended the festival as the guests of one of the band (James) and have made a donation to the Bobby Robson Foundation at the Newcastle Hospitals Charity in lieu of the ticket and spending any money on site. We would not have paid to attend this event.