TRACK OF THE DAY : The Slow Readers Club - Tell No Lies 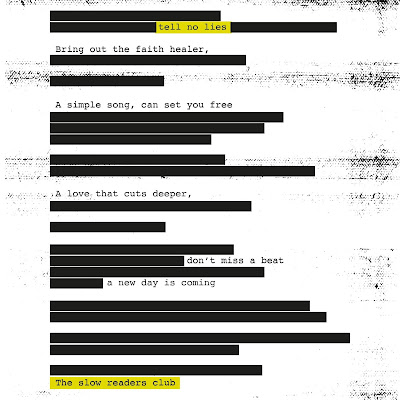 The Slow Readers Club return with Tell No Lies, a brand new single to follow up the top 10 album The Joy Of The Return and 91 Days In Isolation, both released during lockdown ahead of their UK tour that kicks off at Hebden Bridge Trades Club next week. An upbeat stomper of a track, it's accompanied by a video featuring Line Of Duty's Craig Parkinson.

Front man Aaron Starkie explains the meaning behind the lyrics to Tell No Lies - "The song is about music's ability to transport you somewhere else and take away your anxieties for three minutes or so. There's also an acknowledgement that when trying to offer answers or simple life slogans through lyrics you can sometimes feel like a snake oil salesman - 'it's honest work, dear reader, listen close, I'll tell no lies. A simple song can set you free.' It's that premise that brought the image of the faith healer to mind that I reference in the lyrics and we have also explored in the video"

The video came about from a chance meeting with Craig at Kendal Calling, where he revealed he was a fan of the band. Chatting on social media, he offered to be in a video and linking up with Made By Boone the idea for Tell No Lies was born.