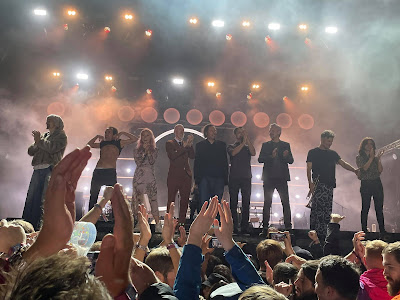 James concluded their 2021 festival season with an eighty-minute set at Glasgow's Playground Festival that mixed most of their biggest and best known songs with new material in a potent mix that lit up a main stage audience that had been passive up to that point.
Worryingly just before James come on stage there's not much of a crowd gathered by the main stage, the barrier at the front is empty (although we do work out it's because you can't actually see the band if you stand there), but in the five minutes before they arrive, it fills up and continues to do so as they draw people forward and under their spell as the set progresses. 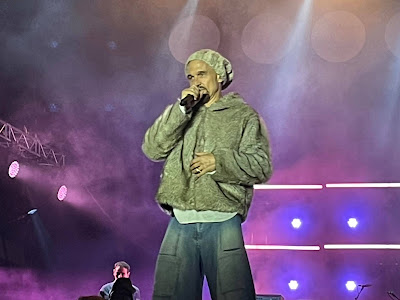 They start with Isabella from All The Colours Of You and you sense from the start that Tim's very aware of the ridiculous distance between audience and band because of the raised area that's been placed in front of the stage, ironically to get performers closer to the crowd. There's little sign of the cold that he's talked about on social media leading up to the gig as he throws himself into the show, thriving off the energy of his band mates and the crowd.
Getting Away With It (All Messed Up) has become an anthem and a motto for the band. Tonight the song takes on a new lease of life, some of the instrumental sections are extended as Adrian is given his head for an impressive solo as Tim bounces round the stage and the others respond accordingly. It feels like there's an unstoppable momentum and unshakeable confidence propelling them to the end of the festival season. 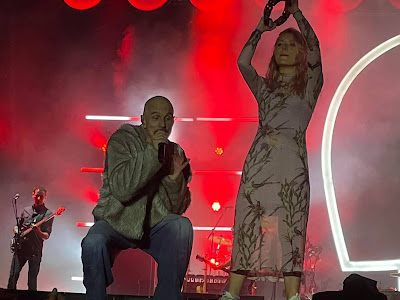 Ring The Bells is the perfect song for that mood. Tim introduces it by telling us to enjoy every second and to live for the moment given the collective ordeal we've gone through over the last eighteen months. A Glaswegian crowd needs little encouragement to do just that, and out in the open air there's a celebratory feeling without the edge that sometimes overshadows indoor shows. It stops raining too.
It's then time for two tracks from All The Colours Of You. The title track fizzes and sparks and it feels like they've really nailed this one now whilst Wherever It Takes Us feels like they're still trying to find the final piece of the jigsaw which isn't surprising as it's a song of many varied parts fused together. When they get it right it has the potential with its soaring chorus to be taken away from them by an audience in the way Many Faces did with the last album, but it's not quite there yet.
Born Of Frustration has benefitted from a reinvention on this run of festival shows and is the highlight of the night. With two lots of drums, a slowed down pace and an extended breakdown it feels completely fresh and invigorated whilst, of course, retaining everything that makes it such a crowd favourite. They then have an onstage discussion as what to play next and land on Honest Joe, one of our personal live favourites as it gives them the opportunity to stretch their wings and demonstrate a side of their sound and creative process that often gets lost in the glow of their biggest hits. You sense though they'd play these songs all night if they think they'd get away with it. 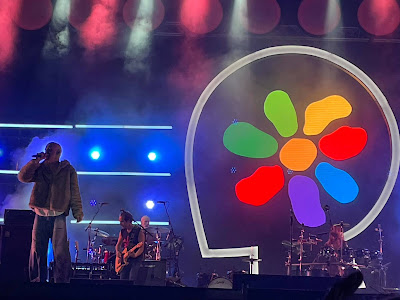 The next choice they go for is Come Home, its siren call introduction getting one of the biggest roars of the night as Debbie accompanies Tim down to the front of the stage. When Tim sings "after thirty years I've become my fears" thirty years after the song was a hit with a woman next to him who hasn't reached that milestone. Tomorrow keeps the pace at fever pitch, delivered musically and vocally with a real sense of urgency that really sets James apart from the pack when they're in this kind of mood.
“Glasgow, do something out of character” Tim urges as the opening bars of Sound rumble. Glasgow does act in character, chanting “here we, here we, here we fucking go” as it does whenever a band gives them a ten second instrumental section to play with. Tim’s made his way down to the front to survey the heaving mass bouncing as they do. It’s curtailed a little at the end, conscious of the limits on the set length and their desire to do an encore as if they were the headliners of the festival.
That encore starts with Beautiful Beaches, a song Tim tells us to imagine is about going to Spain on holiday rather than about him fleeing the fires near his California home. It ends with him at the back of the stage pushing Debbie on to batter the living hell out of her drum kits. It’s almost lost in the lack of volume and the distance from the front of the crowd to the back of the stage but the power of the drumming and the whirlwind of flying blonde hair on the big screen ensures it isn’t. 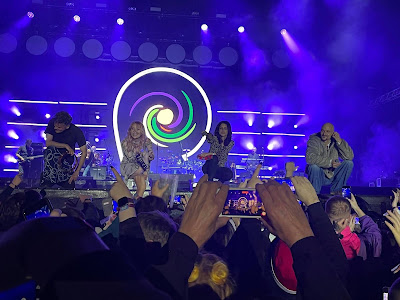 They finish with the biggest of big hitters - Sit Down and Laid. A false count in almost catches the audience out, the added lines in the second verse do, but as it hits the breakdown and Tim, Andy, Chloe and Debbie come down to the front and sit down and we all find ourselves ridiculous then explodes back into glorious life before Tim leads us in an accapella refrain, it proves those wrong that doubt it can be played and still mean something and everything. The coming together it demands is exactly what we need right now. Laid hasn't really featured, although these days it seems to be the most wanted song of theirs particularly with the younger audience, but tonight it's rolled out as if James are going full out to leave the audience buzzing and anything that follows being an anti-climax. The response is delirious and the reception they get rapturous as they leave the stage for the second time.
What happens next is bizarre. After a couple of minutes they come back to play a second encore of Sometimes, but with key bits of kit disconnected and not easily made operational again, it just isn't going to happen within their allotted time, so they have to take the acclaim of the crowd without playing the song. It's not quite snatching defeat from the jaws of victory, but it's a very surreal ending to a set that won over the initially cautious crowd with its energy and uncompromising power.
James played Isabella, Getting Away With It (All Messed Up), Ring The Bells, All The Colours Of You, Wherever It Takes Us, Born Of Frustration, Honest Joe, Come Home, Tomorrow, Sound, Beautiful Beaches, Sit Down and Laid