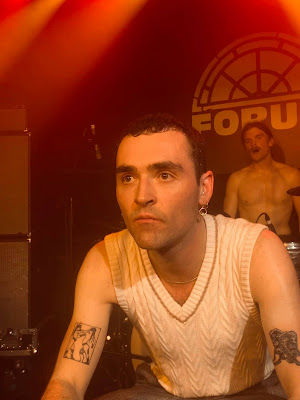 Tunbridge Wells Forum witnessed the unforgettable return of The Murder Capital as the band steamrollered through a blistering set of old and new songs on an emotionally charged evening.

For many it was their first outing on the live music scene in well over a year and for fans and band alike it was the perfect release as the band played with their usual high intensity and raw emotion.

With no support act and the anticipation of new songs, fuelled further by posters dotted about the venue asking us not to record any of the upcoming new material, the adoring crowd were already whipped into a frenzy. This was further enhanced as the opening bars of Dear James belted out through the PA system. That, as we know, was the signal that their triumphant return was imminent. 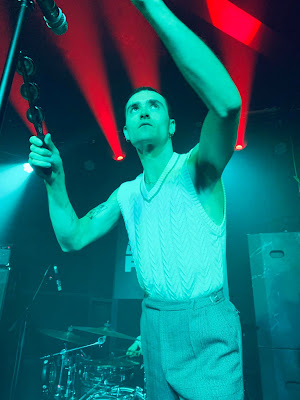 Damien, Cathal, Diarmuid and Gabe entered the fray to rapturous applause. All grinning from ear to ear and clearly delighted to be back doing what they do best. That is, making great music and feeding off each other and a ravenous crowd desperate for their fix.

Last to enter the stage was a visibly emotional and hyped James. Firstly handing out flowers to the lucky ones who will surely treasure such a gift before getting down to the serious business of playing like his and his best friends lives depend on it.

They immediately flung themselves head first and full throttle into For Everything. This meant everything. It was everything for that moment in time. All those months of pent up frustration released through the speakers and the microphone. The sheer joy etched on the faces around me and in front of me too.

More Is Less followed. A song that demands more and the two-way bond between crowd and band was further enhanced. Gabe, a real live wire throughout, bouncing off the walls and coaxing and cajoling us. Cathal lost in the moment frantically pulling the strings. Damien, nonchalantly playing and making it look so easy. Big D enhancing his reputation as one of the greatest drummers and James giving more until there’s nothing left to give.

Green & Blue is epic. Bigger sounding and more beautiful than ever. It’s rousing, expansive and anthemic to the point we’re all teetering on the edge. Three songs in and we’re exhausted with the emotion and the fast pace.

First new song intriguingly coded *WHTD is perfect for the moment. A slow burner that builds and builds until there’s no going back. It’s fresh and it’s exciting. 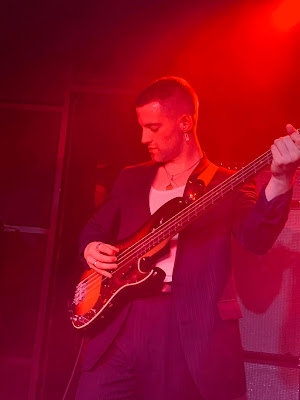 Slowdance I and II remind us what we’ve been missing for so long. Artists at work making incredible music that twists and turns and takes us on a journey to places that we might not want to go but we do because that is the impact this band has on people.

They continue to push and pull us with another new song *C. The audience hangs on every word, note and drumbeat, a hugely respectful crowd showing their appreciation of the new material.

On Twisted Ground is as brutal and beautiful as ever. Gabe’s bass sending shivers down the spine. James’ passionate vocal making the hairs on the back of your neck stand up. We close our eyes. We drift away. We cry. We embrace.

There’s a lot of love in the room accentuated further by a stunning version of Love Love Love. It’s hard to ignore the fact that the old songs still sound fresh given the extended hiatus from the live scene.

We’re treated to two further new tracks in *TLB and *TL. It’s *TL that stands out for me. Both songs again building up to the point of no return with the latter seeing the band rocking out like never before. The reaction from the crowd tells us we’re delighted with the new songs and the smiles on the faces of all band members is a sight to behold.

Don’t Cling To Life is riotous. We dance and we cry together. A celebration of everything that’s happened over the last eighteen months and more. All holed up in two and a half minutes of madness. Those down the front taking care of each other as the mosh pit intensifies. Only good things in this group. 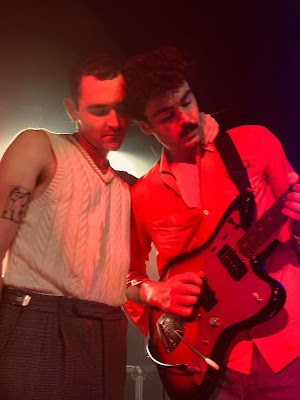 Feeling Fades closes the set. The love for this band never fades and the now customary kneeling down pre-explosive intro to the song only heightens the expectation that this is going to be wild and it is. James refrains from entering the crowd for obvious reasons but that doesn’t mean he and the rest of the band are holding back. If anything they’re letting themselves go further. Their actions inspire us to leave nothing behind on the most special of nights.

New songs and a positive energy mean it’s safe to say the future of music is in good hands with The Murder Capital. Seeing them return to the live stage again has been the perfect boost and a great distraction from all the shit going on in the world right now. For that we should be eternally grateful.