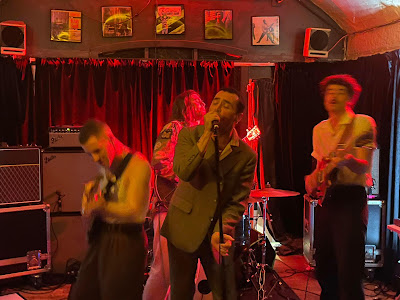 The sweaty hot back room of McChuills bar in the East End of Glasgow is the setting for two of the most vital bands of our time to play an intimate Transmit Festival aftershow party for Yala Records. We make the pilgrimage north of the border to experience the sort of night that we've been robbed of for the last eighteen months - a reminder of why music, lived and breathed with like-minded souls, is the best medicine and the cure for so many ills.

VLURE are a unique proposition; a band that is going to stand out from the crowd and make a difference. This is a hometown crowd, granted, but they threaten at points to completely overshadow the headliners. Whether that be the songs, and they possess a set full of gargantuan synth-driven songs with anthemic choruses but delivered with an intensity and power that's claustrophobic and overwhelming in such a confined space, or the manner in which they're delivered with Hamish either up on the barrier or in among us, eyeball to eyeball, fist beating against his chest, forehead to forehead with the audience, planting a soft kiss on the brow of friends and of Conor who joins him on the floor. It's impossible not to be drawn in and immersed in the sheer magnetic draw which they possess. 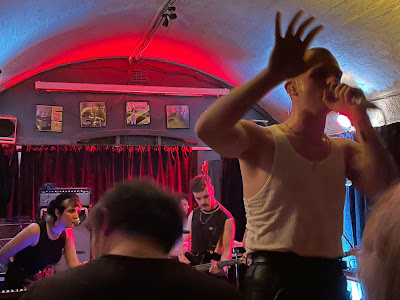 Recent single Show Me How To Live is dispatched early alongside their debut calling card Desire, but no worries VLURE have a set of songs already that will leave an indelible mark over the next twelve months and beyond. Shattered Faith has already done that, but The Storm, with its unanswerable yet vital question "what's life but a storm where's the sense but a norm" repeated over and over in desperate search of an answer, whilst the closing Euphoria has hearts beating so fast that they threaten to burst out of our chests such is the uplifting communal spirit that lives in every note and word of it, everything that music that really matters should be. They're special, very very special, a band to fall in love with and to.
Speaking of that, it's exactly what we did with The Murder Capital two and a bit short yet very long years ago. We spend just six and a half hours in Glasgow for this gig, spending eight getting there and with no sleep. There's probably one other band in the world we'd do that for. Tonight is different though. Whilst two-thirds of the set hail from their debut When I Have Fears, a record that has saved us, coaxed us through dark times and taught us to love the people around us and the importance of laying everything bare to those that care, there's four new songs tasked with the virtually impossible job of having the same impact on first impression whilst also satisfying the commercial paymasters who you see as painting them as the new Idles or Fontaines or whoever.
Pleasingly there's no obvious single among the four new tracks, labelled on the setlist only by initials from which it's difficult to work out song titles from key lyric lines. There's the intense use of repetition that served them well on When I Have Fears, but the four of them sound like a band pushing their boundaries, creating for themselves in the knowledge that will allow them to make new connections and forge even deeper ones with those who already know. As James closes his eyes or looks skyward during TLB and TL, the latter two of the four, we want to know more, dive in and lose ourselves. They're not rushing them, rightly so, because they have set the bar so high. 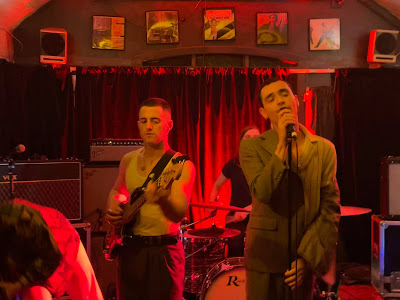 Hearing those eight songs from When I Have Fears, eighteen months after our last meeting at the 100 Club in London just before the world went to shit, feels like the return of a sense of something approaching normality. The spirit of love for your brothers and sisters, the imploring reminder that the people around you are the most important thing in the world, are played out on stage and in the music and words, whether it be the thrilling headrush of Don't Cling To Life, More Is Less and Feeling Fades or in the more considered yet no less vital moments of Love Love Love and Green And Blue. When we join together to chant the refrain to For Everything, it feels like a couple of hundred people joined as one, each with their own story but coming together with music as the catalyst. And with that, James, Damien, Diarmuid, Cathal and Gabe answer their front man's question of what is the fucking craic.

Email ThisBlogThis!Share to TwitterShare to FacebookShare to Pinterest
Labels: The Murder Capital, VLURE