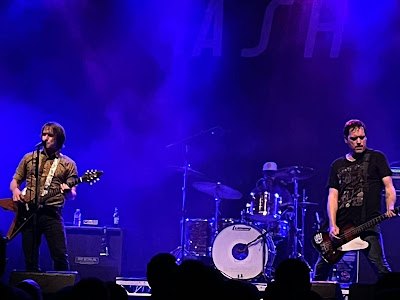 Half an hour before Ash were due on the stage at the Ritz, we were stood in the Night And Day waiting for Tim Burgess to turn up. Bored and spotting our friends from LIINES were heading to Ash, we jumped ship, hotfooted it across town and made it ten minutes before stage time. It was one of the spur of the moment decisions that makes gig going so great and a reminder of what we've missed for the last year and a half.
Speaking of halves, half way through the show we realised that it was half our life ago that we were throwing ourselves round the likes of the Forum and the Astoria and a shed out the back of a venue in Cologne on a hot summer's day to the sounds of Ash's debut album 1977. Since then their star has risen and fallen, risen and fallen again yet the quality of their output has barely diminished, just the interest of radio and press and consequently the more casual fan, and they still are a phenomenal live band that focus on the basics of great songs played well with an infectious energy as the heavy workout the Ritz's sprung floor still gets despite most of the audience probably having a similar revelation as us at some point.
This show had been rearranged four times, which probably explains why we'd missed it, but The Ritz is still pretty full, impressive given it's midweek and some horror stories about poorly attended well-sold gigs. The reason for that becomes evident through the night - Ash never fail to deliver live and they have a back catalogue - and it's a greatest hits collection Teenage Wildlife that they're here belatedly to promote - that ensures they can comfortably play for an hour and a half and everyone will know pretty much every song. 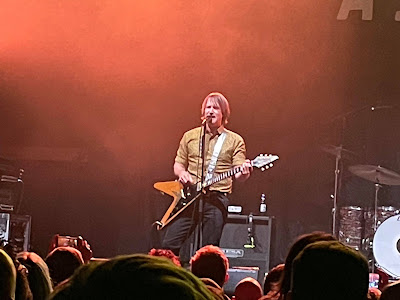 All the hits are present and correct as you'd expect from a greatest hits show. Jack Names The Planets and Kung Fu still have the possessed hundred miles an hour headrush that Ash's earliest singles possessed whilst their development as a band was very much evident on Girl From Mars, Oh Yeah, Angel Interceptor and Goldfinger from their debut. Their other commercial high point, their third album Free All Angels, is equally well-represented with Sometimes, Walking Barefoot, Shining Light and Burn Baby Burn which sends everyone out of the room buzzing, once Rick has orchestrated a full-on karaoke of The Time Of My Life complete with dance moves at the end of the night.
The remainder of the set takes in touchpoints from their other albums and the non-album single A Life Less Ordinary, played early but which generates one of the biggest moshpits of the night. Buzzkill, You Can't Have It All, Cocoon, Arcadia and Orpheus might come from different albums but they still all possess the Ash DNA and the cover of The Only Ones' Another Girl, Another Planet very much doesn't feel out of place. 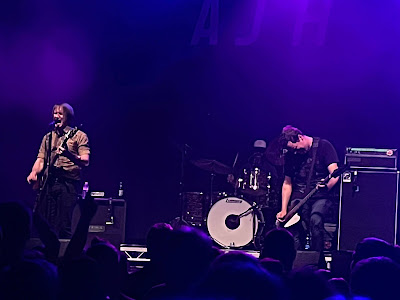 The set-up is simple, a black backdrop with the band name in white letters, minimal lighting and just the three of them - Tim and Mark throwing themselves around the stage, albeit a little more sedately than in their heyday with Rick at the back controlling and dictating the thrilling pace of these songs that young and old around us are singing their hearts out to. There's nothing flash or showy about Ash, even if the guitar solos might be longer than we remember them and the breakdowns encourage a little more crowd participation, but what they remind us is that there's nothing that beats the pleasure of great songs played with energy and passion and the band having as good a time as everyone in the audience.
Ash's official website can be found here. They are on Facebook and Twitter.
They play Leeds Stylus (September 23), London Roundhouse (25), Holmfirth Picturedrome (December 5), Liverpool Arts Club (6), Stoke Sugarmill (7), Limerick Dolan's (9), Galway Roisin Dubh (10), Cork Cyprus Avenue (12), Wexford Crown (13), Dublin Academy (14), Belfast Limelight (16) and Castlebar Royal Theatre (17).
________________________________
Follow Even The Stars on Twitter at @eventhestarsuk and like our Facebook page for all the latest updates
Posted by Even The Stars at 00:14