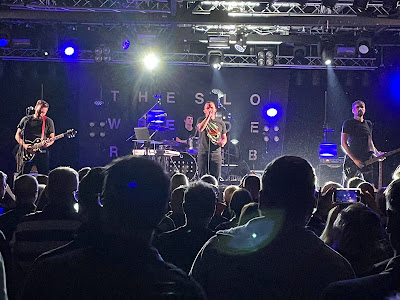 Wigan seems to be a hotbed of new bands at present, led by The Lathums' assault on the nation's charts. It's always a risk for a new band to be thrust into the limelight by such a movement and have the ability to develop at their own pace taken away from them. Stanleys initially seem a little overawed by being on such a huge stage, their first song not really kicking in until they've been on stage a few minutes, but they soon settle into their groove and grow in stature and confidence once they start playing to a room that fills out as their set progresses. 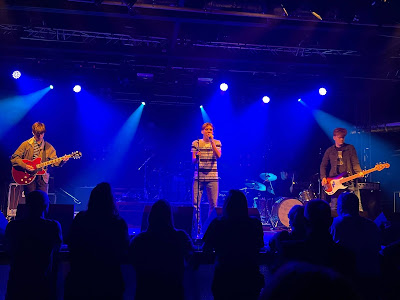 Singles What's Been And Gone and their debut A Better Life are the highlights of a half-hour set that showcases Tom's strong vocal and a tight rhythm section around bassist Harry and drummer Rob with guitarist Jake providing the meat on the bones. There's a great deal of potential here and if the new song they introduce is anything to go by, the progression as a band and as a songwriting unit is already starting to flourish and hopefully they'll be allowed the time and space to discover themselves as a band.

Sheffield's Sheafs are a bit more established, with a debut album in the pipeline for early next year, and it shows immediately. Opening track Thinking Out Loud, the first track on last year's impressive Vox Pop EP that we purchase on the way out, is a fine marker to lay down as it captures much of what Sheafs are about - social commentary set to a soundtrack that sits at the more accessible edges of post-punk and delivered by front man Lawrence with a conviction and assertiveness that comes with full confidence in what they're doing, something we observe the five-piece have in bucket loads as their set progresses. 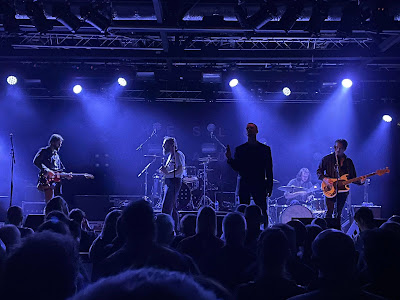 They've been around for knocking on five years now and they've had that time to hone their sound ready for their debut album next year - and the songs from that like Revery, The Room and their set-closer Millenial as well as their most recent single Spectator suggest that they're gathering momentum for a full-on assault next year. Successful support slots like this with established bands whose audience are prime targets for their sound will no doubt do them the world of good as the reaction they get is as strong as bands who've taken some of the Readers fan base with them on the next part of their journey.

It's over five years since we witnessed The Slow Readers Club's debut show at The Magnet (RIP) in front of a dozen or so hardy souls, most of whom are hopefully in the room with us tonight to see the next stage of the deserved but probably unexpected elevation of the band to the point where they can have hundreds of people singing along to every word, chanting the ubiquitous "READERS" lighting up a miserable Monday evening when summer is turning the autumn and the dark nights are drawing in.

What The Slow Readers Club possess, in ever increasing numbers, are songs to drag you from the malaise, awaken you from the tiredness of the start of another working week that's as predictable as the last, and permit you to lose yourself in their music, and do so surrounded by like-minded souls brought together by these anthems, and pretty much every song tonight meets that description. 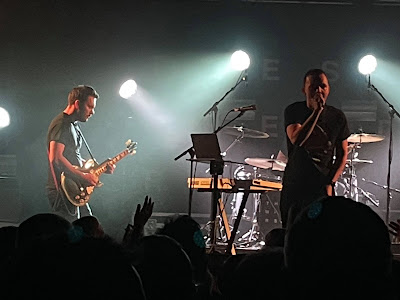 Whether it be the strident Block Out The Sun and Sirens, songs ignored by pretty much the whole world ten years ago, or their most recent Two Minutes Hate and Everything I Own, from last year's 91 Days In Isolation and new single Tell No Lies, the songs are built around the fundamentals that make a great song. Lyrics that you can relate to and by the second chorus feel like you've known all your life, delivered with passion and strength in the vocals sit over a tight as rhythm section and a beat so powerful that your feet move involuntarily even when they pause for breath with the one slower track of the evening, the beautiful wistful tale of lost love that is Don't Mind.

When I Saw A Ghost hits its chorus, it seems like every pair of arms in the place is raised skyward as one, like controlled by remote control from somewhere backstage rather than an instinctive reaction to that moment and what's happening in the room. As the lyrics of recent single Tell No Lies go - "a simple song can set you free, that boy is bouncing, he don't miss a beat" - there's something undeniable about the healing and soothing power of this whole thing. There's few finer proponents, if any, of this around right now. 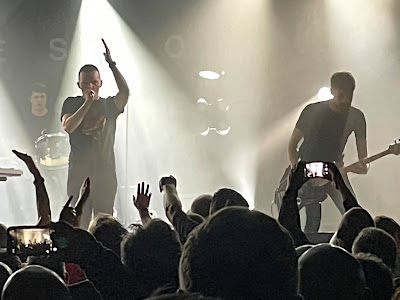 The tracks from last year's top ten album The Joy Of The Return that make up close to a third of the set feel reinvigorated in the live environment, the more pop tones in the production of the record replaced by a harder edged sound without losing focus on the fact that they're simply great songs whatever wrapping you place them in, although we admire Aaron's optimism when he suggests tongue-in-cheek that the crowd should form a circle pit for Killing Me.

They finish on their two biggest songs to date, at least going by the fan reception. Build A Tower's On The TV has the audience singing along to Kurt's guitar line, almost drowning out Aaron's vocals whilst Lunatic connects at the very basest level when those arms are raised skyward again in unison. The world needs connection and unison right now and The Slow Readers Club live experience feels like a very real and effective part of the healing process from the separation we've all endured for the last year and a half.

The Slow Readers Club played Fool For Your Philosophy, You Opened Up My Heart, Plant The Seed, The Wait, Two Minutes Hate, Jericho, Problem Child, Killing Me, Forever In Your Debt, All I Hear, Don't Mind, Everything I Own, Block Out The Sun, Feet On Fire, I Saw A Ghost, Tell No Lies, On The TV and Lunatic.