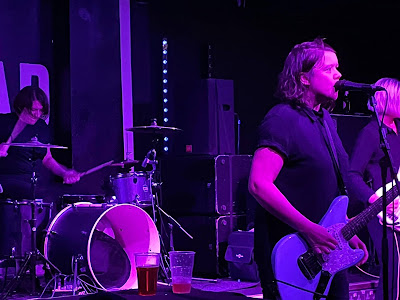 To celebrate the release of their new single Keep on Going, LIINES played their biggest hometown headline show to date at Manchester's Bread Shed on Saturday night supported by Desperate Journalist and The Facades. A seventeen-song set comprised of tracks from their debut Stop-Start and their unreleased follow-up delighted a passionate and supportive crowd. 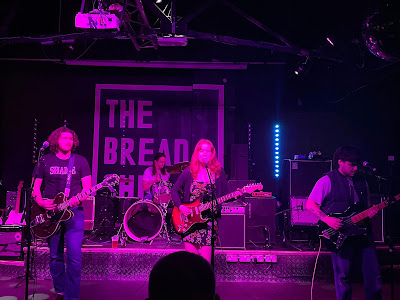 The Facades might come from Wigan but their sound doesn't. Don't, whatever you do, lump them in with The Lathums and the other bands following their trail. Theirs is the sound of the Boston underground scene of the late eighties fused with sun-kissed Californian melodies and it's really rather special. The first couple of songs are impeded by a volume level that never shifts off the double red on the noise meter all night, but even then their ability to craft a fine tune still shines through. Alannah's vocals move effortlessly from the soft and seductive to something that makes it clear she's not to be messed with. A song where she tells an admirer in no certain terms she's got his number is a particular stand out in a set that starts off on a high and stays at that level throughout - impressive for a band with just one single to their name, the set-closing That Letter.

Everyone who I see in the next hour or so asks me why Desperate Journalist aren't bigger than they are. This year's Maximum Sorrow is their fourth album / EP and shows no sign of their creative urges diluting. Powered by the rhythm session of Simon on bass and Caz on drums with Jo dead centre with Rob and Charley's guitars cranked up to threaten everyone's eardrums, each song feels like an epic heartfelt cathartic drama, no more so than Satellite from their previous album In Search Of The Miraculous, Poison Pen and their final song Everything You Wanted from Maximum Sorrow, their strongest and most consistent record yet. 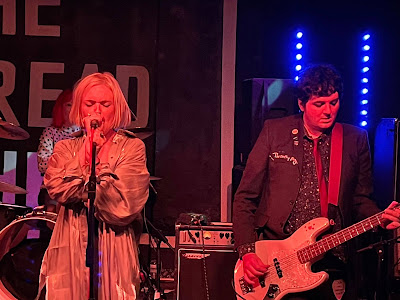 Visually, it's hard to be drawn away from Jo, who is living out every word of these songs in front of us. The very best music is that where you feel you're being pulled into the world of its creators and watching Desperate Journalist live is one of those moments where you're experiencing why music is so special. We're dead on our feet from the previous night, yet the intensity of this performance brings us back to life for forty five minutes in the way nothing else does. We still haven't worked out the answer to that question.

This is LIINES' big night and you sense they know it and they grasp the mettle firmly from the off and don't let go. I'm Not Afraid, a ninety-second, one-line repetition that builds and builds is simple in construction, uncomplicated in its execution, yet is so thrilling, visceral and exciting even though you know exactly what is coming next. It sets the bar high and it's one that doesn't lower through a seventeen-song fifty-five minute set that's comfortably the longest we've ever seen them play. It means that we're treated to pretty much the whole of their second album, chunks of it still unrecorded, two brand new songs making their second ever appearance as well as the roll call of old favourites from their debut Stop/Start like Cold, Blackout, Find Something, Disappear and their calling card Never There.

New bassist Anna doesn't feel like a new member. Like when Tamsin replaced Steph the transition feels seamless, like a new beginning and that's she's always been there, without ever diminishing the legacy of the person who's left. She adds her own subtle parts to the songs and visually does her own thing whilst fitting into LIINES' feel, groove and vibe like a glove. LIINES are a band that have always felt like a collective, a sum greater than their parts and the 2021 version is no exception. 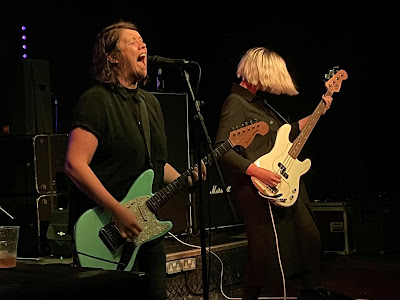 The (brand) new songs hint both at a continuation of what they've done and a stretching of their boundaries. One of the new songs, These Days, feels like the best thing they've ever done on first listen, and this is remember a band that wrote Never There, full of the tight rhythmic drum patterns that are way more complex than they first appear because of the way Leila delivers them, a riff that burrows its way into your brain and a vocal that gets more frantic, urging and desperate as it progresses before stopping dead. The second Always The Same is more experimental, less consistent in structure, but no less demanding of attention.

Whether it's the excitement of playing again after so long or whatever but it feels like LIINES have spent the last eighteen months in a secret cave somewhere away preparing for this moment (the truth is they've had a few rehearsals). The old songs sound more powerful than they've ever been whilst the new ones leave us, and everyone else, salivating over the prospect of a second album. They're tighter without losing the raw primitive energy, the riffs have a harder edge, the drums sent the heart racing a little quicker than ever and even Zoe's between song chat, whilst still wonderfully beautiful and awe-struck that there's people here to see them, is no longer awkward but still every bit as heartfelt.  When she tells us at the end of the final Keep On Going to do exactly that, you just want to jump the barrier and hug her, and we're certain we're not the only ones.

The night is an absolute triumph. LIINES might not be the most successful of the bands we've championed on Even The Stars since we started yet they're the ones we're most proud of. They're still every bit that wonderful band that John Hall and I stumbled across nearly seven years ago in an empty room but they've moved on, developed, grown and spread their wings and tonight there's three hundred or so people unconditionally in love with them and that makes me as happy as pretty much anything these days.

LIINES played Not Afraid, Find Something, Another Start, Disappear, These Days, Go, On And On, Look For You, Always The Same, Cold, Blackout, Never Wanted This, Wait, Shallow, Sorry, Never There and Keep On Going.