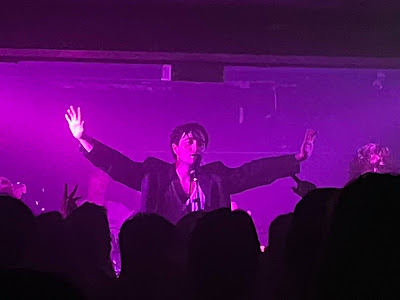 A Monday night in Manchester is often a sedate affair, but heading down to the basement of Yes for the Liverpool double-header of Stone and Courting there's no chance of a quiet night watching bands as the audience throw themselves around the room to two bands that trade on their ferocious live shows.

Stone are first up and with Elliot's leg in a brace and Fin's ankle having locked up, they're operating at half-pelt, but you wouldn't know it from watching them (check out their BBC Introducing video from Reading). They've got a real energy to their performance, an intensity that comes with sincerity rather than just being for effect. The diatribe against modern living that kicks off Fuse is fueled by a real anger at injustice and recent single Dance To The Real Thing rails against the disposable nature of popular modern music that says nothing to them, demanding "stick this one in your playlist". 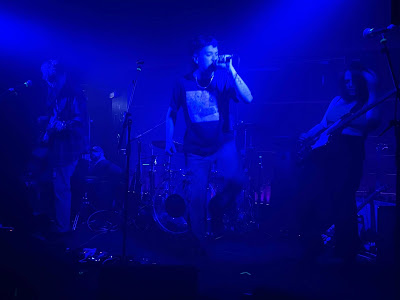 They've been together three years as a band now and it shows in their performance; they're tight and together, but without losing the passion and spontaneity even with the physical restrictions that their injuries have placed on them. Sarah and Alex's tight rhythm section and her and Elliot's backing vocals add force where it's needed. Leave It Out and a new song Bankrobber are the highlights, half-spoken, half-sung lightly-accented songs that tell a story whilst getting the audience moving.

Courting kick off with the short-sharp shock of Football, recently used in Liverpool's third kit launch. They start at a million miles an hour following it with Crass, Tennis, Grand National and Popshop!, dispensing of three-quarters of the Grand National EP in the first fifteen minutes, leaving themselves and the audience almost breathless - the mosh pit covers most of the front area of the limited space in the basement pushing the rest of us towards the edges. It's not until they start the audience in a singalong of the theme tune from Friends that everyone gets time to pause and recompose themselves.

As the set progresses they reveal themselves to be a lot more than hit and run merchants though. Slow Burner is just that, starting slow, Sean taking on the cowbell, a much underused instrument by frontmen, and joins the moshpit, demanding a circle around him as the others take the song on a journey that grows wings and picks up speed as it progresses. Kuon Kuon Kuon is frenetic and is teeming with ideas that both complement and contradict each other as it progresses and they finish the main set with last year's single David Byrne's Badass. 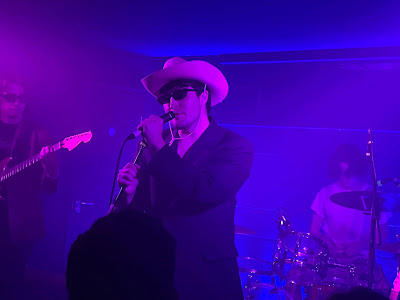 The encore is made up as they go along. Football is given a second airing and with the crowd warmed up now is crazier than its first play. They have a brief discussion and decide that forty-five minutes doesn't give us value for money so they repeat Crass and then leave us with another short-sharp burst of Football, almost drowned out by the chanting from the crowd. We leave hoping that they're not going to be defined, or allow themselves to be defined, by that one song because there's more at play here and with a debut album referenced as they introduce Loaded, it's hoped they can capture this phenomenal live energy on that as they did on the Grand National EP and evolve still further.