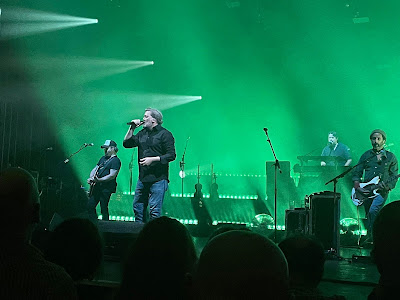 Elbow opened the first of their trio of intimate (by their standards) hometown shows with a triumphant set of tracks taken from their mid- and late-period albums with a sneak preview of their forthcoming album Flying Dream 1. Arms were raised, songs bellowed back at the band at the top of the crowd's voice in an evening that was all about celebration and coming together unified by the music. Support came from a piano interlude from Peter Alexander Jobson and Jesca Hoop. 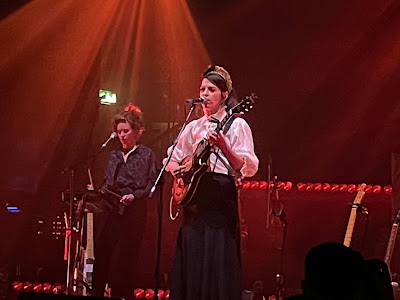 It's thirteen years since Jesca Hoop came to Manchester from California and was adopted by both Elbow and the city of Manchester she tells us half way through her set of six songs, half of which, including the title track, are taken from her 2017 album Memories Are Now and a further two from her last album 2019's Stonechild before finishing on The House That Jack Built's Born To. Moving from a two-piece to a four-piece with electric drums, violin and guitar alternating in to accompany her, she plays a set that's well-received by the Elbow faithful, many of whom will be familiar with her from previous tours. Her voice takes centre stage and its haunting qualities are the perfect foil for the instrumentation that's subtle and understated. 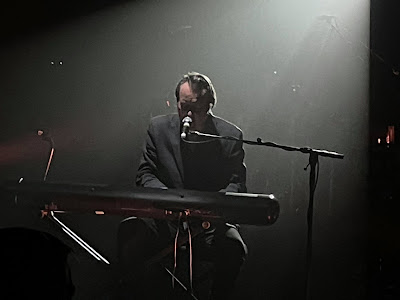 Peter Alexander Jobson, introduced by Guy Garvey as "the Geordie Neil Diamond, the Bironic Man and Clint Northeastwood" plays a five-song set described as a piano interlude ahead of the headline act. He describes his set as trying to recreate the atmosphere of a smoky Berlin piano bar with him playing in the corner as he plays songs from his Piano Tuner EP including opener Just Cause I'm Dead, the short sharp sex-obsessed Holiday and the stand-out track Please Please Please plus a couple from his solo album slated for early 2022 release. With his world-weary lived-in twang and just the one instrument, as he claims to be too lazy to have got a band together although it's five years since he last played with I Am Kloot, he succeeds in both charming us with his stories and with these rough regret-tinged songs.
It's Elbow's night though as some of the city's favourite sons belatedly finish off the promotional campaign for their 2020 album Giants Of All Sizes on home soil. The roar of appreciation as the lights dim and they make their way on to stage is replicated at the end of each and every song. 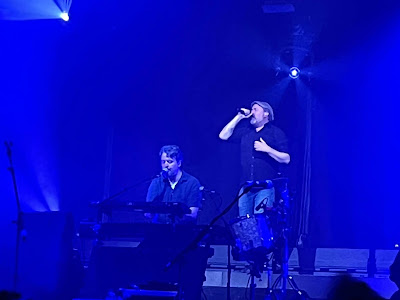 The tracks from that album - opener Dexter And Sinister with Jesca Hoop on backing vocals and White Noise White Heat in particular - pack a real punch live, with Alex Reeves' drumming a particular feature, harder than perhaps Elbow have done for quite some time whilst its lead single Empires sees Garvey head for the raised area at the back of the modestly laid out stage to survey the packed Apollo floor in front of him.
As with most recent Elbow setlists there's not much on offer for the early fan, only a glorious Station Approach, celebrating that wonderful feeling you get as a Mancunian exiting Piccadilly Station after time away strolling down to our city centre, coming from any of the first three albums. The Seldom Seen Kid, still the benchmark against which everything else they've done has, rightly or wrongly, been measured still contributes most to the set, numerically, thirteen years on. However, with songs like Mirrorball, Bones Of You, The Loneliness Of A Tower Crane Driver and the main set and encore-closing Grounds For Divorce and One Day Like This and Elbow's predilection for giving the crowd what they know and love, that's as understandable as it is predictable. After eighteen months starved of live music, even the woman screaming for Mexican Standoff, is placated by a few words from Guy.
The real moments of beauty in the set lie in the less expected places though. My Sad Captains is a glorious eulogy to those departed and an advice to live your life for the moment with Fiona Brice and Gita Langley's violins piercing the air. Magnificent (She Says), dedicated to the Elbow Juniors who are up on the balcony and are roll-called by Guy careful not to miss any of them, is both poignant and celebratory whilst its Little Fictions' companion Kindling is an emotional journey from the end of one relationship to the start of another. 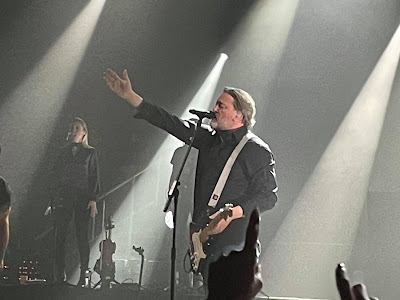 There's a tantalising glimpse of the new with What Am I Without You, the closing track on the forthcoming Flying Dream 1. It's keyboard-heavy sound would suggest a change of direction ahead, but Guy tells us the song stands out as the rest of the new record is about bruised, bewildered, wistful romanticism. We would have loved to hear more, but tonight was probably the wrong time and place to introduce it.
As the night closes with the band dropping out and the audience singing the unmistakable chorus of One Day Like This, loud, then quiet, then hummed and then the loudest though, three and a half thousand of us are joined as one as Guy and the rest of the band survey us with open-mouthed admiration and joy.
Guy states early in the evening that this is about coming back from "that thing" and people are here for release in whatever way they feel comfortable whether that be following his lead and raising our hands or enjoying the music in the way we see fit rather than feeling like we have to fit with the masses. His exultations to join in feel more coaxing than forcing as they had at some more recent shows we'd seen them play - and that allows us to experience the real magic of an Elbow show again, a sense of togetherness and shedding off the bad stuff in your own way yet with a sense of community where no one is an outsider.
Elbow played Dexter And Sinister, Fly Boy Blue / Lunette, Mirrorball, Empires, Station Approach, The Loneliness Of  A Tower Crane Driver, What Am I Without You, White Noise White Heat, Magnificent (She Says), Kindling, Weightless, The Birds, My Sad Captains, The Bones Of You, Grounds For Divorce, Lippy Kids and One Day Like This.
Elbow's official website can be found here. They are also on Facebook and Twitter. The tour concludes with two further nights at Manchester Apollo (September 29/30)
Peter Alexander Jobson's website can be found here and he is also on Facebook and Twitter.
Jesca Hoop's official website can be found here and she is also on Facebook  and Twitter.
________________________________
Follow Even The Stars on Twitter at @eventhestarsuk and like our Facebook page for all the latest updates
Posted by Even The Stars at 00:44