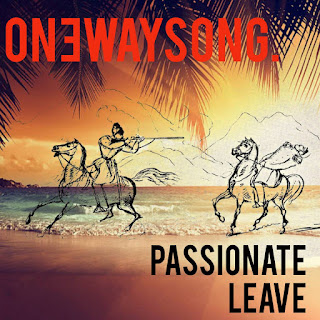 One-Way Song release their Passionate Leave EP on November 27th. Ahead of that, they shared with us the story of the five songs that will make up the release, accompanying YouTube videos for some of the tracks and an exclusive demo of Dr Spraza Lies

This was an impromptu track, we wrote it just before one of our live concerts as we felt we needed
a dedicated show opener. We stuck with it to begin the EP, too. On the one hand it’s about people
cowering before the news all the time, when outside life is still going on. On the other… well, a
book called Convergence of Catastrophes, by Guillaume Faye, explains a lot!

People ask what the word ‘Phaeton’ means in this - Archduke Franz Ferdinand was shot in one,
there’s a Buick Phaeton in Casablanca… I always associate it with old Gangster cars though, and
that’s how it is meant here. This track was probably the main one that led us to form One-Way
Song as a full project separate to the theatre; here’s a demo of how this track began when we were
just writing it for a future theatre show:

The lyric to this was written in Marseille around the time of the nearby Germanwings Flight 9525
disaster, again for the theatre group before One-Way Song even existed. The crash was caused
deliberately by the co-pilot, Andreas Lubitz, who was this 27-year-old kid with depression. Our first
ever gig as One-Way Song was the day after the Nice terror attack, so we were in two minds
whether to play this or not. It isn’t meant to be about that, but the glove does actually fit in a way:

A quick disclaimer here that this isn’t autobiographical (apart from one line) though it appears so to
people who know members of the group because we’ve operated in both Warrington and Alderley
Edge which are very different places. It’s actually about Billy Liar, but if his imagined town
‘Ambrosia’ was actually a place just down the road, which is possible in Manchester with the
difference between North and South.

Post-Sex In The Mafia

This is actually the leftovers of a track from a previous project Angus ran in Wilmslow. We had
loads of other One-Way Song tracks to record that people might have heard live from this period
such as Eat Or Learn, Northern Spring Dimes or Sex In The Mafia. But the record has a lot going
on and is very busy, so this seemed a bit simpler to finish things off with. We took Sex In The Mafia
and just made it Post-Sex In The Mafia which fits the lyric.