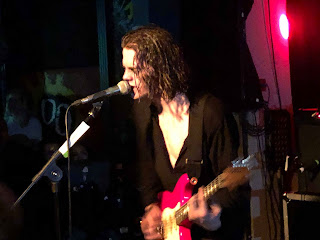 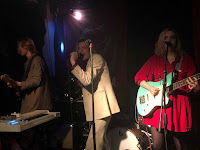 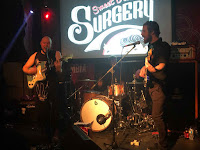 The Blinders’ tour rolled into Preston on Thursday night with White Room and Sweet Deals In Surgery in tow. In possibly the most intimate venue they’ll play in for a long time, they took us on a journey through the dark demonic landscape of Columbia.

Sweet Deals On Surgery open up proceedings, and the three-piece, who headline their own self-titled EP launch in this venue on the 17th, rattle through what seems like about twenty songs in their half-hour set, only occasionally pausing for air. Their twin-vocal approach works really well, breathless, urgent, one second acting out a call and response, the next combining to jack hammer home their message. Subtlety isn’t their strength, but the aim of their impressively energetic set is a little more brutal than that and they get a great response from the growing crowd. 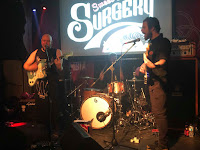 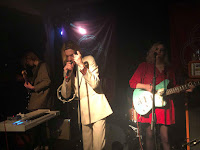 White Room’s approach is a very different one. Their songs possess a battered and bruised romanticism with a streak of optimism coursing through the middle of (most of) them. In Jake, they’ve got a front man with the poise and posture to charm huge crowds, as they’re intoxicated by the grooves and melodies his band mates are creating. They’re at their best in the moments where his and Josie’s vocals combine and lift the songs and demand you connect with them, whether it be on the likes of the excellent new song Money Tree or the dark and creepy Cannibal Song from their Eight EP.

The place is rammed by the time The Blinders make it to the stage, soundtracked by Patrick T Davies’ poem inspired by the album’s title and subject. It’s an interesting crowd mix, those that know every word of every song like a doctrine for life interspersed with the curious. Mosh pits start, fade and then kick in again throughout, people are hoisted on shoulders in scenes reminiscent of the much bigger venues to which The Blinders are heading.

It’s not hard to see why people connect with them. It’s over a year since we last caught them and that connection and bond that they create with the audience has become stronger and deeper in that time. Right from the scurrying urgent opening moments of Gotta Get Through and the follow-up barrage of L’Etat C’Est Moi and Brave New World, they never let go of the vice-like grip their intensity allows them to take of the audience’s attention, even if as Thomas later jokes they lose themselves in a trance for half an hour of the set. In fact, dispensing of their three best known songs straight away sets the uncompromising tone of the night.  There’s moments where songs could be lifted away from them on a sea of clapping hands and singalongs, in particular Hate Song, but they keep the anthemic undercurrents of the songs on a tight rein. 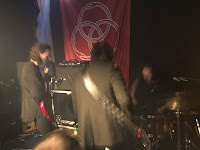 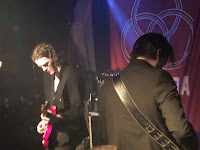 The songs that have been in the set a while - ICB Blues, Ramona Flowers and Swine - slip in effortlessly alongside Columbia’s newer songs and show how The Blinders have evolved their sound over the past two years of incessant touring. Despite being two weeks into a gruelling schedule, they treat the forty-five minutes they’re on stage as if it’s their last, Charlie skilfully managing to avoid cracking skulls as he wields the head of his bass over the front rows of the crowd, Thomas, face paint melting in the furnace like heat, delivering words of anger and frustration with the same rasping passion that went into the creation of these songs. Matt provides the backbone, the rock out of which these expressions are carved and with additional percussion of a fourth member hidden next to the bass amp, the songs sound even more potent and demand attention and action than ever before.

Et Tu and Brutus provide the thrilling conclusion to the main part of the set. The short sharp shock therapy of the former leading the way into The Blinders unfurling their creative minds in front of us in an eight-minute song full of the sorts of twists and turns that established bands take on in their “experimental phase” and provides the most fascinating insight into their art. Thomas ends up on the bar, Charlie on one of the monitors as they drag us kicking and screaming with them on the song’s tempestuous journey. As the feedback dies down, Charlie and Matt depart, and Thomas picks himself up off the floor, he serenades us out of the door with Columbia’s parting shot, the raw, stripped-down Orbit (Salmon of Alaska).

There’s plenty been written about The Blinders in the past few months, about them saving the world from bland directionless bands that all sound the same and have nothing to say. You sense with their unassuming nature that they’d settle at present for saving us and themselves. Where they go from here is going to fascinating to watch.