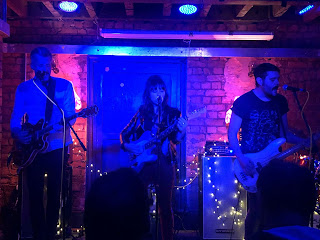 For someone who's spent the summer supporting The Killers in stadiums, the Eagle Inn in Salford is an intimate venue to witness Juanita Stein bring her second album Until The Lights Fade to a rapt audience.

Since Howling Bells went on hiatus, Juanita Stein has been prolific, releasing Under The Lights Fade just a year after her solo debut America. Tonight's set is split down the middle with tracks from both, although the continuity that runs through the two records, the innate quality and heartwarming classic feel of the songwriting means that the demarcation lines are not noticeable. The songs have a harder edge to them live, accentuated by the brick walls of the reclaimed terrace house that makes up the Eagle's music room.

What stands out in Juanita's live set is the warmth in her voice, whether it be on the country-tinged Florence, the harmonic and brooding Cool or the harder-edged Get Back To The City, where she rants at the arseholes that her friends are attracted to. There's a chemistry between her and her band too, one that allows the richness in the music to wrap itself round her voice and accentuate that warmth. It's something the audience, silent whilst they're playing, loud in their acclaim at the end of each song, show their appreciation of.

She's engaging too, laughing that she's messing with us when a song stops dead then starts back in and trying to impress us with a Mancunian accent that sounds more Glaswegian before admitting it's that bad. The intimacy of the venue doesn't faze her or her band either, they play with the intensity you'd expect of an act on much bigger stages. To finish she strips things right back, accompanied by just Paul from her band, for a cover of Nancy Sinatra's Bang Bang that feels like just the perfect way to round off the evening.

Having produced one of the best and underappreciated albums of the year for two years running, Juanita Stein ultimately deserves a bigger stage than this, but for now audiences lucky enough to witness her in such surroundings should feel blessed that these songs are being performed where you can see the whites in Juanita's eyes and hear the expression in every note.