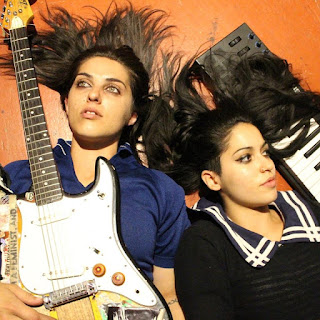 Lust is the second single from Australian sister duo The Bambi Kills. The follow-up to their debut Headlights is a full-on affair with by a dark menacing self-produced video that's a perfect visual accompaniment to the track.

The Bambi Kills are Vanessa and Elly Velinsky and have previously been in other bands in Melbourne before coming together to record, Vanessa best known as lead singer of Valentine and Elly as part of another duo Mannequin Death Squad. Their debut single Headlights was released earlier this year and the premiere of this song on Pilerats suggests that they are in the process of recording their debut album.

The single, as well as its predecessor Highlights, is available on their Bandcamp.

Email ThisBlogThis!Share to TwitterShare to FacebookShare to Pinterest
Labels: The Bambi Kills