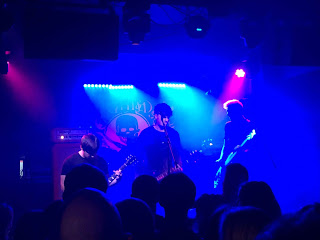 Matter Of Mind’s first nationwide tour headed home on Friday night with a packed show for This Feeling at the Night And Day in Manchester. A seven-song set including new single Just A Stranger went down a storm in a hot and sweaty room.

Opening with A State Of Mind from their debut EP, Matter Of Mind start as they mean to go on. The song is almost unrecognisable from its recorded version from their debut EP that’s now a couple of years old. It’s big, bold and made for rooms bigger than this, as is the rest of their set. A more recent single Stay follows and has the front rows singing along to every word, completely hooked into them. The two guitar and bass assault from Jordan, Rob and Ash and Connor’s rhythmic powerful drumming is augmented now by judicious use of backing tracks that elevate the older songs in the set a level higher.

Just A Stranger, the new single and perfect set-closer if ever we heard one, follows and takes the foot off the accelerator pedal a little and opens us up to a more reflective yet no less powerful version of Matter Of Mind. It’s ambitious in scale, even more so live than on record, but hits the mark. You do sense though that they’re at their happiest when they’re letting loose in unison, when a song stops and then crashes back in, and Blind Side provides them with plenty of opportunities to do just that. One of their earliest demos on their Soundcloud, it’s testament to just how far they’ve come in a relatively short space of time. 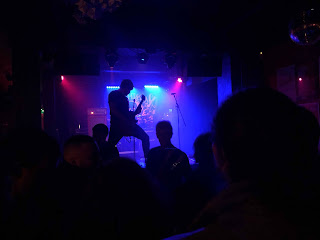 Coffee Stains And Migraines astonished us when we first heard it when they played acoustic at a Terry Christian night with John Bramwell a few years back and it steadfastly refuses to allow itself to be budged from the set. It felt like a breakthrough track back then and still might be in future. Sparks In The Blood is the only unreleased song in the set but screams future single at us. It’s probably the hardest of the songs in the set, allowing them to let loose again. They finish with Sanity and Jordan and Rob end up amongst us and Ash straddling the monitors as the song hits the breakdown and all hell breaks loose.

With a group of fans excited to talk to their heroes at the end of the set, you sense that things are slowly starting to happen for Matter Of Mind. Of all the young bands on the Manchester scene at the moment, you sense that they’re the ones that could make a massive breakthrough given the management and backing that any band needs these days irrespective of raw talent in this world of who-you-know or paid-for Spotify play listings, support slots and exposure for bands in the same stable and such like. They have the songs (including Far Too Wrong which somehow can’t find its way into the set), they have the look and, most importantly, their sound, although not groundbreaking, has all the anthemic qualities to fill big halls, but do it with a much harder edge than their contemporaries.

Matter Of Mind played A State Of Mind, Stay, Just A Stranger, Blind Side, Coffee Stains And Migraines, Sparks In The Blood and Sanity.

Matter Of Mind's tour calls in at London The Monarch (8) and Sheffield The Rocking Chair (17).