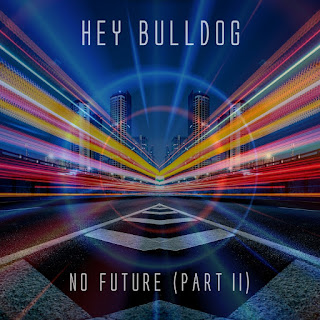 No Future (Part II) is the new single from Manchester's Hey Bulldog. Clocking in at close to seven and a half minutes, it's the band's most ambitious release yet, a song that's become a live favourite for the way they stretch the boundaries of their sound and seek to take themselves and their audience down new paths and succeed

No Future (Part II) sees them visiting new territory not witnessed on their previous single and Rob's voice sounding very different to it has done in the past. With instrumental sections taking the listener on a trip and breaking the rules of a radio single, it's a powerful statement that Hey Bulldog believe in what they're creating and that lovers of music will listen and not switch off after three minutes because their attention span is shot as many bands fear in their quest to deliver identikit songs that sound similar and get the same accolade hurled at them. Hey Bulldog aren't afraid to experiment with what they do and challenge people's expectations of them and No Future (Part II) does exactly that.