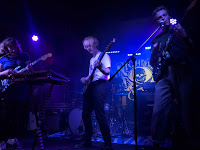 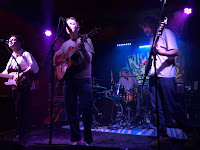 However cold it is outside, a sold out gig at the Night And Day in Manchester is always an intense sweltering affair and Pip Blom's triumphant return to a city that has taken the Dutch teenager to their heart was no exception. Before her twelve song set had the crowd bouncing, Chappaqua Wrestling impressed us on the first time we've seen them play.

Never judge a book by its cover is an old adage. We're sure there's a story behind Chappaqua Wrestling's name but it put us off investigating them with visions of some art-school flowery-shirted weak strain of what purports to be music. This couldn't be further from the truth though - of all the bands we've witnessed this year for the first time, they're probably the one that have impressed us the most, one to get excited about, to look for their next show and shuffle the diary around to catch it.

They're direct, powerful but with moments where the vulnerability of the songs shine through and the fusion of Charlie and Jake's vocals, sometimes on their own, sometimes in tandem gives the songs an uplifting vibrancy that also makes them stand out from the crowd. Songs aren't just crafted around one hook repeated throughout, they have an intuitive knack of crafting a song that takes the listener on a journey. A new one called Blue Moon is a case in point, starting with two minutes of guitars building into the main section of the song, where you can watch the intensity at close quarters of how they translate the art of playing the instrument into something that locks in an audience's attention. 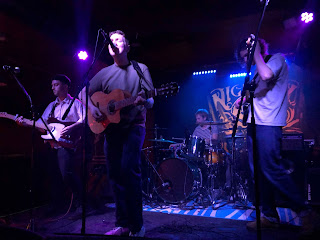 Other stand out tracks are False / Blue and Wait To Form My Head from their debut EP1 and recent single Plant Trees, but there isn't a weak track amongst the seven they play. The audience move closer as the set progresses and the reaction to them grows exponentially with each song too and by the end both young and old heads in the venue are nodding in appreciation at a band that stands out from the crowd for their music rather than their image, an increasing scarcity these days.

It's a tough act for Pip Blom to follow. We haven't seen her play for nearly twelve months and in that time she's become the darling of 6 Music and released her debut EP Paycheck to universal acclaim. Live, she and her band have upped their game significantly, whilst back then they were driven along by the sheer energy of the band, they're now a forcefulness and powerful purpose to them, everything fleshed out for the bigger stages that they're sure to grace in 2019.

It's swelteringly hot inside the Night And Day. A few songs in and Tender has removed his shirt, a few songs later Casper does the same. It's so hot that you can feel the sweat running down your neck, but you don't care because the music makes you feel alive. It's worse on stage of course, Pip jokes that they should work out more, a bare-chested Tender says he does already and they laugh. That connectivity between them is clear, both in between songs but the way in which they create so much energy in these twelve songs that's so infectious that it's impossible not to be drawn in and fall in love with them. 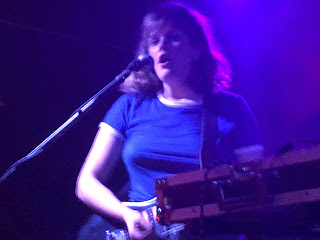 The singles that have become 6 Music staples are all present and correct - Hours, Babies Are A Lie, Come Home, School, Pussycat and I Think I'm In Love - and get the best response from the audience, singing along at one point threatening to drown Pip out or arms raised in unison with Gini's drum beats. The rest of the set doesn't shirk in comparison though, old favourite Demo 2 is bolder and packs an even heavier punch these days whilst Daddy sees Pip and Tender sharing lead vocal responsibility across the verses to powerful effect. The songs hurtle along at breakneck speed for most of the time, challenging us to keep up with them, but without ever following the same route. The energy that propels them is one that the audience latch on to automatically as if they're powerless to resist the snappy addictive hooklines that each of these songs seems to possess.

By the end everyone's exhausted by the heat, but exhilarated by the ride we've been taken on for forty-five minutes. Their songs are all about substance over style and it's not difficult to tell why there's such an age range in here given that Pip Blom's music has such a timeless quality to it. Pip Blom's influences may lie back in time but they've got an energy that music requires much more of in the here and now.