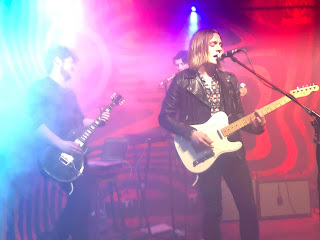 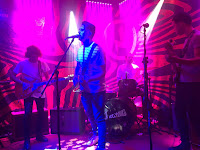 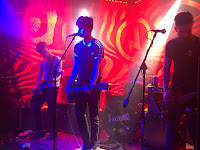 Rory Wynne headlined the fourth Head In The Clouds event on Thursday night supported by Puppet Theory and Provocateurs. Three very different sets got a warm reception from the Jimmy's crowd.

First up are The Provocateurs, cheered on by a rowdy set of fans who turn up half way through their second song. They’re one of the unpolished gems on the Manchester scene currently, songs full of the vigour and pent-up excitement of youth. Singles Fall For You and Adore show their ability to craft a hook that grabs you, whilst 90s Girl is the best of the lot and a sign that there’s much more to come from them. They use Marco and James’ backing vocals to layer harmonies on Duffy’s tales of growing up in Stockport and lift these songs up and out there. They have all sorts of disasters with guitar strings breaking but take it in their stride and show they can interact with their audience.

Next up are Puppet Theory, a more polished four piece that have sculptured their songs and honed their performance for bigger rooms than this. The likes of Katie, Spark In Me and Drifting aim to tug at the heartstrings with big bold verses that break into choruses that aim high. They wear their influences on their sleeves yet Chris’s impassioned vocals and the catchy nature of some of their hooks mean that they still have enough personality of their own in the performance and the songs to deliver a set that gets a strong reception from the growing crowd that gets louder after each song.

Rory Wynne is a puzzle. He has some influential supporters, his debut LP came out via Blossoms’ Very Clever Records, but by not playing the game of social media, glossy videos, lewd shirts and PR that makes shit smell like roses, he’s very much an outsider. But then so were so many truly great artists either through shyness or principle.

He starts with Star In The Sky from his debut EP and it's delivered with an effortless swagger that some might perceive as arrogance, as if that's ever been a bad thing in rock and roll. Like each of the three minute gems he delivers tonight it has you singing the chorus by the time it comes around the second time. Six of the eight tracks from the hush-released album follow as well as recent single D'ya Wanna Do It Again? as he crams as much as he can into a half-hour slot. Each one has a personality of its own, the sleazy sound of Picture This contrasting with the clap-along effervescent chorus of Let's Have A Party. Rory asks us to clap along to the intro, although it's hard to tell whether he wants us to do it or is doing it for his own amusement.

He swigs from a bottle of red wine between songs, chatting with an air of self-deprecation into the intros of the likes of White Lines and the final song What You Said To Me. These are the type of songs that should have thousands bouncing around big dancefloors the way some of his contemporaries have achieved - and tonight it feels like the songs have been beefed up in preparation for that. But you sense Rory is in here for the long haul with a belief that his undeniable special talent will somehow shine through without the need for the circus.