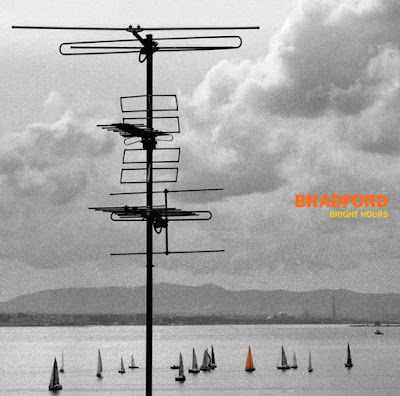 There's two kinds of reformation - the big cash-in on the legacy and nostalgia culture that seems to be polluting the pool for new artists being able to make their mark and those that aim to conclude unfinished business that come about as a result of old friends getting back together to rekindle the magic of their formative days and the excitement of being in a band. The latter tend to be more rewarding and Bradford's thirty-one years later follow up to their Shouting Quietly debut sits alongside Thousand Yard Stare's Panglossian Momentum as a shining example of a record that's been made for the sake of making it.

There's a relaxed streak running right through Bright Hours, it feels like a continuation of the sentiment of Shouting Quietly but with the passing of time making it feel warmer and wiser. It's a record to lie back and let wrap itself around you, immersing yourself in the classic songwriting that runs through it, the absolute lack of pretense or misguided experimentation and its certainty in its own shape and form.

The album deals in real life experiences and stories. Opening track Like Water has a man who's "walking through life in a permanent high wind" and a woman whose cigarette seems to be "sucking the colour from her when she's not looking" - a clever observation on how people are affected by what is happening around them using analogies anyone can listen to and recognise. It's an assured confident start from a band that understands what it's trying to do and how to deliver with. With Stephen Street on board the rough edges are smoothed out in most places and the edginess is replaced by a confident assured focus and target that they consistently hit across the eleven tracks. Down-Faced Doll might come from Ian observing a doll in a ditch, but the parallels could be drawn to some of the experiences that humans face in their lives

The Weightiness Of The Pointlessness must be an early contender for the best track title of the year and starts to see Bradford spreading their wings musically. Lyrically it muses on the times we live in - the anger of the social media bubbles, the "corruption and depravity" that seems to be rampant and the song's title points at the sense of helplessness to change it. "My wet face, sometimes I cry, there's no disgrace, it's only life" is another opening line that captures a sentiment that sits somewhere in the back of the mind waiting to be revealed and articulated with a simplicity that people can relate to. Set to a simple yet uplifting tune with the voice sat dead centre, it screams out that it knows what you're going through because it's been there too and that it'll be OK but don't accept second-best or being put down.

Whilst there's no failed experimentation on this album, it doesn't mean that Bradford don't let their influences and their record collections ripple through Bright Hours. There's a gorgeous groove underpinning the chorus of Present Day Array, shimmering, shiny and not something you'd expect from a band of this vintage and it's accentuated by gorgeous soulful vocals that you wouldn't expect from a group once labelled as Morrissey's favourite.

This Week Has Made Me Weak takes a reflective look back, day by day, at the mundanity of the routine of daily life and how it drags you down (using the song's title) - something that feels like it's impacting all of us right now but which they manage to capture the essence of and distill it into a four minute song.

The album's title track opens up side two of the vinyl and it feels like a very apt choice for the title. It's a song that, like much of the record, is able to feel quite simple and accessible on first listen yet reveals many more layers of details on each subsequent listen - both in the music and the way they bring harmonies and voices together. Lyrically, it contains our favourite line, comparing music to our existence itself - "Life is not a download, it's a beautiful gift we've been given" - and the Bright Hours is the power of that realisation.

The Rowing Boat Song sees the album take a darker diversion, a sense of mystery and suspense created by the repetitive drum pattern that runs through it, never at the forefront but always there, creating a sense of unease that's countered by everything around it.

Feathers In The Fire takes things down a level, a reflective look at loss and the speed at which "life is hurtling by" and the pressure that puts on the mind as you lose people around you and they disappear in the fire of the crematorium. It's probably closer in musical outlook to their earliest work than much of what's gone before yet still fits in with the rest of the album.

Also reflective, yet with a personal intimacy that often only comes from the experience of life, is the penultimate track Gave A Time. The song came from a poem written by their late manager that the band set to music, but which leaves Ian centre stage and allows him to instill the emotional significance of both the words and the track's origins into the vocals.

It's carried into the final track I Make A Fist which makes numerous references to thirty years ago as it looks backwards and inwards but with vision unclear because of the "fog" that comes with trying to remember the past. Like the album, the song feels like it's a release from that and moving into the here and now.

The end of the album is the only time the brow is furrowed as it finishes on a one minute snippet of Like Water recorded live at an acoustic night in Todmorden. It's there for a reason no doubt but not one that's immediately obvious without knowing why it is.

Bright Hours is a real triumph, a record that I had never felt I needed to hear until I did. There's a reassuring familiarity to it due to the high level of songwriting craft that's gone in to each and every song - something younger bands focusing on trying to write a hit single rather than a coherent and balanced set of songs would do well to observe. The timeless nature of their work and unfailing quality control makes it a welcome addition to a small canon of songs from a band that has never quite had the recognition they deserve.

Email ThisBlogThis!Share to TwitterShare to FacebookShare to Pinterest
Labels: Bradford