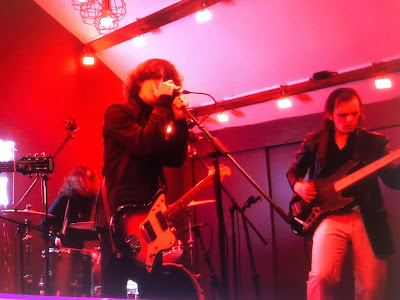 Live music. Remember that? The thrill and excitement and adrenaline as the drums kick in, guitars roar and the bassline rumbles seductively and then the vocals come in, delivering words of wisdom, experience, loss, love or any combination of them?  Close to a year after the gig scene came to a grinding halt and on the day we finally (hopefully) got a date for it to start again, The Blinders reminded us what we've been missing with a scintillating live show mixing tracks from last year's Fantasies Of A Stay At Home Psychopath and their debut Columbia on a Twitch live stream from Scruff Of The Neck's Manchester offices.

For us, live streams don't really capture the energy of a live set unless you're up close and personal with the camera in the band's faces, able to watch every expression, every subtle knowing glance between the band and see the passion in their eyes. Scruff Of The Neck seem to have understood this and converted their top floor office space in Manchester's Northern Quarter into a sweaty gig venue (minus the piss-stained carpets, awkwardly placed pillows, the tuneless crowd singer who doesn't know the words and the six foot eight guy that plonks himself and his BO right in front of you).

The Blinders have always been in their element live, right from their early days when they were playing to a handful of people to their huge Ritz show that signed off the Columbia era. There's an energy in their live performances that's almost impossible to replicate in a studio and capture - yet the pent-up frustration of not being able to play for a year (other than a few stripped-down beer garden shows at their local Rose And Monkey just round the corner from Scruff's offices) means that they're on a mission to expel all that built up tension and aggression. 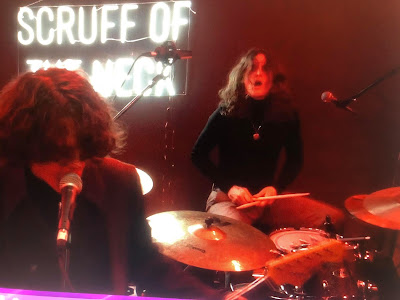 They've changed too. Drummer Matty left around the time of the album release and rather than just slot a replacement drummer in who on their own could never replace the magic that the three of them together generated, they've taken the widened ambition of the Fantasies album and brought that to their live line-up, adding not just Castrey on drums, but drafting in Eoghan from Cabbage on guitar to bolster that side of their sound and Johnny on keyboards to allow more subtlety on tracks like Circle Song and From Nothing To Abundance. That's especially evident on the set-closer Black Glass which is taken on a journey way outside of the confines of the recorded version - they've clearly spent lockdown thinking long and hard about what direction the band wants to take as the world frees up and they can take Fantasies and the "forty-plus" new songs Tom talks about in the interview prior to the show out to their public for the very first time.

The intensity and ferocity of the performance is evident right from the start of Fantasies' first two tracks - Something Wicked This Way Comes and Forty Days And Forty Nights. Guitars and bass come in and threaten to lift the ceiling off the intimate space and the close-ups of Tom as he delivers the lyrics like the most important thing he's ever imparted makes you feel like you're as near to be at a gig as you've been for twelve months especially when you switch off the irritating chat that seems to accompany these live stream events. The venom on Forty Days and Forty Nights is direct, focused and as pointed as the sharpest blade. Lunatic With A Loaded Gun later in the set is even more vicious in its delivery.

The older tracks have a new vitality that the expansion of the band from a three to a five piece gives them the opportunity to breathe into them. In their most natural of habitats, you can see them grow in front of you, the tension lift from their shoulders as they immerse themselves in their most enjoyable and natural of activities.

A three minute break while Thomas resolves guitar issues allows them to pause for breath with an instrumental interlude before "try this one on for size" introduces a wild Mule Track that really shows just how far the breadth of ambition in their songwriting grew from Columbia to Fantasies whilst Black Glass takes the biggest marker it can find and underlines that fact with Eoghan and Johnny coming to the fore and showing that they're not there to make up numbers but to be a fundamental part of the next phase of The Blinders. June 21st you say....

The Blinders are still scheduled to play the following shows - although they are obviously going to be moved to the summer or autumn very shortly - London Electric Ballroom (March 4), Leicester O2 Academy 2 (5), Southampton Joiners (6), Cardiff The Globe (7), Reading Sub 89 (8), Hull The Welly (10), Edinburgh Caves (11), Preston The Ferret (12) and Manchester Albert Hall (13).

Scruff Of The Neck broadcast live shows from their Manchester office on their Twitch channel.