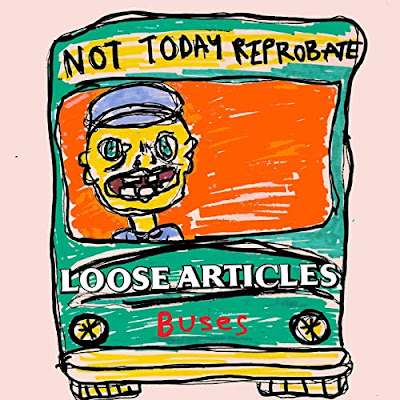 After Loose Articles announced themselves with their Orchid Lounge EP in 2019 things went a bit quiet from them, but now their new tracks are coming along like buses. Except they don't like Buses as they tell us in their latest two-minute onslaught accompanied with an equally chaotic video.

"Get on ya bike love, I hate buses" Natalie snarls at the end of Buses as her, Tre, Erin and Lou take on their hated mode of transport in a venomous attack on the mundanity of travelling into Manchester city centre on a daily basis. Although the video will attest to the fact that it's never dull with the four of them about as they shower anyone in range in Stella, take Amos the dog on their travels, dance on the Hulme bridge made famous by Joy Division and leave you feeling dizzy as the camera shakes wildly as the song reaches its climax.