TRACK OF THE DAY : Keeley - The Glitter And The Glue 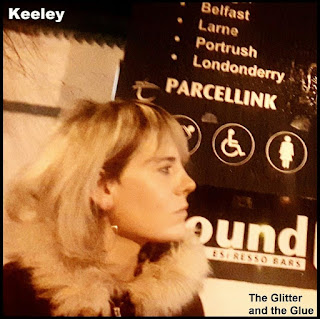 Keeley return with their second single - the double A-side The Glitter And The Glue and You Never Made It That Far - an impressive follow-up to last year's stand-out debut single Last Words. In just two minutes and thirty seconds The Glitter And The Glue is a thrilling headrush of a song, whilst its partner-in-crime You Never Made It That Far shows a more experimental electronic side to a band whose intrigue grows the more you discover about them.

Keeley are a four-piece from Dublin fronted by Keeley Moss. Their debut single Last Words made an immediate impact on release last October, making a mark on significant national and international playlists and The Glitter And The Glue is the next track to be taken from their forthcoming debut album.

For the past five years she's been publishing a blog entitled Keeley's Chronicles based upon the unexplained and unsolved murder of German tourist Inga Maria Hauser in Northern Ireland in 1988. The band's songs contain lyrics that focus on her story and the mystery around her death. Unlike many concept-based records though, the songs do stand strong on their own two feet without any knowledge of the subject - but knowing where they come from draws you into the story.

Email ThisBlogThis!Share to TwitterShare to FacebookShare to Pinterest
Labels: Keeley