TRACK OF THE DAY : The Slow Readers Club - Everything I Own 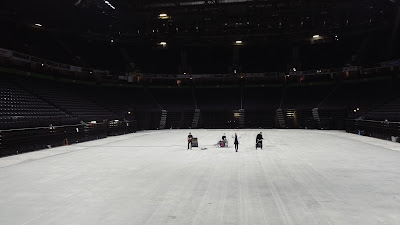 The Slow Readers Club have revealed a new video for their track Everything I Own, taken from their recent album 91 Days In Isolation, written remotely during the first lockdown last year. Filmed in the imposing location of an empty Manchester Arena, the video both complements the song perfectly and gives us a reminder of exactly what we are missing out on.

Aaron talks about the lyrical content of the song - "Lyrically the song is about a failed relationship - 'a monument to cowardice, a decade lost a fatal kiss' - but works for any situation where you have given significant time to something that hasn’t worked out. It could be interpreted as an allegory for what’s happening to us as musicians and the music industry as a whole. Which is why the vast empty arena works so well."

Jim explains why they chose to do the video in the arena and what it was like being in such an iconic space but without thousands of fans to give it atmosphere - "We did an acoustic video there earlier in the lockdown as part of the celebrations for the arena’s birthday. The guys who helped set it up really liked what we did and offered us the chance to use the arena again at some point in the future if we wanted to."

"It’s been a dream of ours to play our own show at the arena (ideally full) and we just thought fuck it, let’s do a video there. We started talking about what we could do and it just made sense to play the song as if it were a gig, highlighting how empty the venue is. Live music has taken a huge hit from Covid and using the arena to emphasise that just made sense to us"

"We filmed it in mid December and it was absolutely freezing in there. They told us they hadn’t had the heating on since March in order to keep costs down. Apart from the cold it was a privilege to play in there empty. It felt special because it’s rare that place is so empty, but at the same it was really heartbreaking because it should be full in there and absolutely bouncing. Hopefully it will be back to its best soon"

The video was filmed by Croftwerk, who have produced all The Slow Readers Club videos to date and Chris from there told us - "It was the most spectacular way we could think of to visually illustrate what’s going on at the moment for artists and venues

I’d seen loads of back stage theatre dressing room photography and tried to set the shots with Aaron up that way. To communicate something about performance in general being shut down, not just in music. For the shots on the arena floor we made the best choice possible on a limited budget, changing between solo spotlight and 'house lights' on to follow the dynamics of the track to the best effect. Probably the most minimal lighting ever used in an arena but it does the job!"