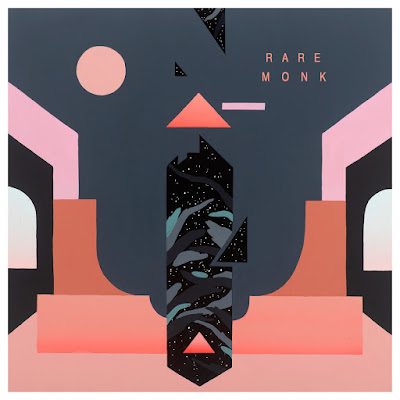 Sometimes the only PR that can sell you an album is the music itself. We were listening to something sent to us in one of the hundred or so emails we get every day when, away from the computer, You Tube threw a song we'd never heard before by a band we'd never heard of at us. And then when you delve more you find and album and a back catalogue.

The song was Space Song, the band was Rare Monk. It made us stop immediately and try and find out more - and discover this album, their second, a beautifully crafted yet understated record that washes around you, lifts you out of the fog of the strange times we are living through for the thirty-two minutes of the nine songs and reminds you of the magic of musical discovery.

It's Space Song that opens the record, standing out by dint of Dorian Aites longing vocals that impart the sense of helpless despair at the end of a relationship that one side didn't want to end - the key line "I'll never be over you" sung with a resignation that doubles as a comfort for those in that position that it's not a unique situation. Hugh Jepson's guitar solo that comes in half way through the song both captures that sensation without going overboard, drawing you and immersing you under the song's extended outro of the repeat of that key line.

What's striking throughout is the emotional intelligence poured into these tracks - lyrics that catch you on the third or fourth or tenth listen - and Never Really Over is an album that you can listen to over and over again and pick up something new each time. There's Kafka references in Furnace Glow, a measured yet damning condemnation of the way data is being used to justify any argument on Statistic Vandals, the emotional turmoil of becoming free of long-standing protection on Goodbye - each one building a picture of an element of the things that affect each and everyone of us in some way or another. It's not a COVID album though, much, if not all it appears, of this album, was written before things changed for the worse. But it's a reminder also that things were far from perfect in those times that we wish were still upon us.

That Never Really Over still leaves you with a warm glow is testament to the songwriting skills of the band. Rare Monk display an exquisite control over the mood of the nine songs, both with their instruments and the most delicious and considered use of vocal harmonies to give lift and emphasis at just the right time in just the right measure. Whilst never one-paced, the album never moves into higher gears, but it doesn't need to, in fact it's all the better for it, because the magic is in the detail. It's in moments where the guitars in Cuneiform act like a conductor for the vocals, the roles are reversed on the ascending chorus on Silverlake or the underpinning rumble that runs through the final track Arrows until the minor explosion of the last ninety seconds.

Never Really Over is a record that leaves you feeling that you can make sense of things if you strip away the noise and that music doesn't have to blow you away to be powerful. Sometimes subtlety and a less is more approach can say, do and achieve much more than the longest solo or the most controversial line. Never Really Over might have been a chance discovery, but sometimes they are the best.