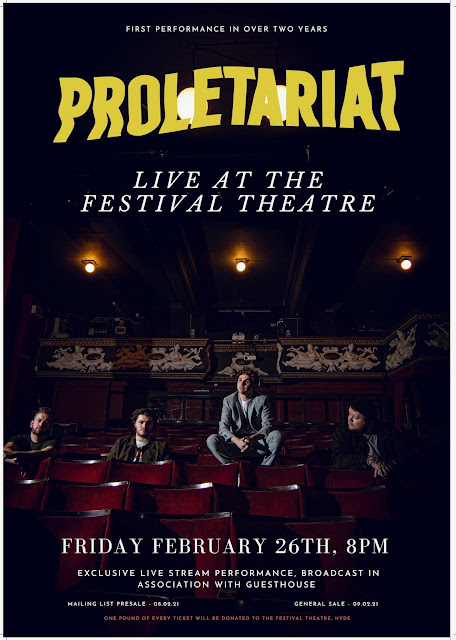 Proletariat's comeback last year came as a bit of a surprise after they bowed out after a series of sold-out Manchester shows you could count on both hands a couple of years ago, burning out before it seemed they'd achieved much of what was expected of them. Having released a trio of singles since they announced they return and unable to return to the gig circuit because of the restrictions, they set up a live stream show from Hyde's Festival Theatre on Friday night.

There's very much a sense of unfinished business around Proletariat right now. With Evan and Rob joining to accompany front man James and lead guitarist Connor, there's a new-found focus and energy that's evident from the start of this live set and their single Go Ahead that re-announced them back at the end of the last year. Add to that the strutting slightly cocky confidence the band have always possessed and it's very clear that they're on a mission.

Tonight is part of that reannouncement process. They mix some of their older songs - Nervous Energy, Mr Brown, Kiss Of Death and Always The Same with the newer including their set-closer, brand new single You're Free (To Be As We Are). that dances on a line of showing its influences but being very much of its own creators, landing on the right side of the line where lesser bands fall down the abyss on the other side. It's Not Alright, which sees James ditch his guitar, very much shows that Proletariat have a wider vision for what the band is about and it's an enticing look into where there might be taking us.

They're still playing their cards close to their chests though. Rather than overwhelm with a set of songs that no one knows (yet), they keep some of their powder dry with a short and sweet set. There's a couple of covers that will no doubt disappear from their set as they reveal their blueprint further. Kings Of Leon's Don't Matter isn't a particularly great track in our opinion yet they breathe life into it, whilst their cover of The Rolling Stones' Sympathy For The Devil very much gets their own stamp all over it, particularly in Connor's guitar work and James' vocal delivery.

Proletariat are very much one of those bands that thrive off the buzz of the room, everyone's adrenaline fueling the next persons and it becoming cyclical. Live From Festival Theatre did the weird trick of reminding us of what we're missing on many levels - the music itself but also the connection between like-minded individuals on and off the stage to create an experience. You sense they'd both rather be in the room with the rest of us, four sheets to the wind, hot and sweaty, but cognisant of the fact this is the best we have at this moment and it's still a buzz. For now, Proletariat are back and look certain to be one of the must-have tickets when live music kicks back off again.