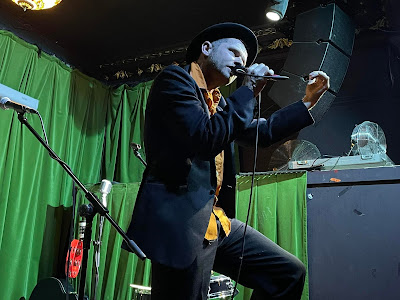 David Ford and Annie Dressner performed the second of two shows in Manchester on Tuesday night at a sold-out show at Gullivers, across the road from the previous night's more intimate set at The Castle. With both artists only performing one song on both nights and with David bringing along his full kit and looping set-up, it was a very different but not less enthralling evening of entertainment.
Annie Dressner opens up the evening with a six-song set, five of which are different to the set she played last night, the only duplication being when she invites David onto stage to play piano for her on
Strangers Who Knew Each Other's Names. She starts with a new song Dance We Do from an album she's in the process of writing and once again takes us on a journey across her previous three - Nyack and Losing You from her most recent Corner At The Coffee Bar, Heartbreaker from Broken Into Pieces and the aforementioned Strangers and Brooklyn from her debut. 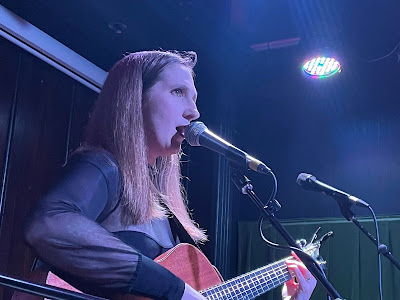 This set of songs, like the night before, feel relatable, the memory of a childhood haunt (Nyack), youthful nights out and the morning after (Brooklyn) and there's a richness and depth to her voice that's genuine and affecting and brings the songs to life as stories rather than just songs on their own. Her chat with the audience creates an immediate rapport too and she's given the same respectful attention as the headliner as should, but often doesn't, happen. With her performance later on with David a real highlight of the main set as well, she's certainly going to win over a whole new bunch of friends and fans as David says she will in his introduction at the start of her set.
The stage set-up indicates that we're going to be in for a very different night of entertainment than the previous one with an array of bongos, drums, microphones and a music box accompanying the piano and guitars. Whilst looping now is a very common in live performances, David was doing this ahead of his time, his earliest solo shows in 2004 in little bars and basements around London leaving people stunned by the sheer audacity and uniqueness of those performances. Within a year KT Tunstall was doing it on Later With Jools and headline news for it and the likes of Ed Sheeran have forged huge careers on it. David Ford's response to this has been his shrug of the shoulders at fame and fortune and exploring the art further, emphasized by the fact that at one point in the evening there's about twenty different sounds going through the loop pedals as songs are constructed around them, building in intensity and power. You Never Had It So Good, from his new album May You Live In Interesting Times, Go To Hell and The Ballad Of Miss Lily are the three songs, alongside the set-closing State Of The Union, where this approach leaves the audience particularly awestruck by the sheer audacity and nerve to pull this off. 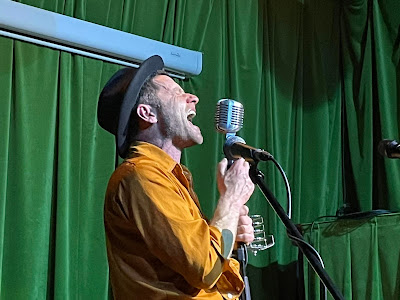 Ford's art though isn't just about looping. There's moment of genuine fragility and tenderness, the wracked emotion that still comes through on a guitar-only I Don't Care What You Call Me, played to absolute silence from an attentive crowd, is as genuine and affecting now as it was when first revealed on his debut I Sincerely Apologise For Any Trouble I've Caused, whilst 2 Shots might infuriate any anti-vaxxers in the crowd, although if it does they hold their silence, as the piano track celebrates the Astra Zeneca jab giving him the ability to come back out on the road and do what he loves after missing it for so long. His song O'Sullivan's Jukebox, another song delivered solely at the piano, looks back at all his life choices and comes to the conclusion that for all the things he could have done, the path he's chosen is the one that's made him happy and without regrets. 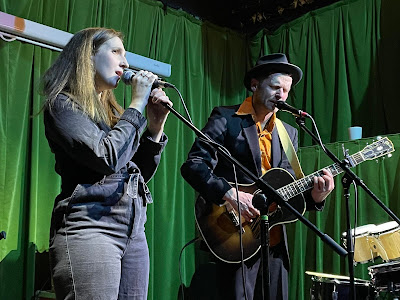 It allows him to take on projects like the one with Annie where they recorded a six-song mini-album in the period between their two shows in January and this tour and have it on sale at the merch desk, which is an innovative web-led or honesty box contactless process that's perfect for small venues such as these. Annie joins him for four songs mid-set, two of which are taken from the aforementioned 48 Hours - Warning Sign and Some Folks Are Just Lucky I Guess - alongside One Of These Days, a song David has often duetted with female supports and audience members, and Just Like You, one of the real standout tracks from May You Live In Interesting Times. David laments he didn't know Annie when he recorded it as he would have done it as a duet such is the strong artistic connection the two of them have made. Their vocals do come together and complement each other perfectly, and when Annie leaves the stage David comments that he wants to go home now as that section is the highlight of the night for him. 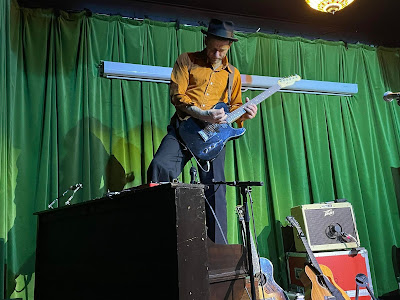 There's an amusing but almost disastrous moment as he starts his final song State Of The Union, which he tells us has done plenty of heavy lifting for him since its black and white home video provided the introduction for many to his solo work way back in the depths of 2004. A pint of Guinness that an audience member had brought him having noted he was trying to drink from an empty glass is placed too close to a guitar stand and in the midst of trying to pick up another instrument to layer more on top of the building song, it takes a tumble all over the carpet on stage, stopping him in his tracks. If anything, it fires him up more though, finishing the song with an almost indecipherable combination of guitars, piano, bongos, drums, echoing vocals and electronic pads which somehow make perfect sense. Almost twenty years since its first revelation, it still has layers to reveal and new territory to discover. And that's why David Ford is one of our most underappreciated musical treasures.
David Ford played May You Live In Interesting Times, You Never Had It So Good, Waiting For The Storm, O'Sullivan's Jukebox, The Wall Has Come Between Us, Go To Hell, One Of These Days, Warning Sign, Just Like You, Some Folks Are Just Lucky I Guess, The Ballad Of Miss Lily, I Don't Care What You Call Me, 2 Shots and State Of The Union.
David Ford’s website can be found here.  He is also on Twitter and Facebook.
Annie Dressner's website can be found here. She is also on Twitter and Facebook.  She also has a Patreon.
Their tour continues at Runcorn The Brindley (March 9), Pocklington Arts Centre (10), Durham Old Cinema Launderette (11 and 12), Leicester The Musician (13), Brighton Hope And Ruin (16), Abbotsbury Church (18), Truro The Old Bakery Studios (19), London The Fiddler (23 and 24) and Winchester The Railway Inn (26).
________________________________
Follow Even The Stars on Twitter at @eventhestarsuk and like our Facebook page for all the latest updates
Posted by Even The Stars at 16:50