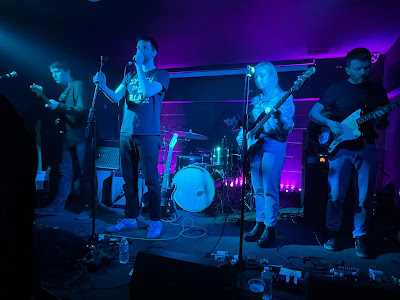 Silverbacks opened their short tour of England and Ireland in support of their recently-released second album Archive Material with a Sunday night show in the basement of Yes in Manchester to an enthusiastic crowd supported by Pale Blue Eyes who gave a performance worthy of headliners themselves.
It's Pale Blue Eyes' first time in Manchester, Silverbacks' label mates on Full Time Hobby are opening for the whole of the tour. Their set is a thirty-five minute journey of real understated beauty starting with their debut single Motionless and finishing with its follow-up Dr Pong, a song about playing table tennis in Berlin. There's a really strong intuitive relationship between Matt on vocals, Aubrey on bass and Lucy on drums and this set of songs have a real ebb and flow to them, an energy that seems omnipotent and omnipresent throughout, seductive rather than explosive, but whatever it is they have, it draws in and wins over the audience from the start. 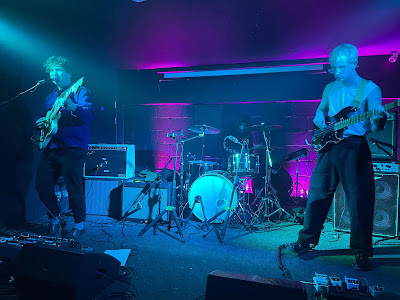 Songs like Horses, Globe and Daisy suggest that they've got a substantial body of work ready to unleash on us. The set flows beautifully, all peak and no trough, the only disappointment is that they have to cut Chelsea, one of only four songs they've released to date, from their set when their stage time got put back half an hour from the advertised one on a two band bill.
Pale Blue Eyes played Motionless, Horses, Globe, Exits, TV Flicker, Daisy and Dr Pong.
Silverbacks may have been stood at the side of the critical acclaim that seems to be hurled at anything that has a D postcode across the Irish Sea, but over the course of the past two years they've quietly released two excellent albums - 2020's debut Fad and this year's Archive Material, of which tonight's show at Yes is the first of a week-long run that's been supported by Culture Ireland. The set draws heavily, as you'd expect from Archive Material, but favourites like Dunkirk and the set-closing Just In The Band still remain from their debut. 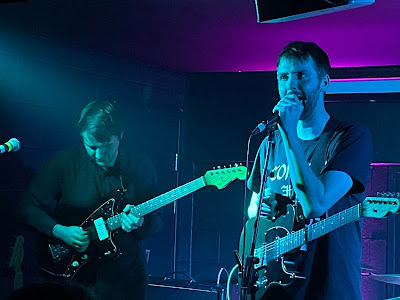 They are very much a different beast to their contemporaries. Much of their sound is driven by the taut tight guitar duo of Kilian and Peadar, who move from operating in tandem as one to almost working in opposition and combined with the rhythm section of Emma on bass and Gary on drums, the Silverbacks sound takes its cues from influences as much from across the Atlantic as it does from closer to home although there's moments where Emma and Daniel's vocals combine on the likes of Muted Gold that they remind us of the criminally underappreciated Delgados whose early work betrayed many of the same influences. 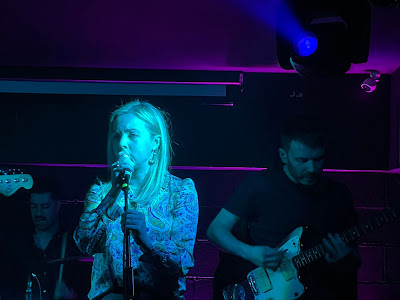 Daniel is a front man of some presence, physically imposing because of his height, but his vocals are powerful, one minute direct and targeted, the next almost insouciant and languid and that combination and contrast add to the thrilling creations of his band mates. Emma takes over lead vocals on Wear My Medals and Up The Nurses mid-set and Kilian on Recycle Culture and this adds an extra dimension to a really thrilling and exciting set that never drops in quality or intensity throughout its fifty minute course. Like all the best gigs they leave us wanting more as they depart without an encore.
Silverbacks played They Were Never Our People, Rolodex City, Archive Material, A Job Worth Something, Dunkirk, Muted Gold, Wear My Medals, Up The Nurses, Sirens, Recycle Culture, Central Tones, Different Kind Of Holiday and Just In The Band.
Silverbacks are on Facebook and Twitter.