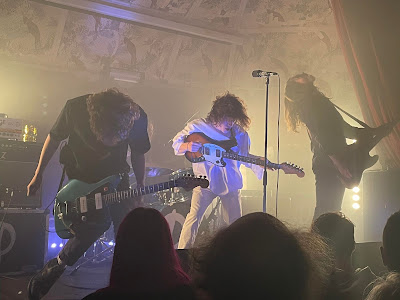 October Drift headed to Manchester for the latest show on their rearranged UK tour on Tuesday night accompanied by a depleted in numbers China Bears and new kids on the block BÖHMEN for a high quality evening of three bands at different stages in their evolution as bands but who each win over the packed out crowd.

BÖHMEN are first up and the unfeasibly young four-piece have brought quite a crowd with them and one that gets involved as their set progresses. It must be rare to see a circle pit open for the first band of three in a venue of this size, but BÖHMEN get that as well as an arms in the air, phone lights on for their most recent single Tenfold. For such a young band, there's an impressive confidence to them, they have a lot of big moves on stage that you can see translating to bigger stages and bigger audiences than this and they're technically very accomplished and unlike many bands of their make-up they're not tied to trying to be a younger version of their heroes and falling short in the process (the Catfish And The Bottlemen reference in their bio does them no favours). 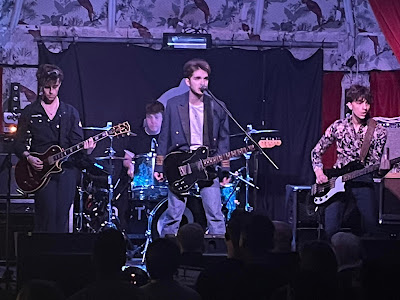 They very much aim to give a visual spectacle as well as an aural one, but on the latter they also succeed, possessing all the raw ingredients you need - a front man who can actually sing, a drummer who holds everything together and drives the whole thing along, a guitarist with an ability to deliver killer solos and hooks with his own personality on them rather than someone else's and a bass player who quietly does his thing and is as essential if not as prominent. It wouldn't surprise us to see them move quickly through the smaller venues here, particularly given the following they already appear to have picked up, and stand out enough to make a significant breakthrough.

We're a bit confused as to why there's only three of China Bears on stage and as to why we're being treated to a stripped down set that focuses completely on released material, but Ivan explains to us that COVID caught up with them after their recent trip to SXSW and they'd missed a few tour dates already but wanted to come out and play and had rearranged these songs to suit the depleted line up. 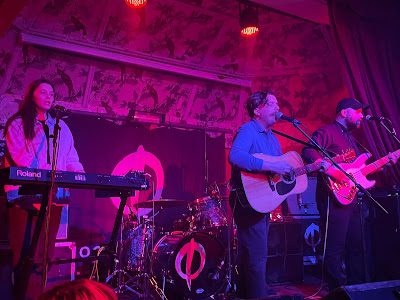 Initially they struggle to win over a noisy crowd for the first couple of songs, but it's credit to them that, despite the unfamiliar set-up, that's exactly what they do. The pared back nature of the set really allows the three-piece's delicious vocal harmonies and the melodies of the songs to come to the fore. With no drums to power the set along they have to resort to more subtle techniques yet on songs like Statue Still and Night Calls, they are no less successful. It's a tough place to play between two bands with such forceful and energetic live shows, but by the end the applause shows that they've made a triumph out of a potentially difficult situation.

Right from the start, as the last bars of Underworld's Born Slippy are replaced by the sound of guitars turned up to the max on a short instrumental intro into Losing My Touch, there's an almost overwhelming energy on (and off at times) the stage from all four members of October Drift. Fifty minutes later there's the one respite at the end of the evening as Kiran delivers Like The Snow We Fall out in the middle of the crowd, drowned out at times by the massed voices of a full Deaf Institute crowd.

In between they deliver a set of their trademark anthems, both old and four songs from their forthcoming second album I Don't Belong Anywhere, that has a mosh pit that grows wider and deeper as the eleven song main set progresses. The new songs, which include already released singles Airborne Panic Attack and Insects, don't divert too far from the tried and tested October Drift formula, but more than enough to make their mark in their own right, particularly Bleed which sees Kiran precariously stand on the thin ledge between the floor and the raised seating area at the side of the stage. 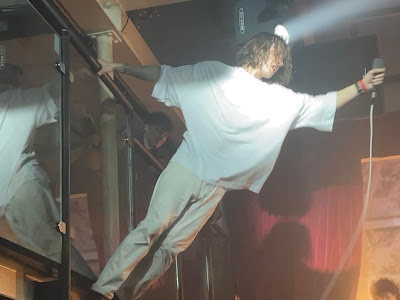 As ever, the visual side to October Drift makes it difficult to take your eyes off them, the four of them throw everything into the set from start to finish, a seemingly boundless energy that makes the mosh pit in front of them seem relatively tame in comparison. Alex and Daniel who flank Kiran throw themselves around the stage with such abandon, it's a wonder they can actually play their guitars, let alone songs with such propulsive and unstoppable power whilst Chris's drums are the engine room at the back that really glues the whole thing together whilst pouring fuel onto the fire. Set to persistent strobe lights and Kiran running along the bar and stage-diving a couple of times, it feels like a full-on arena performance crammed into a small room.

Ultimately that's where October Drift are right now. Their sound and ambition are bigger than this room. They know how to deliver a compelling and entertaining live performance that will win an audience round if it's needed which it isn't tonight. The crowd that have packed out the venue, including BÖHMEN's fan base who join in the madness at the front, adore them unreservedly though. Their challenge, and the million dollar question, is how do they take the next step up and the ones after that - they possess the means based on tonight but need to find the way to navigate the industry to get there.

October Drift played Losing My Touch, Cherry Red, Just Got Caught, Don't Give Me Hope, Oh The Silence, Lost Without You, Bleed, Insects, Airborne Panic Attack, Come And Find Me, Forever Whatever and Like The Snow We Fall.