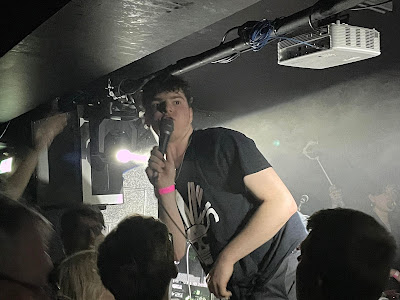 Ahead of their US trip for SXSW Working Men's Club returned to their roots with a hot and sweaty warm-up show in the basement of Yes in Manchester revealing a new line-up and new material.
With Working Men's Club having sold out The Ritz as recently as November, this really is a treat for the Working Men's Club faithful with tickets for this intimate show selling out in seconds as you'd expect for one of the North's most-talked about new bands. There's a fair mix of people in here too from youngsters enthralled by the energy generated by their fusion of dance and rock music and the older among us who see a modern incarnation of something that thrilled us so much in our younger days. 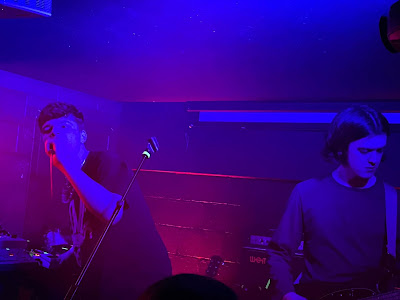 The set is, as you'd expect, still heavily based around their critically acclaimed debut - the likes of Cook A Coffee, AAAA, John Cooper Clarke and the final duo of Angel and Teeth still have a fresh energy about them live despite being the backbone of the set for a couple of years now. Into it is mixed four new songs - 19, Widow, Money Is Mine and Tomorrow - that demonstrate a progression in their sound rather than a revolution. Visually, much is focused around Syd who immerses himself in the music, almost oblivious to his bandmates around him, who in return seem uninterested in the unscripted movements of their front man, on stage, hanging on to the rig attached to the ceiling at the front of the stage or in amongst the crowd trying to get the crowd moving a little more than they ultimately do. The new keyboard player, who also adds backing vocals, isn't introduced, as Syd says little other than to ask the sound and lighting team to make adjustments, but she represents a further evolution in their sound, adding backing vocals to many of the tracks. 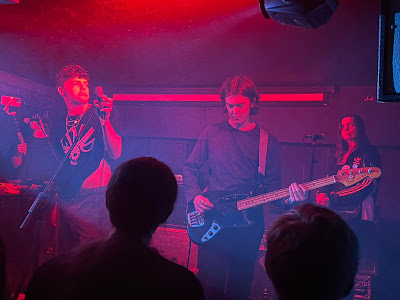 Surprisingly given the intimacy of the venue there's a lack of energy from the audience compared to the Ritz show and this seems to grind a little with Syd who attempts to rabble rouse on a couple of occasions, but we're so tightly packed in, it's difficult to move anywhere and the fast sell-out of the show means the make up of the crowd is more geared towards those who can work the ticket buying frenzy than necessarily the moshpit. In addition, to Working Men Club's credit, it feels like they've now outgrown spaces like this, their sonic ambition is bolder and targeted at bigger spaces than this. However, this show is a timely reminder of the power they create, their refusal to conform to the expected standards of a bright young band making their way and very much creating something born from their influences but combined to thrilling effect into something that's very much their own.
Working Men's Club played Be My Guest, 19, Valleys, Cook A Coffee, Widow, AAAA, John Cooper Clarke, Money Is Mine, Tomorrow, Ploys, Angel and Teeth.