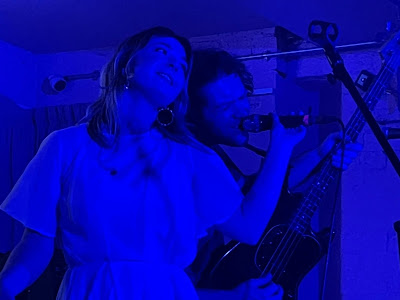 With their fourth album Present Tense being released on Friday, New Zealand four-piece Yumi Zouma brought the album and its predecessor Truth Or Consequences to Manchester for the first time and turned the night into a communal celebration of a band that's sailed under most radars for far too long. Support came from Manchester's own Freak Slug.

Freak Slug has been making what she describes as "lo-fi bedroom pop" for seven or so years now, but recently has been picking up some decent support slots around town and winning a new set of admirers with her intense sets accompanied by a guitarist and minimalist backing tracks that allow her voice to take centre stage. She's got an impressive set of songs behind her - recent single Out Of The Blue and Radio and Care from her Videos EP are highlights, she puts her own spin on Joy Division's Disorder and there's a couple of new ones called Sorry Not Sorry and Killer that feel biting and vitriolic and really hit hard. The crowd give her a rowdy response, one woman tells anyone who'll listen how great she is, and whilst it's irritating that she does throughout the last half of the set, it's hard to disagree with her point. 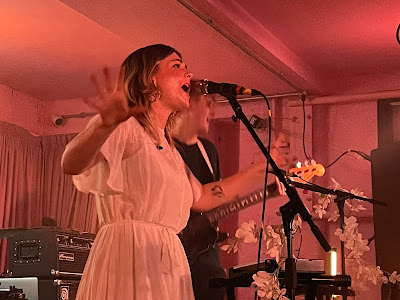 Yumi Zouma's set takes a few songs to get going, but once it does it becomes a joyous celebration. Whether it's the sound, which improves noticeably after about four songs, or the response to an audience member screaming out "show them some respect, they've come from New Zealand" to silence the chatterers, something happens and the room becomes one joyous outpouring of love and the band respond to it. As the majestic Right Track / Wrong Man kicks in, the room have come together

Christie comes alive, her face of concentration early on becomes one beaming smile, taken aback by the response, whether it be the roar of approval at the end of each song, the wonderful couple who inch their way forward and finish off the night at the front dancing like it's their first wedding dance or the guy who spends half his time with his back to them, hugging his mates but singing along to every word. It's a hard audience to pigeonhole, but what Yumi Zouma have done, four albums in thousands of miles from home, is create a following that adores them, that sings along the melodies and hook lines to the songs louder than they're being played and it feels very special. 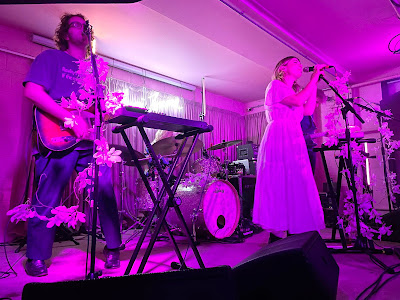 They've got two albums to play us - the gloriously uplifting dream pop of Present Tense is only a couple of days out in the world, whilst its predecessor Truth Or Consequences emerged just as the world was shutting down around it two years ago. The live sound is a little harder than the recorded, Josh and Charlie exchanging guitar and bass throughout and Josh making the very rock and roll move of jumping into the crowd at one point, but rather than the chaos that usually ensues in such situations, it's a much warmer and friendlier atmosphere, much in keeping with the spirit of the music the four of them create. They delve a little further back into their impressive catalogue with three tracks of their 2018 EP3 and a couple from Willowbank before they encore with 2019's standalone single Bruise and a glorious audience participation single of their very early single The Brae to finish off the night.

As the buzz of the gig takes quite some time to subside, we reflect that Yumi Zouma feel like a really well-kept secret, loved and adored by those that know, their albums acting as a warm comfort blanket, rich in the emotions that connect people through music without wallowing in self-pity. There's a real joy in the room tonight as they play that transmits itself from the stage to the crowd and is then amplified back. The band seem genuinely delighted and taken aback by the response they get - particularly when the crowd sing back the hook line to Astral Projection that was only released earlier this week - but it's very much deserved and a sign of their modesty and how genuine they are.

Yumi Zouma played Southwark, Crush, Truer Than Ever, Powder Blue, Where The Light Used To Lay, Cool For A Second, Right Track / Wrong Man, In Camera, Depths Pt 1, Give It Hell, Eyes Of Our Love, December, Mona Lisa, Astral Projection, Bruise and The Brae.