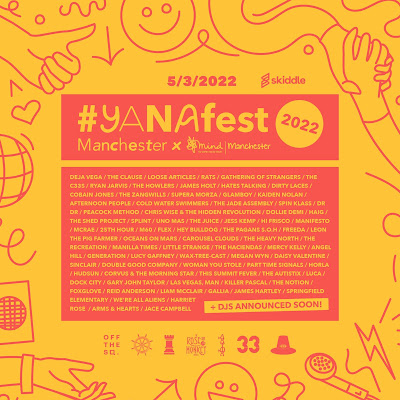 After many postponements Manchester's You Are Not Alone Festival finally took place on Saturday around eight venues in the Northern Quarter with a full line-up of artists from the local scene and further afield, often playing in venues much smaller than you'd traditionally find them. We got out our Clashfinder and spent eleven hours in the company of ten acts, some familiar and some new to us, on one of the best-run urban festivals we've ever attended. 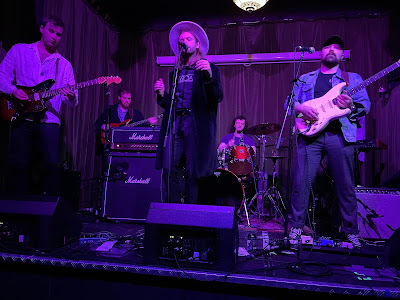 Freeda open up our day and the stage in the ballroom in Gullivers. With their first nationwide tour just announced, they're a band full of confidence and it shows in an impressive opening set that covers most of their released singles to date as well as first exposure of some new songs that don't even have fixed names yet, but which already possess their trademark build into soaring choruses that the likes of Replay, Plead and their final track Young possess. They go down well with a bunch of early starters. 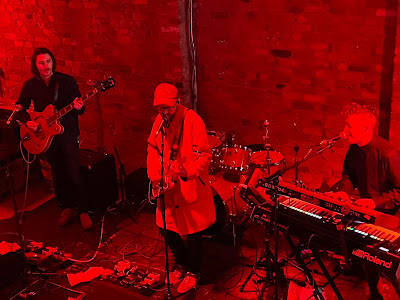 We nip across to Off The Square for Spin Klass, who turn out to be our old friend Chris from The Minx's new band that formed during lockdown. Doing things back to front they released an album Sod It before playing gigs and their set is mostly taken from that. His unique front man style is adapted for a more synth than guitar based sound than his previous works but his personality still shines through as the trio run through the likes of Cancelled, Fists With Your Toes and Rich, Old And Sober from the record as well as a few new songs. 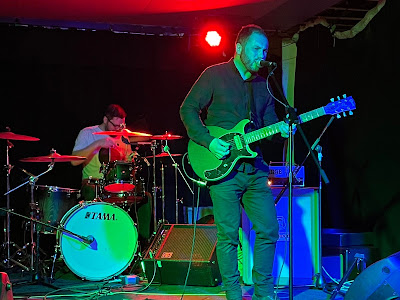 Aatma is next and the sticky floors and rundown feel are perfect for the Shropshire duo This Summit Fever's dark, dirty, grungey guitars and drums sound. Not being local they don't have a friends and family crowd around them like many of the artists today so their crowd is a small one but that doesn't deter them from an energetic performance that they're determined to love even if no one else were to (which isn't the case). They're loud and intense on early single The Sorceress and Reborn and What I Should Have Learned By Now from last year's Doubt EP and win over a crowd that didn't seem to know much about them before they started. 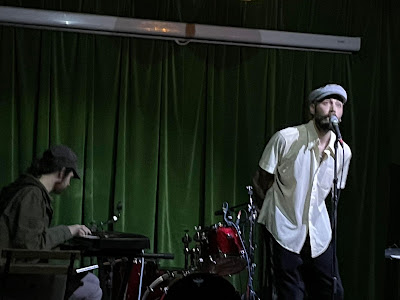 We head back to Gullivers for what we're led to believe is Salford duo Double Good Company's first ever gig. The nervous tongue running away with itself and almost apologetic chat of their front man would seem to confirm this. Their songs are dark and tinged with sadness and tragedy as he explains at length when talking about the premature death of a friend at just 34, but the synths and backing tracks provide an appropriate accompaniment to his voice and the stories behind them. Their cover of New Order's Ceremony is a really interesting and successful take and they finish on a song described as "happy but fairly depressing" but its chorus, almost a singalong, demands "free up your soul and let's go dancing," making music an escape, which feels very apt today. 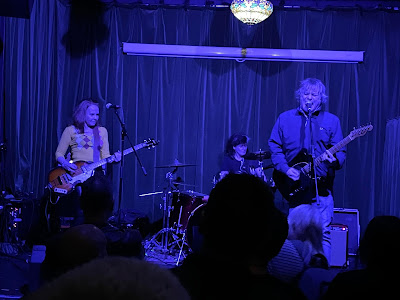 Cold Water Swimmers pack out the room and shatter the myth about bands losing something when they get to a certain age as a large proportion of the industry would suggest. They've still got the ability to craft songs like Summer Breeze, Be My Sunshine and Love Is Insane that possess instant hooks and with Chris's world-weary yet optimistic vocals sitting dead centre, the crowd are singing along throughout. With Carrie and Selina giving the songs huge energy in the rhythm section and with a crowd eating out of the palm of their hands throughout, theirs is the perfect late-afternoon festival slot. 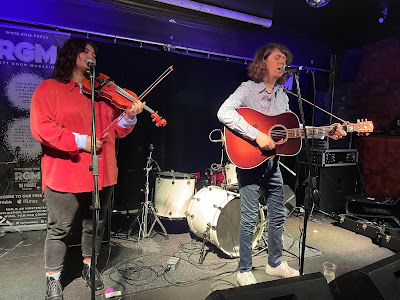 Next stop is 33 Oldham Street where James Holt steals the hearts of women old enough to be his mother (who's probably stood close to them) with his knack of producing songs that tug at the heartstrings such as Come Out To Play, The Wedding, Alone Again and Make My Day. Accompanied by Molly Becker on violin and backing vocals, he leaves you questioning why he's not a major star already. The songs have universal appeal, his voice is rich and emotional and it's impossible to dislike him. As he finishes with Whatever Happened To John, dedicated as many do across the day to the late John Hall, he's won over the first timers in the crowd as well as reminded the rest of us of his magic. 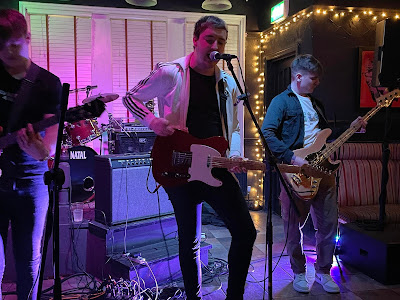 The Rose And Monkey is our next stop for The Notion, a band that we knew absolutely nothing about before seeing them. Like many new bands they've had their development curtailed by COVID, but they're a very strong live outfit already and with songs like What Were You Expecting, Crusade and debut single Wasting Time. Technically very strong with Kyle's powerful vocals, their songs possess verses that build into big choruses that'll endear them to the audiences who demand such things from their bands particularly round these parts. 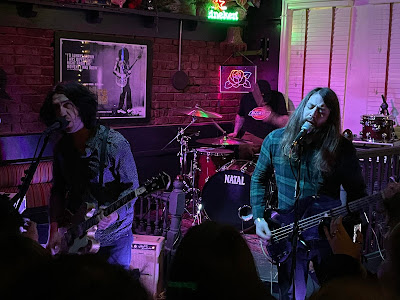 There's virtually no room for Hey Bulldog's set in their spiritual home of the Rose, something Rob alludes to in an emotional speech mid-way through where he remembers John Hall and reminds us that the festival is here to support Manchester Mind and mental health and how important the music community here is to that. Their six-song set suffers a little from technical issues that they have to improvise around, but that doesn't distil anything from the driving uplifting grooves that they create, the three of them operating as one, in perfect tandem with each other. Old favourite No Future Part I is an eight-minute long highlight, bringing synths into play alongside their traditional guitar / bass / drums onslaught whilst The People That You Know feels like a communal anthem for the whole day's events. 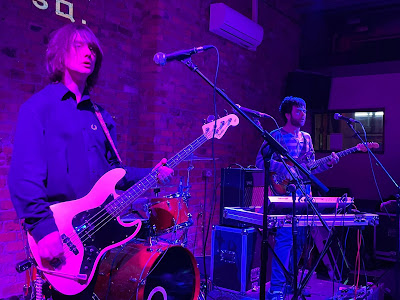 Déjà Vega are the unofficial headliners of the festival having recently filled Gorilla across town, many times the size of the intimate space of Off The Square which is turning people away before they've even started. On a roll following that Gorilla headline and a mostly sold out UK tour they fire through an hour long set based heavily on their recent second album Personal Hell and their traditional improvised finale of The Test which stretches around the twenty minute mark and sees Jack in the audience passing a cowbell around crowd members with varying grips on the concept of rhythm. The energy on stage floods the floor in front of them and the likes of Spitting Gas, Slow And Steady, Eyes Of Steel and the aformentioned The Test has a heaving mass of bouncing bodies moving as one. A band at the height of their powers right now, fulfilling all that potential that they'd demonstrated low down on bills in all the venues within a half mile radius of this place, they've spread their appeal far and wide as evidenced by the response tonight. 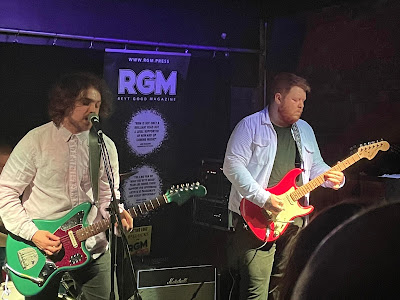 Our tenth and final set of the day was Proletariat's secret slot at 33 Oldham Street, another venue that's way too small for the sound and ambition of the band playing in it, testament to the pulling power of YANA around Manchester. Their set goes straight for the jugular, James is an animated front man, lost in the music and in particular the words that's he singing. The latest iteration of the band feels like the pieces of the jigsaw have finally be found. Connor makes the guitar playing look effortless until you actually watch him properly, whilst the rhythm section of Aaron on bass and Josh on drums gives the song the robust bodies they need. They've now got a body of songs that are made from rooms bigger than this - You're Free (To Be As You Are), Go Ahead and a glorious finale of Losing Control Is A Beautiful Thing the highlights of a set that never drops in intensity or quality. Their Gorilla headline in May promises to be special.
The final word on You Are Not Alone must go to the organisers though. These urban festivals are often poorly organised, beset by queues, technical issues and overruns and no-shows with little communication from the organisers. For an eight venue festival to run so smoothly and to feature a line-up that was so strong there were difficult clashes at every point of the day and night, even after multiple postponements, is a wonderful achievement and every credit should go to Ben Taylor and the team of volunteers who worked to put on an event that was worth multiple times the ticket price. Hopefully it'll become a regular event post-pandemic and make even more money for Manchester Mind, one of the most fitting charities you could think of for such an event.
Freeda are on Facebook and Twitter.
Spin Klass are on Twitter.
This Summit Fever are on Facebook.
Double Good Company don't appear to have any socials.
Cold Water Swimmers are on Facebook and Twitter.
James Holt's website can be found here and he is on Facebook and Twitter.
The Notion's website can be found here and they are on Facebook and Twitter.
Hey Bulldog's official site can be found here and they are on Facebook and Twitter.

Déjà Vega are on Facebook and Twitter. Personal Hell is out digitally now with vinyl preorders available on their store. Stream on Spotify here.