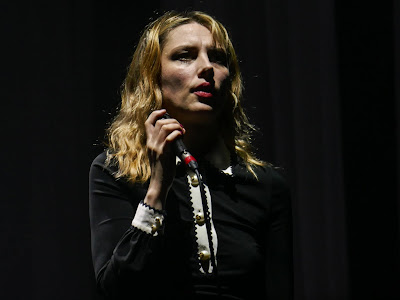 Wolf Alice's triumphant belated tour of the nation to celebrate the success of their first number one album Blue Weekend rolled into Manchester on Thursday night for the first of two sold out nights in front of an adoring audience from the barrier right to the back of the room hanging on every word and note with a band blossoming in front of our eyes. 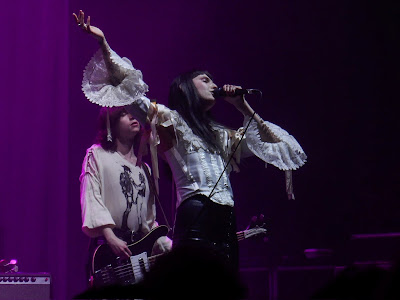 Lucia And The Best Boys open the evening and give a very strong account of themselves with a seven-song half-hour set that touches base with their biggest releases so far - Perfectly Untrue and Summertime which bookend the set - as well as new unreleased material that really stands out mid-set - When You Dress Up and the superbly-titled You're So Sweet You Should Die. Lucia is a great front woman, prowling the stage, a voice that expresses the anger, frustration and mischief in these songs to go with the performance that makes it clear she's living them out. They go down a storm with the Wolf Alice crowd, the response growing stronger with each track, not surprisingly, and by the end would appear to have won over a whole new batch of fans.
If there was ever any doubt that Wolf Alice are a band to fill arenas and headline the biggest stages at festivals, they're casting every single one of them aside with performances like this. Possessing a set of songs from across their three albums that span the divide between the anthemic, head down rock and roll and the deeply personal an intimate and with a stage show that both feels understated yet amplifies them, the momentum behind them now feels unstoppable. 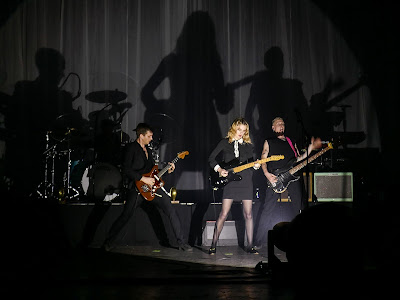 The eighteen song set is split down the middle, half from their number one album Blue Weekend, that finally catapulted them to major player status and the other spread across their first two albums My Love Is Cool and Visions Of A Life. With such a body of work now they can play a set of eighty minutes, leave crowd favourites out and never drop their level.
They can move effortless from the anger of Formidable Cool, the soaring Planet Hunter, through the achingly beautiful and relatable Safe From Heartbreak (If You Never Fall In Love) and the manic circle pit forming madness of Play The Greatest Hits to the majesty of the encore duo of The Last Man On Earth, which sees camera phones aloft lighting up the Apollo and Don't Delete The Kisses, which despite the bass being way too high in the mix, confirms its status as one of the greatest songs of the last decade. 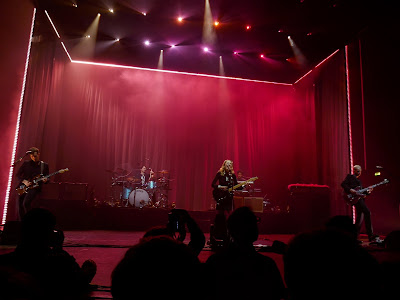 Their stage craft is perfect. Theo takes on the mantle of chief rabble rouser and addresser of the crowd between songs, his boundless enthusiasm in performance matched by Joff on the other side of Ellie, who alternates between with and without guitar, sings the slower songs from the raised platform at the back. One of the biggest factors in Wolf Alice's transition from ones-who-might to those-who-are is the way she's so self-assured in her performance and both the power and vulnerability in her voice dependent on the needs of the song and the subject in hand. She's a genuine heroine and role model for the thousands of young women in the audience, unaffected by the adulation, and a breath of fresh air compared to the bucket-headed lads living a distorted dream of resurrecting the 1990s.
From first seeing them at Dot To Dot in the summer of 2013 at the Deaf Institute, their rise has felt destined to come to this moment where they're finally recognised as one of the best bands in the country, but even more exciting is where they might go next. Blue Weekend and this tour is the moment where the butterfly changes colour before emerging from the chrysalis. The possibilities ahead of them now seem endless. 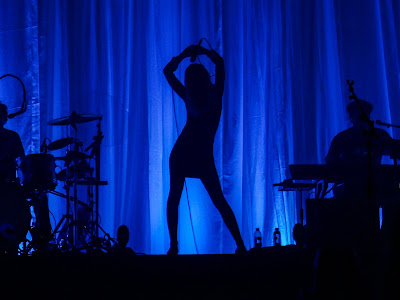 Email ThisBlogThis!Share to TwitterShare to FacebookShare to Pinterest
Labels: Lucia And The Best Boys, Wolf Alice