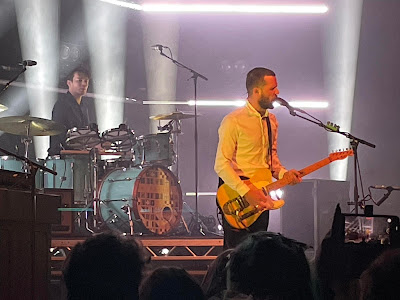 White Lies brought their extensive As I Try Not To Fall Apart tour of the UK and Europe to a full Manchester Academy on Friday night to showcase their new album as well as deliver some old favourites supported by VLURE.
VLURE open up the evening with a half hour show that confirms our belief that they can translate the passion and power of the intimate small venue gigs we've witnessed over the past six months to these bigger stages and that they've got the songs to do it. Their seven-song set features old favourites Shattered Faith and Desire as well as four tracks - Show Me How To Love, I Won't Run (From Love), Heartbeat and the title track - from their recent Euphoria EP - and a brand new one that we haven't heard before that discards any fears we had that they might have shot their bolt a little early with the standard of the EP. 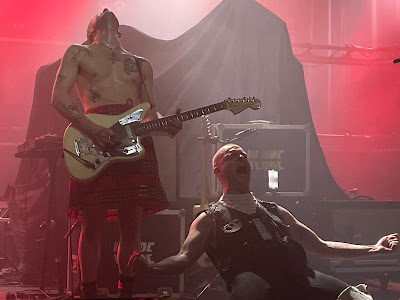 Hamish might be constrained by not being allowed to leave the stage to get closer to the audience and forge the physical connection, but there's still an enthralling intensity to his performance, whether it's when he lets loose dancing as his band take the song away from him, or when he mouths parts of Euphoria while his mic is elsewhere on stage, lost in the music. Conor is similarly animated in his kilt and new bright green hairdo. This might be a world away from the devoted hometown crowd at their recent King Tut's sell out, but this is the first step on them being revealed to a wider audience and getting used to venues of this size and the response they get suggests it's a success.
White Lies are old pros at this big venue game in comparison. From the minute they come on to stage to huge plumes of smoke and then confetti being fired out of cannons at either side as they kick into opening track Farewell To The Fairground to the final bars of a celebratory Bigger Than Us at the end of the encore where they repeat the confetti trick over a sea of raised arms they deliver a performance of impressive precision. They're still playing around with the setlist to get the perfect formula with a number of changes from the opening night in Nottingham as well as introducing the "deep cut" Fire And Wings to the setlist and premiering Step Outside from the latest album. 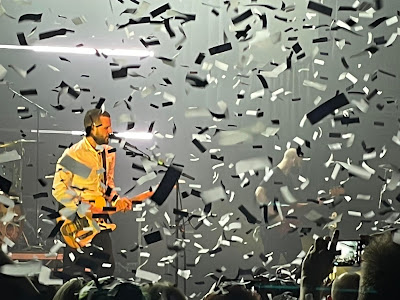 The set is heavy on their recent album As I Try Not To Fall Apart, which provides seven of the eighteen songs as well as 2019's Five contributing another three - a brave move given the audience response tells the story that White Lies, like many bands who emerged around the mid 2000s (see also Courteeners) suffer through no fault of their own from an audience wanting to hear that older more familiar material with the curse of streaming slowly killing off the album concept outside the dedicated minority that buy and listen to physical product in full. The new album is as good as anything they've done but falls down, where we're stood at least, those at the front seem lost in it, from the fact that people clearly haven't listened to the album the band are out promoting. Which is their loss.
The stage show, other than the confetti cannons, is kept simple but effective. They don't say much either, the band clearly want to focus on the music rather than platitudes and games (as they did noticeably by not playing to their absolute credit the ridiculous multi-formatting games to secure a higher chart placing with As I Try Not To Fall Apart). They ramp the lights up as the set comes towards its end and they roll out the big hitters, in particular Death that opens up the encore and Bigger Than Us that sends everyone streaming out of the doors buzzing. It's an old trick that keeps people coming back and White Lies play it smarter than most.
White Lies played Farewell To The Fairground, There Goes Our Love Again, Am I Really Going To Die, To Lose My Life, Blue Drift, Hurt My Heart, Is My Love Enough?, Step Outside, Fire And Wings, There Is No Cure, Big TV, Roll December, Unfinished Business, Tokyo, I Don't Want To Go To Mars, Death, As I Try Not To Fall Apart and Bigger Than Us.
White Lies' website can be found here and they are on Facebook and Twitter.