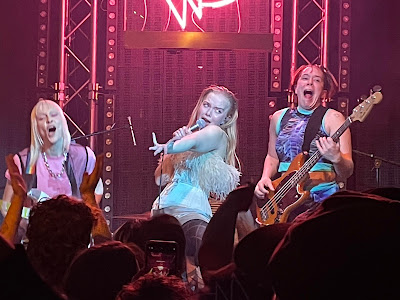 Dream Wife made a long-awaited return to Manchester on Friday night with a sold-out show at Gorilla supported by Lucia And The Best Boys and Chemtrails. A high-energy hour-long set saw them draw from both their albums and reveal some impressive new material whilst spreading their empowering message and having the time of their lives at the same time. 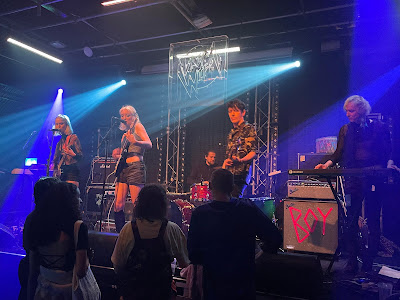 Chemtrails open the evening - "we're the locals" with a well-received set, their first as a five-piece for three years welcoming keyboard player Richie (of Furrowed Brow) into the fold. They centre around the dual vocals of Mia and Laura who provide both contrast and then a furious onslaught when they combine on songs. They operate in the main with the accelerator pedal pushed firmly to the floor with a set that takes heavily from their 2020 album The Peculiar Smell Of The Inevitable including opening track Blurred Visions and the set's highlight Uncanny Valley. They finish with their brand new single Eternal Shame to a strong response from an appreciative crowd. We'd seen Lucia And The Best Boys a few weeks earlier with Wolf Alice at the Apollo and tonight's set at closer quarters, with some of their own fans down the front singing along to every word including the songs Lucia introduces as new unreleased ones, gives a much better impression of what they're about. Lucia is an engaging front woman, to the point of coming into the crowd during the last song, and she lives out these songs with a stage presence that draws you into the performance as if she's acting out the story lines in front of her.  The band provide her that platform with big dramatic background on songs like the aforementioned new ones When You Dress Up and You're So Sweet You Should Die and singles Summertime and final track Perfectly Untrue. 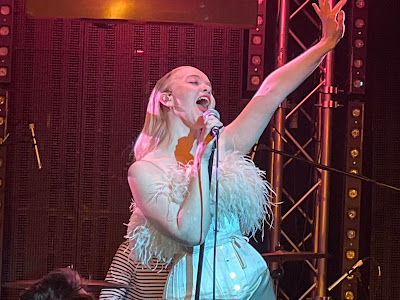 Dream Wife are utterly inspirational to anyone wanting to form a band. It's hard to recall a gig where the band look like they're having so much fun on stage, but they never shirk from getting their message across. Somebody's "I'm not my body, I am somebody" is a simple but all-powerful statement after Rakel has bid all the "bad bitches" in the audience down to the front before telling us that being a bad bitch isn't about gender but about looking after others, respecting boundaries and breaking down barriers. Two new songs - Hot and Leech - are particularly spectacular, the first offering the advice "don't date a musician, they'll see you as competition" while Leech reels off a list of toxic behaviours before demanding at full volume on repeat "HAVE SOME FUCKING EMPATHY" which feels like a four-word instruction manual on how to live your life. 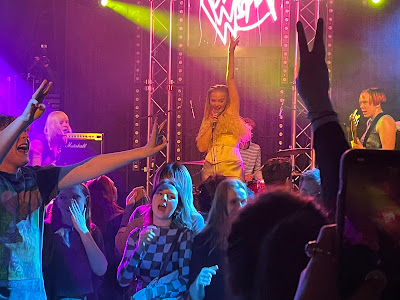 What Dream Wife do so naturally, and hence more powerfully, is entertain whilst spreading their message. Everything feels chaotic but absolutely under control without it seeming at any point staged. Alice and Bella, have a stand off during Sports where Rakel splits the audience in two down the middle and conducts us. Throughout their hour-long set she's beaming and pointing at anyone with whom she makes eye contact as she throws herself around the stage with a smile on her face that tells us she's having the best time ever and that we should too and the bouncing Gorilla mosh pit responds. We're tired at the end from just watching her, Alice and Bella's seemingly boundless energy and joy at being up on stage and performing. 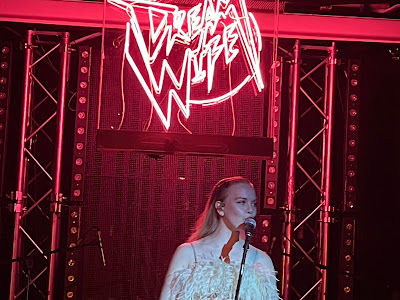 The set draws from both their self-titled debut and their 2020 follow-up So When You Gonna, which is getting its first tour outing two years later as well as three new songs and gives us the full Dream Wife experience - the playfulness of So When U Gonna Kiss Me and the finale Let's Make Out to the controlled anger and intent of FUU and Leech. Utterly compelling, completely inclusive, impossible to ignore and an absolute joy to witness, Dream Wife pretty much provide the perfect live gig experience.
Dream Wife played Hey Heartbreaker, Hasta La Vista, So When U Gonna Kiss Me, Hot, Temporary, Fire, Validation, Somebody, Curious, Sports, Leech, FUU and Let's Make Out.
Dream Wife's official website can be found here and they are on Facebook and Twitter.