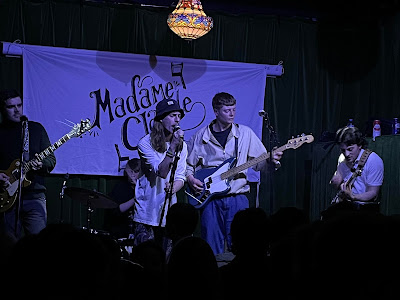 Without having a release to their name Madame Claude are causing a bit of a stir in Manchester with their own unique reggae-influenced songs that have had crowds dancing and singing along. We caught their first headline show at a sold-out Gullivers on Friday night supported by the contrasting styles of 25th Hour and Stone Mile. 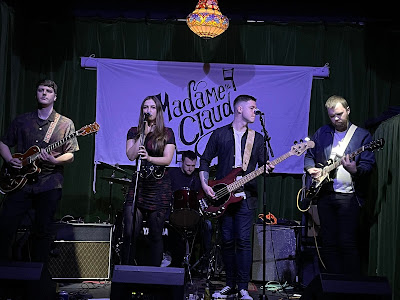 Stone Mile are the newest band on the bill even though their debut single Circular Quay was released last month and its follow-up Settle Down is scheduled for release on April 21st. Both feature in the set along six other originals that showcase Robbie and Scott's guitars and Ryan's bass that share lead instrument responsibilities throughout a varied range of songs that allow Rae to deliver vocals that have an impressive range and power and which become increasingly confident as the set progresses. By the time they finish on a brand new song Oracle, the highlight of a top quality, and Favourite Girl where she bids the audience forward for the last chorus, they've left a very positive impression. They're still learning their trade, but it wouldn't be a surprise if they were to go on to much bigger things because they have all the basic ingredients and aren't afraid to stamp their own personalities on their music to stand out from the crowd. 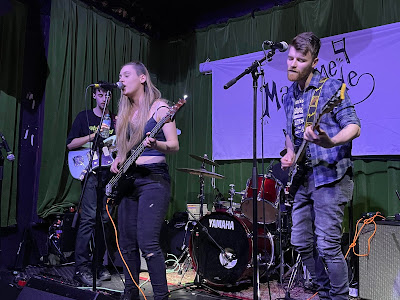 Standing out from the crowd is definitely something that 25th Hour have no issue with. The four-piece have that energy that, even if you're not a fan of their music, draws you in and forces you to pay attention to them. Whilst we're in one of our favourite rooms above a pub they play like they're headlining a major festival, clearly having a blast which transmits itself from the stage to the crowd, and as they finish on Figure It Out, Shae and Pete end up in the crowd with us. Jade, whether with bass in hand or with the freedom to move around the stage, is the centre point though, living out a rock and roll dream and her best life with these songs. They cover Nena's 99 Red Balloons, which feels somewhat apt right now, and make it their own. The crowd rightly love them. 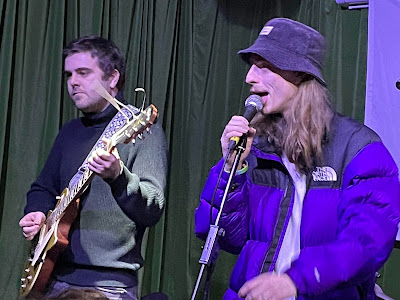 Madame Claude could be dreadful. The thought of white men past their teenage years playing their take on reggae with songs about why ostriches are better than emus who are arseholes (apparently), donkeys and chip shops at the seaside, someone called Billy The Kid and with Frank declaring himself as the King on another song, read fairly inauspiciously when written down, but the whole of the front half of the Gullivers crowd doesn't stop dancing when the music starts. And let's face it, that's part of the magical quality of music, people having a shared experience and letting their inhibitions down and Madame Claude are pretty insistent that you do just that - "let the boogie take control" one of Frank's sometimes random exhortations.
With no released material to date, a fifty minute set is a brave move but they manage to retain the audience's attention and energy throughout, reclaiming it when their slightly too long changeovers between songs threaten to take it away by simply starting the next song and the grooves, that feel familiar but which they put their own mark on, kick in. It's those grooves that keep the audience moving alongside Frank's half-spoken, half-sung vocals that trip fluently off his tongue as he rattles off long streams of lyrics with the dexterity of a rapper with long hair wearing the city's standard bucket hat headwear. They don't have an image per se, they just take their favourite bits from everywhere and create their own style.
They announce a single coming soon (but not the title) and another headline gig at Off The Square (but not the date as Frank admits) and it's this disorganisation that adds to their charm and connection that they make with their audience. They'll face harder nights in front of less partisan crowds than this, but a sold-out headliner this early on in their career is a pretty big test to have taken and they pass it with flying colours.
Madame Claude are on Facebook.
25th Hour are on Facebook and Twitter.
Stone Mile are on Facebook and Twitter.
________________________________