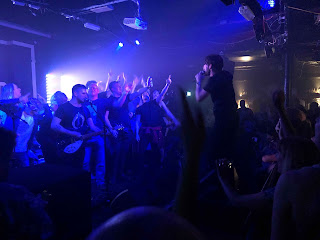 Red Rum Club's huge UK tour in support of their debut album Matador rumbled into Manchester on Saturday night at The Bread Shed for a celebratory show accompanied by tour supports October Drift and closer to home Cleargreen.

Cleargreen open up proceedings and they struggle with the sound for a while, at least out where we are stood. They do get a good response from the crowd though as their anthemic songs and energetic stage presence strikes a chord as the room starts to fill up. They seem to be growing in confidence each time we see them, Ali seems to be growing into the opportunity to play the front man role more actively and to get the crowd going. People and Paradise are two highlights, songs that might not be familiar to the crowd but with a hook that's easy to catch on to. They finish with a cover of Jorja Smith's Blue Lights, which they've transformed into their own indie showstopping finale against the odds. 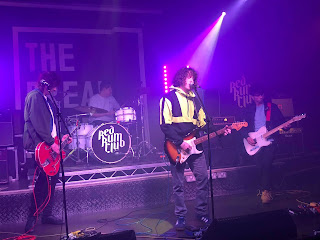 October Drift feel like they've been around forever now, either in their previous guise as The Darlingtons or in their current one. They've got themselves a small but growing dedicated fan base that have fallen for the sheer energy of their performance, the four of them not standing still for a moment through their half hour set. Whether that works for or against them is an interesting point as you might be so fixated on what they're going to do next that you'll miss the fact that they've gradually accumulated a mightily impressive bank of songs along their way, some of which don't make the cut because of time constraints. 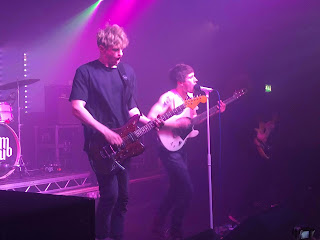 Whether it be established crowd favourites like Losing My Touch and Cherry Red, which appear early in the set, or the combination of their two most recent singles All Broken Down and Come And Find Me, that finish the set and which display a continuity of sound but a progression at the same time, these are songs that were made to be played to big rooms and the band act as if they are. Kiran plays one song stood precariously on the barrier in front of a mosh pit and by the end of Come And Find Me he has jumped into the crowd and joined us. The conundrum is how they make that next step up because it's time they did.

Red Rum Club seem to have risen out of nowhere. As Fran tells us before playing early single Calexico, just eighteen months ago they were playing to about twenty five people in Manchester and now, armed with their recent debut album Matador and a sell-out September show in their home city of Liverpool under their belt, they're riding on the crest of a wave. The number of Scouse accents we hear mingling with the local tells us a few have travelled too. 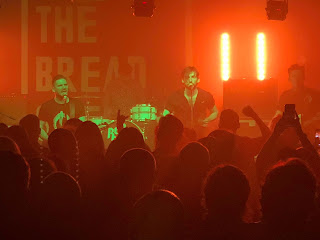 Their sound is an interesting one that's hard to pigeonhole and all the better for that. There's ubiquitous trumpet, almost at every turn, that adds a celebratory yet slightly off-key feel to the set and allows them to stand out from the crowd. There's all sorts of styles influencing them and they've got an energy and an engaging nature that the crowd feed off from the start which in turns fuels the band and it feels like we've stumbled into a private love in. Crowd favourites like Angeline and Honey are greeted with adoring cheers and a heaving mass of bodies jumping around to the tune that they call.

By the time they finish the set with Would You Rather Be Lonely? and they don't need to sing a word as the crowd take it and make it their own, as they do the stage with a huge invasion, it's impossible not to be impressed by how they've created connections, injected energy into their rapidly growing audiences and made people excited about what they're doing. Whilst they eschew all the games people play to try and look cool and focus on having a good time and, more importantly, making sure their audience do too, they've managed to capture the hearts of their home town and are well on their way to doing it across the country with successful nights like this.