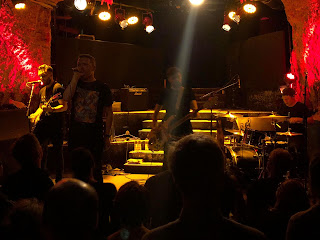 The Slow Readers Club played the penultimate night of their debut European tour to a packed room in the intimate Milla venue in Munich supported by local band Aggressive Swans. A set that covered all three albums as well as a potential future single was very well-received by a receptive crowd that reacted more as the night went on to the energy coming from the stage.

Aggressive Swans open up proceedings and they're an intriguing three-piece that goes down well with the local Munich crowd. They've fashioned a record around an imaginary old hotel, which suggests they slept through the Arctic Monkeys hype when they did the same thing last year, but we'll forgive them because they do it with real confidence and belief. They augment their sound with backing tracks, making them sound much bigger than the sum of their parts on 705 Guest Relations and when they pose the question whether the hotel can control their dreams and have fresh nightmares available on Dream Manipulation, they've got a very clever way with words. 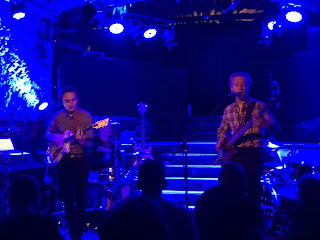 Every Teardrop and Babylon are equally well thought out, but it's on their final track, the magnificently titled Bloody Fistfights In The Streets Of Birmingham, where they experiment further with pedals and flute that they come into their own, an intriguing weirdness that suggests that they want to be more than your run of the mill indie pop band. They've got bags of enthusiasm to go with their undoubted talent so it'll be interesting to see how this concept they've created pans out.

There's none of the heaving drunken mass of bodies yelling READERS at ear-piercing volume which seems at first a little strange given that seems to be de rigeur at their UK shows, but this is a good thing as it allows us all to appreciate what a fantastic band they've turned into over the last two years, blossoming from one that were finding their feet unaccustomed to such accolades into one that takes visiting a city hundreds of miles from home where they don't speak the language and filling a 200 capacity venue in their stride. The crowd is a mix of hardcore fans who know every word delighted that the band have come to their city, a few travellers and a good proportion of curious onlookers who get drawn in as the set progresses. 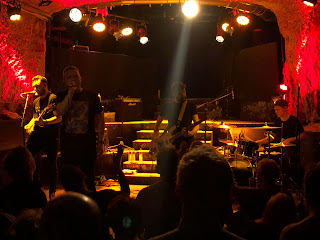 The unique layout of Milla means that David has been brought forward to the front of the stage and this provides a different dynamic, the work he does more clearly visible than from his usual position. The sound feels more raw, back to their roots, than it has for a long time and again this is a good thing as it allows a different perspective on the performance. Songs like Fool For Your Philosophy, Supernatural and Lives Never Known have an edge to them as the temperature in the room starts to soar as the energy transfers from stage to audience and is sent rippling back.

The language barrier provides a few amusing moments, particularly when Jim admits that their German is "scheisse" when thanking everyone for coming out to support them, but the crowd warm to their attempts at connecting in such a way. But of course it's the songs that do their work.

The German crowd seem more familiar with the Build A Tower tracks, but the response doesn't seem to falter when they delve back to the self-titled debut for Block Out The Sun, Feet On Fire, Lost Boys and the impromptu addition of Sirens to the encore that the audience demand, and when Cavalcade's Forever In Your Debt and Plant The Seed, despite an almost false start from the outro of You Opened Up My Heart, cut through the heat and lift the crowd with their anthemic choruses. New song The Wait feels like it's an old friend now, confident, bold and screaming single from the rooftops, with the chorus line "now that you're here, you are all that matters" providing the singalong element to a song that showcases a harder edge than previous releases.

The evening ends with On The TV and a bouncing front half of the room before the band are mobbed at the merchandise stand, always the sign of a successful trip. From those who've been to other shows, the reports have been similar, that The Slow Readers Club have quietly accrued a following across Europe and delivered some fine sets to win over the curious gig-goers and well as delighting those more familiar with them.