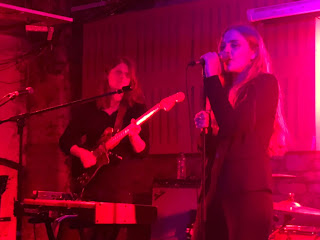 What Cosmo Calling have in bounds is the ability to craft beautiful harmonies and melodies in their song. With Phoebe and Harry sharing vocal duties too, they also have the ability to vary their approach, one taking the lead or them combining and it's something they do to great effect across their set. In fact the one time it doesn't quite work is on their (admittedly brave) cover of LCD Soundsystem's Dance Yrself Clean where those songwriting traits of their own that serve them well elsewhere in the set get subjugated to someone else's song. 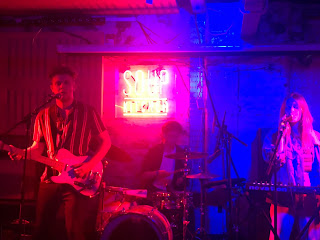 When they play their own growing list of singles - Bad Habit, Wait For The Rain, Rita, Cry Baby Cry and the most recent Blister - they get a very warm response from the crowd, many who clearly have come to see them. The songs are intelligently crafted, hooks all in the right place for maximum effect and almost irresistibly catchy and delivered with a real precision you'd expect from students of music. If we had one minor quibble, we'd like to see them let loose a little, ignore the voices that tell them they have to be note perfect and explore the possibilities of the songs more live and connect with each other because they clearly have the talent and the voices to do that.

MarthaGunn then give us a masterclass of how that works. Their songs feel fluid with a swirling groove coursing through the middle of them. With Abi, either on keys or with a tambourine in hand, at the helm with her rich soulful and expressive voice being backed by her four male counterparts either individually or in unison, their songs have an uplifting feel to them, tinged in hazy psychedelia and a love of the past, but sounding very much of the here and now. They're very much a band in the truest sense of the word, perfectly atuned to each other, either through knowing looks or the innate chemistry that comes when a group of individuals gel musically and the connection is immediate and natural. 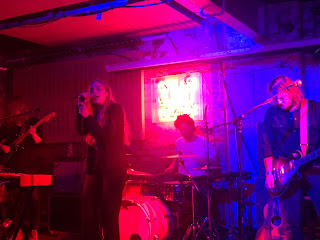 They've been quiet for over a year and they've spent the time well, "growing as a band" Abi calls it, honing their sound and creating a set of songs that have a kindred spirit and purpose. Older songs like Heaven and Hell For Leather feel invigorated and fresh, whilst the likes of Caught Up And Confused and We Don't Need Each Other have the magic of newness that lifts their game considerably. They even surprise us by stepping away from their instruments, other than a quiet acoustic, and bidding us forward to deliver a completely unplugged new song Ohio to complete silence other than the noise of the bar. It's a real contrast to the rest of the night, but it reveals all sort of possibilities for the band.

Saint Cecilia has been one of the standout singles of the year and live it lives us to that billing, its urgent flitting between a number of different song segments as thrilling live as it on record from the opening bass line through the build to the final chorus. That it's a highlight of the set but doesn't dominate the other nine songs is testament to the strength of the rest of the songs and the hard work that's clearly gone into putting together a set that flows beautifully. They finish with their early single Heaven which feels like a glorious bookmark to end the show, soaring, drenched in positivity and leaving you wanting more. They might have taken their time, but MarthaGunn are now ready, willing and able to blow people away.