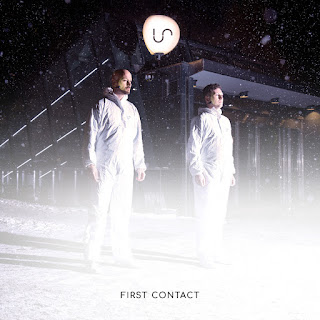 A singer from a late 90s band that got lumped in with the Britpop phenomenon and a Swedish producer and director may not seem like the most obvious musical companions, but Us's debut album First Contact shows that we shouldn't jump to such hasty conclusions. We caught up with the singer, Geneva's Andrew Montgomery, for a chat about how Us came into being, their writing processes and the way in which they present their art.

Could you introduce Us and tell us a little about how you came to work together?

Us is a Scottish-Swedish electronic music duo based in Stockholm, Sweden. We play emotional, song-based music that's reminiscent of Depeche Mode, Muse, The Cocteau Twins and the original Blade Runner soundtrack, plus something indefinable that's just Us.

I moved to Stockholm in 2015, and a few months after I arrived I went to a friend's barbecue where I had a drunken karaoke singalong to Rhinestone Cowboy and Leo was sitting there listening. He suggested we get together at his studio and try out some ideas and we wrote our first song together in about two hours flat. We realised we had our own vibe going and it was worth pursuing and four years almost to the day, here we are, with the release of our debut album First Contact. It's been a fantastic journey! Thank God for the late Glen Campbell!!

You come from very different backgrounds, how difficult was it to adapt to each other's ways of working?

Like I was saying above regards to the first time we wrote together, it was a very smooth process. Although I come from an indie-guitar background with Geneva, and Leo's history is with synth bands such as Lowe and Statemachine, we are both interested in the song above all else. There has to be a strong melody, a compelling narrative and a striking arrangement, regardless of whether it's hard rock, soft rock, hard house or synth. That's my feeling, anyway.

For me, I just love music, and I've become increasingly immersed in electronic music since I worked with Sean McGhee on my solo album 'Ruled by Dreams'. I love the space that electronic arrangements give me to sing into (though Geneva has always been great at 'space-filled' guitar songs). That said, we actually play live with a drummer and a guitarist so we are bridging the gap between pure synth and more band-based songs.


In the songwriting process, what would come first - the music or the lyrics?

There's actually no set process. More often than not we sit in the studio and Leo has perhaps come up with a synth squiggle that inspires me. I then come up with a melody and some vague outlines of words that take shape after I go away and think about it. That said, sometimes Leo has his own lyric and melody ideas - Technicolor is a great example of a good song that became much better when Leo brought his really uplifting, positive chorus idea to the table. That gave the song the defiance it needed, and stopped it from being too maudlin.

Sometimes I have lyrical ideas that I can then expand upon, but I'm less of a 'diary writer' than I was when I was younger. Maybe through lack of time, being more mellow or just trusting instinct according to the musical idea that's presented.

What inspired your lyric writing on the album?

Oh, the usual...Love, loss and interstellar travel!! :-) I do write from my emotions, though interestingly there have been a couple of songs (In Denial and The Healer) that have been sort of stream of consciousness, and I wasn't even quite sure what I was reaching for when I started singing. That's not to say they are gobbledygook - on the contrary, they reveal something a bit deeper going on that I hadn't consciously tapped into.

Mind you, Never Get Over was an occasion when I had this outpouring of lyrics to describe a personal situation that I'd gone through which had obviously been just percolating in my noggin till the time was right for it to emerge. Leo said something like: 'you got that one off your chest, didn't you?', when he saw and heard what I'd come up with.


The live videos on the internet are very visual. Is this more than just an audio project and can we expect more visuals to accompany songs as the album is released?

Good question, and glad you picked up on that. To be honest, the visual side is essential, especially when we play live and do live streaming through our partners RYoulive. I think the music is very visual and we're aiming for that soundtrack vibe. We haven't shot videos for all the songs, purely because it's been a lot of work for not much reaction, to be honest, but I think we'll do some more things down the line as we continue to promote First Contact. That's to be expected when you work with a video director, graphic designer and musical maestro like Leo Josefsson. He can do anything he puts his mind to!! And of course in this internet age, it's a great way to reach people who we can't necessarily afford to play to right now, seeing as we are pretty much funding this ourselves without backing.

The album was preceded by a collection of remixes of your early singles.  Often, the remix album is something that comes out later on after the regular album. What made you choose to release it that way?

Well, it was Leo's cool idea, and we thought it was a great way to reach new listeners in advance of the record coming out. Time will tell if it has that effect, but I really enjoyed the fact that people wanted to remix our songs, and then did such a great job. I'm really into the idea of building a musical network or community to fill the hole that record companies have left. We can all help each other if we try.


Are there any plans for a physical release of the album?

You're not the first one to ask that question, and I know a couple of people are frustrated that this hasn't happened. The thing is, when I released 'Ruled by Dreams', Sean and I did a CD run and there are still some CDs sitting there unsold six years down the line. Think about the environmental/resource aspect to that, as much as the financial implications of unsold albums.

I honestly think that people get too wrapped up in the physical release thing, and, as I near the age of 50, I have to say I've long since shifted to online listening. And it's also hard to make Swedes understand that not everyone likes to download! :-) That said, i do respect that some people like physical releases for sound quality and also for the keepsake/artefact side of things. So if there's enough demand, we'll do it. Maybe vinyl rather than CD, because the latter to my mind is just a glorified plastic ashtray with no elegance or art to it at all. Anyway, we'll look at it, as I realise it could be a good thing to have. I promise!

And will you be playing live dates to accompany its release?

We really want to do so. Again, the cost side and the fact we both have to hold down dayjobs has an impact, but if people can get their heads round a release not necessarily meaning an instant tour/product, etc, then yes, we hope to play in the UK and in Europe, for starters. Whether that happens soon or perhaps later this year/early next, I can't say just yet. But we'll continue with new Us-related project ideas and to stream live events via our Facebook page and our website usmusicspace.com -- we really appreciate the fact that people are so supportive, and that's what keeps Us going!!

How would you describe Us to someone who'd never heard anything by you before?

Us play widescreen, beautiful, electronic music that's the film soundtrack to the end of an affair or a broken dream, combining Leo’s epic wall of synths with Andrew’s distinctive three-octave vocals. It’s proof that machines can dream, and it’s all done with oceans of emotion. We want to make the soundtrack to the movie of your life!

Thanks to you, Dave and ETS, and everyone reading this. We really appreciate your support and interest. Keep in touch with Us!

The album is available from their Bandcamp.