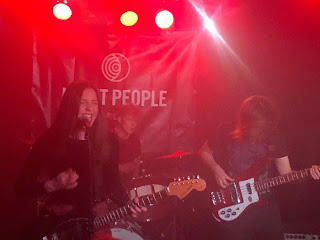 The Mysterines brought their tour in support of latest single Gasoline to Night People on Wednesday night for a hot and sweaty nine-song thirty-minute adrenaline rush of some of the most thrilling rock music being made by anyone today, supported by the blissful tones of Velvet Shakes and the angry post-punk of Tinfoils. 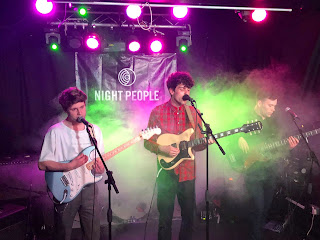 Three singles in and Velvet Shakes have a reputation for songs that are easy on the ear, laced with classic pop vocal harmonies as Scott and Josh share lead vocals, sometimes one leading and the other backing and others combining together. It works on singles The Love I Feel, Feel It Through Your Bones and the set-closing And I Like It. However, when they spread their wings on a new song called The Place That You Belong and they have another new one We're Not Alone that has immediate singalong qualities in the chorus, you sense that they're starting to broaden their horizons and add more strings to their bow. We even forgive them their slightly awkward between song patter as we file them under ones to keep an eye out for how they develop.

Tinfoils don't take any prisoners, early on in the set they declare "I think you're fucking stupid, you're joking. I'm not" with a straight face and no shortage of venom. They're angry about social injustice and equality, Royal Baby Machine taking aim around the time it was written at Harry and Meghan's wedding and dedicated to the new royal baby Archie because "we predict the future". The likes of Call The Abyss and Peeping Tom are raw and direct, George's vocals barking out their view of what's wrong with the world, often at such pace it's hard to keep up, and the three of them creating an almighty incessant racket with a real edge to it. 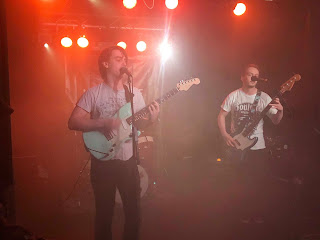 Of all the young bands around, The Mysterines are one that feel like they're the real deal. They've got an energy to them that's almost overwhelming in its intensity - whether it be Lia's razor sharp vocals that threaten to cut anyone who crosses her path, George's unashamed energy and mouthing along to every single word his band mate sings and Chrissy's drums that drive everything along but which might get lost in the overzealous use of the smoke machine were it not for the other two circling him and them blasting out the nine song set as one unified band.

They're remarkably confident already, helped by the low-key build they've had over the past few years, learning their craft supporting anyone and everyone and now ready to take on top billing, not just at their own shows, but blowing away more established bands who won't be able to match this furious onslaught on the festival circuit this summer. 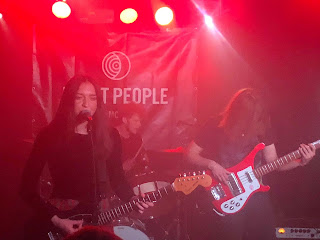 Whilst Bet Your Pretty Face and Gasoline provide the final denouement as Lia kicks over a mic stand and departs the stage at the end without saying a word as feedback reverberates around the room, they've got a whole set of songs that are likely to gatecrash their way on playlists across the country.  The insistent Love's Not Enough To Make Things Right, the confrontational PHT where Lia comes out to the crowd to sing eyeball to eyeball with the front row and their debut single Hormone which feels like it's taken steroids from the released version all pack a powerful punch straight to the jugular. Quite often with bands at this stage of their career you can pick out half the set and dispense with the rest that'll soon fall by the wayside, but the standard never drops through the set.

You sense the crowd becoming more responsive to them as the set progresses, but that comes as little surprise to those that have followed their path for a while. With good people behind them who are giving them the time to grow in their own skin, The Mysterines are eschewing the hype and winning people over the old-fashioned way of going out and playing live to them, simply blowing them away and making records so good that radio simply can't ignore them.

Their tour takes in Sheffield Cafe Totem (May 18) and Bedford Esquires (24).