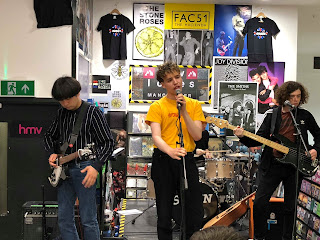 "I'm not going to come off stage and dance, because there's a thirty foot drop there" says Jonny before they've played a note. This is a good thing for many reasons, one being that it's become such a cliche these days for young bands to do it, but more importantly it allows us to focus on their songs rather than the act. And SPINN write very good songs.

They class themselves as "jangly dream pop" which doesn't tell us much at all, but what they do are craft songs that you end up tapping your feet to (we don't know the words) and appreciating their ability to craft something that sounds fresh and with their personalities stamped across it, which is some achievement these days in the log-jammed market of young male bands with big hair. And it's refreshing that Jonny sees fit to take the piss out of his own "frosted tips, 90s hair." We like that they don't take themselves too serious, joke about football ("United or City? anyone but Liverpool yeah?"), apologise to their mum for swearing and question how Notice Me, their final song, charted in Argentina, India and Spain but not in the UK.

The songs brighten our mood, whether it be the joyful upbeat Foundations or last year's single Bliss. They start off with Believe It Or Not, a song where they let the melodies and harmonies of the song do their work for them, keeping things simple, understated but with a genuine feel for what makes a great pop song. Sunshine has a similar, but different, vibe to it - Jonny's wistful vocals capturing the mood of the music his band mates create perfectly. On July, At A Glance, they show that they can slow things down without compromising that too. We leave impressed.

Email ThisBlogThis!Share to TwitterShare to FacebookShare to Pinterest
Labels: SPINN