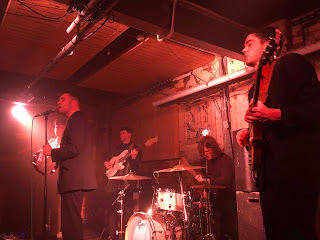 The Murder Capital headlined Soup Kitchen in Manchester on Friday night, one of the most intense forty-five minutes we've had the fortune to experience, a band that lives their songs and who connect through words and performance to emotionally compelling effect. Support came from Egyptian Blue.

On most nights we'd be walking out of Soup Kitchen telling how Egyptian Blue simply blew away the headliners, but tonight is a special night, more on that later. The Brighton-based four-piece have been around for a few years now and it shows in the instinctive chemistry they have in the band, not always easy when you're sharing lead vocals as Leith and Andy do and your songs possess the ability to turn round volte face when the audience is least expecting it and take off in a different direction and when your drum kit seems like it's about to fall apart at any moment. They grab the audience's attention right from the start and the unpredictable nature of their songs means that they hold on to it throughout their half-hour set even though their interaction with the crowd is limited as a number of the songs emerge from the end of the previous one. 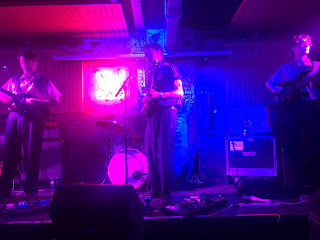 Recent single To Be Felt is one of the highlights of the seven song set, but it's followed by two new ones called Nylon and the fabulously titled I've Got It Good And That Can't Be Bad that show they're a band moving forwards. Collateral is also impressive, Egyptian Blue's song have a real incessant urgency to them, never settling still, flitting from one place to the next and their final song Contain It follows in that vein but on a different path. None of our group knew much about them beforehand, but everyone was mightily impressed.

The Murder Capital's reputation as a live band preceded them, but we weren't quite ready for what we witnessed. They start, four of them on stage, wreaking unsettling sounds from their effects pedals, building on the already fever-pitch anticipation as James makes his way on to the stage, on edge, ready to bare his soul to the two hundred or so folks who (mostly) give the five-piece their undivided attention. For Everything sets the tone for what's to come, songs that deal in the realest rawest most base of emotions, delivered by a man whose own torment and dark thoughts are replicated in many of those who have visited that head space at some point in their lives, and some who may be there now.

It's followed by their new single Green And Blue. Standard wisdom declares your single must be around three minutes. It clocks in at over six, a brooding intoxicating build that feels like it might swallow the room if we don't stand tall and resist even though the guitars and drums threaten to pummel you around the head until you submit while James declares "I'll correlate the blue and green, the green and blue, the green for you" with increasing agitation as the song takes its winding twisting route.

They take things down for Slow Dance, James sitting down on the stage as his band mates take the song off on its twisted tortured path. There's knowing looks thrown across the stage, moments where they eyeball, inches apart, encouraging, sparking off each other, living the songs like they're the final throes before they expire. 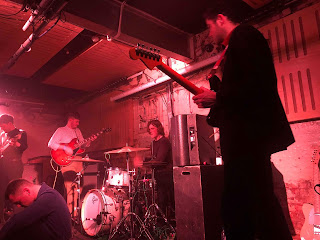 Before On Twisted Ground James make a speech about how important the band is, how in a world where we all feel tragedy at some points, friendships can stop everything falling apart. They've not been together as a band for long, but he tells us it's already achieved that. And the song is about that. And everyone in the room shuts up and listens, because the song's message is the difference between coming out of the dark or succumbing to it. Friendship does it, music does it, the combination of the two forms a shield. It's a tense song, as you'd expect from one that delves into the void to find answers. At the end of the night, a few us talk about it then we tell James how important the song was, even though it was the first time we heard it, something I don't ever recall having done before such was its immediate impact.

The sense of exhilaration, of having been part of what feels like a communal exorcism, is broken by the fighting beats of their debut single Feeling Fades, a song that takes a different approach to ridding yourself of demons, by forcefully expelling them in an explosion of energy. We're emotionally exhausted by the time they've finished with More Is Less and Love Love Love, two further explorations of the recesses of the human condition and coping mechanisms. Musically dramatic, emotionally revealing, the crowd are completely intoxicated by them in a way we've not witnessed for a long time.

We leave emotionally bruised and battered, yet knowing that things will be alright. Music magically tells you that you're not alone, that others have the same feelings and a gig brings them under the same room to escape together. The Murder Capital are providing a soundtrack to that, even in their formative phase as a band. There's a magnificent, and very rare, emotional clarity to them that facilitates a connection that will go deep and lasting. If they can hold it together, they're going to be one of the most important bands of our times.