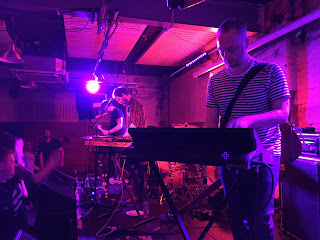 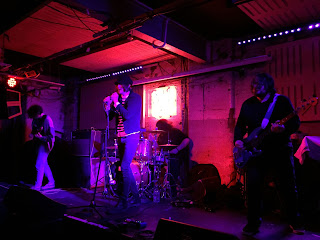 Two of Manchester's most adored and respected joined forces at Soup Kitchen on Saturday night, creating some gloriously uplifting sounds. Stuart Ralston was there.

“Thank you Weatherfield, we fucking love ya” announces singer Pete at the end of tonight's opening Purple Heart Parade set. Tonight, they are playing as a four piece as guitarist Sam wasn't available to play. However, Taous, Ste and Chris still produce the most wondrous, delightful pop. Surprisingly, they don't play anything from, what was in my opinion, the best EP of 2018 – The Lonestar EP – but the audience are delighted with what we do get tonight. There's a harder, more garage edge to their sound tonight and bypassing the tracks from the EP both demonstrates their versatility and their sheer bloody-mindedness! 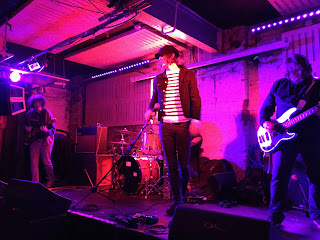 With every tune, the crowd fall in love with Purple Heart Parade all over again. Everyone present to witness their five-song set is a devotee.  The standout track tonight is the mesmerising Desolation Angel. Building slowly with a soft bassline carved out by PHP veteran Ste Woods, Desolation Angel is hauntingly beautiful. Out front, vocalist Pete Cowap prowls around the stage and is every inch a star.  We have long admired Purple Heart Parade at Even The Stars, and on tonight's evidence, they are going from strength to strength. We long to hear an album and these songs deserve to be heard by a wider audience.

By the time The Longcut take the stage, Soup Kitchen is packed. Their eighty-minute set delights the crowd from start to finish. There is a lot of love for them in the room. Each and every song is greeted with incredible adulation.

Opening with the pulsating Deathmask from last year's Arrows LP, frontman Stuart switches from drums to synths to vocals whilst his two band mates - Lee Gale on guitar and bassist Jon Fearon - create a ferocious, formidable sound.  Gravity has its roots in the early Factory sounds of Movement era New Order and Section 25 before the swirling feedback which greets the opening of Transition takes over. The synth heavy Popic has more groove than its predecessors and its infectiousness makes it an early set highlight. 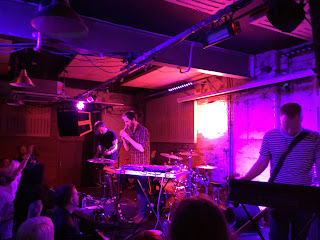 Taken from their debut album in 2006, The Kiss Off slows the pace down, but only just. The Longcut deliver an epic, intense and uncompromising set. It is hard to believe that such a glorious sound has been crafted by just three musicians. Tell You So, from the second album released in 2009, is a joyous cacophony. The disco infused Open Hearts gets the best reception of the night. Fractals shifts the sound up another level and is more drum n bass than anything else showcased tonight.

Tried and Tested Method see The Longcut perhaps at their poppiest and it's impossible not to be totally carried along by their epic, infectious sound. Quiet Life brings the set to a close although there is still time for an encore. There is an incredible atmosphere as The Longcut power through their set. Everyone present – either long standing fans or the newly acquianted  - are completely won over by them.