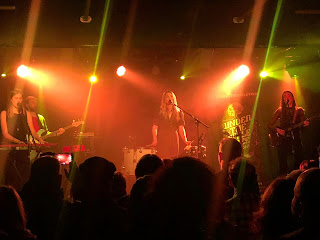 The Bob Harris-curated Under The Apple Tree tour rolled into Manchester Academy 3 for its penultimate leg on Monday night. Headlined by Wildwood Kin, revealing new material from their forthcoming second album as well as crowd favourites from their 2017 debut Turning Tides. Tour support came from the intriguing duo Ferris & Sylvester.

For a night billed as folk, country and Americana, Ferris & Sylvester take us on a real journey during their exceptionally well received set. Sharing vocals, Issy (Ferris) and Archie (Sylvester) captivate those down the front who are mouthing along the words to songs like recent singles Burning River and Sickness, encouraging audience participation and drawing those in from further back. There's an immediacy to these songs and an energy in the performance that's almost impossible to resist. 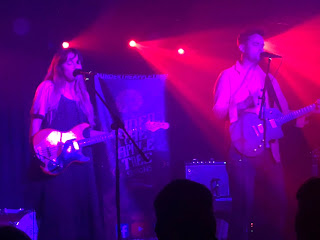 They go from the beautiful poignant latest release Flying Visit where you can almost hear the cracking in Issy's voice above the absolute silence in the room as she lives every word of the song about being away from a loved one and only getting fleeting opportunities to meet. It's like chalk and cheese to Sickness where Archie's guitar solo is more akin to something you'd witness at a virtuoso solo instrumentalist night than this type of night. They finish with a raucous, as much as you can be with just two guitars, two voices and a foot-operated drum, London's Blues and they get a well-deserved rapturous response.

They set a high bar for Wildwood Kin, especially with the expectation of new material from their second album that's in the process of being mixed and which will be available to pre-order in the next few weeks. The usual fear of an audience just wanting to hear their favourites and nothing else is quickly dispelled though by the as-yet-unreleased opener Headed For The Water. It's an attentive crowd, willing to listen and absorb, a real welcome change to what's becoming the norm these days. 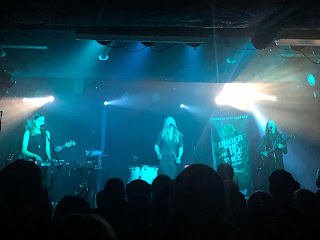 That attentiveness though prevents the crowd from missing anything, from subjugating the spectacular harmonies that Emillie, Beth and Meghann create, either one by one, or in any combination of the three of them. It feels natural and intuitive, even more so on the new material that's fresh and exciting and delivered with a steely confidence that they might just have finished a record that will put them on the bigger stages they've shared with the likes of Ward Thomas during the campaign for Turning Tides.

Many of that album's favourites are present and correct - Steady My Heart, Run, On And On and Hold On - and are accompanied with explanations from Meghann about the songs which gives a fascinating insight into who they are and how they work and how important family and friends are in such a tight knit family band. Of the older material Warrior Daughter, the song that first saw them playlisted several years back, feels reinvigorated, as if the new material around it has challenged it to stay vibrant and relevant. Their take on Stevie Wonder's Higher Ground from last year's Voices Of Equilibrium covers EP is an interesting one, laying their style on top of one of the all-time classics

The new material suggests that they're set for bigger things. There's a real confidence that flows through Wake Up Sleeper and Never Alone, an expansion of their horizons, a fleshing out of their sound without losing the intricacies of their vocal harmonisation and the raw country stylings of their music. The latter is an introduced as being written as a reaction to the exhaustion of touring and being exhausted and a head full of woes that need to be shared to relieve the burden. Beauty In Your Brokenness, preceded by an explanation of the Japanese concept of kintsugi, where broken items are pieced back together with gold to make them more beautiful, still retains the tenderness of the songs from Turning Tides, if anyone was worried they were completely changing tack with the new record. 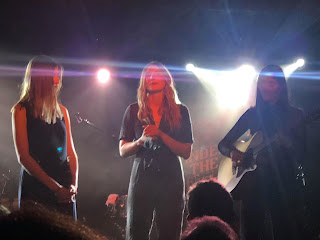 They finish the night unplugged, with just Emillie's fragile acoustic guitar and their voices, almost whispering The Valley to a crowd that's moved forward to listen in complete silence other than the sound of an odd camera shutter. It's a magical end to an evening where Wildwood Kin laid down the foundations for their next record and reminded us of the beauty of their debut and the ability to make an emotional impact through the combination of voices and hold an audience's full and undivided attention for an hour, a real rarity these days.

They conclude the Under The Apple Tree tour at Norwich Waterfront today (May 7), before a summer of shows at Catton Bearded Theory Festival (May 24), Hereford How The Light Gets In Festival (25), Scorrier The Great Estate Festival (June 1), Port Eliot Festival (July 27), Beauly Belladrum Festival (August 2), Plymouth Laufest (4), Fairport's Cropredy Festival (8/9), Weyfest (Sept 17) and a band date at Exeter Lemon Grove on November 21.