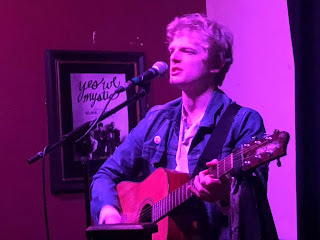 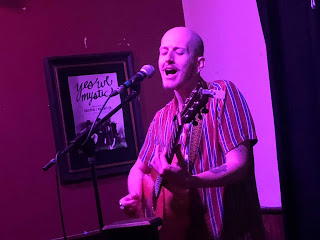 The intimate surroundings of Gullivers' downstairs lounge provided the perfect setting for two talented solo performers on Sunday night as Hull's Tom Kay and Manchester's own Jack Wakeman shared the stage in front of a respectful crowd that was there to listen and appreciate the music rather than the sound of their own voices.


Tom opened proceedings and modestly told us that he hadn't played any solo shows for a long time and not since the release of his latest album Where Do We Go From Here? from which he takes most of this set. He jokes about not knowing the songs he wrote and recorded, but that's through modesty rather than having forgotten his own songs. It's that modesty, coupled with a warm humour and the way he explains the stories behind his songs that make you instantly warm to him. 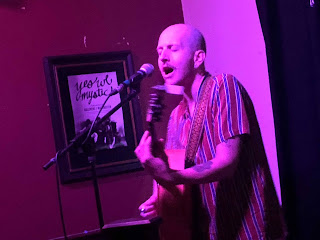 He's also got an exceptionally rich emotive voice that works perfectly in the sparse but appropriate set up in the back room. When he sings about his fiancee's illness in Fractured Times or reminisces about his native Hull on Humber Skyline, after telling us about being asked to play the song on a freezing cold Humber Bridge for 6 Music day, it adds depth and connection with them and a songwriter we're witnessing for the first time. Whilst he jokes at times that all his songs are miserable as he tunes up between them, it feels more like he's just accurately observing the reality of modern life rather than wallowing in pity, especially as he leaves us with a verse and chorus of The Smiths' There Is A Light That Never Goes Out.

Jack's recently decided to ditch all his monickers and play under his own name. Whilst he's played in so many bands around town over the past few years, and BC Camplight for whom he plays bass is here to give him moral support, his solo material has taken a back seat, but it seems like he's starting to get his shit together with the release of an EP and a couple of You Tube recordings. Naff All and Room 103 make an appearance tonight, beautifully constructed songs that distil his talent and desire to create something special into something that works as a stripped down acoustic song.  Morning Light is a descriptive lament of the problem of sleep paralysis that captures the frustration and effects of the condition. 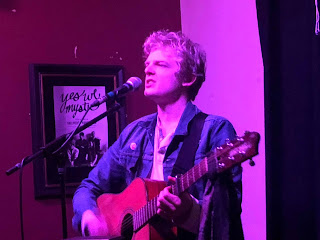 He jokes that the array of pedals he has at his feet were brought for just one song - Paper Flowers - yet it suggests that he has many more options at his disposal as a solo artist should he choose to use them rather than build a band or alternate between the two. He finishes with two covers - Bert Jansch's Poison and an impromptu encore of John Martyn's May You Never - both delivered with a respectful nod to the originals whilst putting his own personality across them. Solo artists are having a hard time getting heard right now, but Jack deserves our attention.